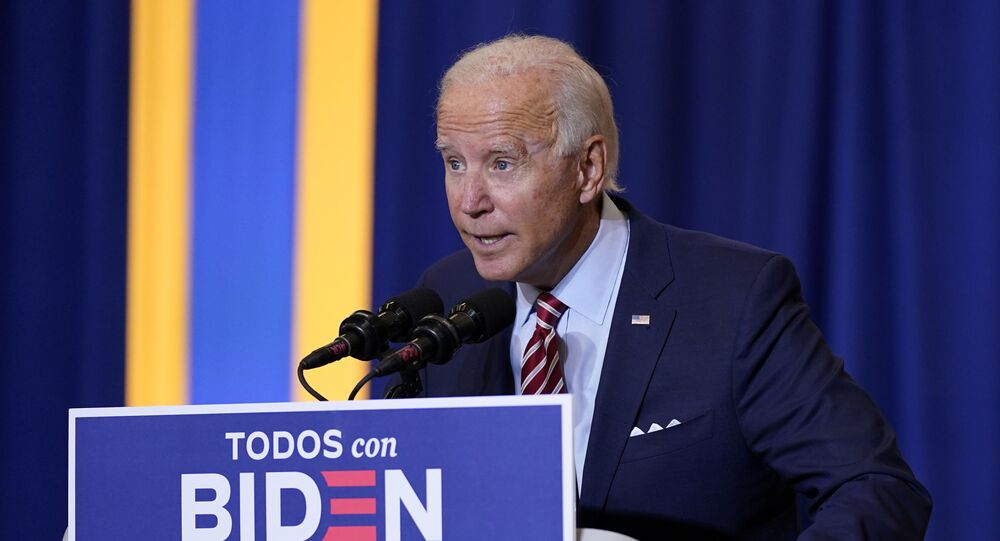 Last week, the former US vice president raised eyebrows and caused concern among social media users after he gave an interview to the Pod Save America podcast, where he said that the Democratic Party had put up “the most extensive and inclusive voter fraud organisation in the history of American politics”.

Not a week goes by without Democratic presidential candidate Joe Biden making a gaffe resulting in social media users bursting into laughter, but this one seems to top all of his previous slip-ups. In a video posted on Twitter, the 77-year-old is speaking at a rally in Pennsylvania. Biden starts his sentence by saying "I’ll lead an effective strategy to mobilise", but what he says at the end of the sentence is a total mystery...

​Netizens offered various explanations for the gibberish the former vice president had spoken.

The speechwriters for that part didn't notice a cat walked across the keyboard.

See that’s a stutter. He tried to say “I’ll lead a strategy to Mobile true international pressure”. He uses this line when talking about North Korea.

​Some users said they were planning to vote for Trump, but then reconsidered after Biden’s speech.

I was all about #Trump2020 until Biden discussed the major issue of trunalimunumaprzure in the United States. I am now voting for Biden

As a trunalomunimaprzure activist I'm ridin with biden

​Many thought that the Democrat was repeating some code or speaking Ukrainian and referring to the Hunter Biden scandal. The New York Post recently published a story that alleges Joe Biden’s son Hunter had arranged meetings between his father and an adviser to the board of the Ukrainian gas firm Burisma and that Joe Biden was involved in his son’s business dealings overseas, something that the politician has repeatedly denied.

Excuse me sir, could you repeat the nuclear code one more time please?

I believe he is saying the Ukrainian word “trunalimunumapzure” which historically means “Launch a meth lab with my boy and launder millions of dollars while the media suppresses all of it!

​Others praised the former vice president for speaking on such an important subject.

finally someone is addressing trunalimunumaprzure

Parents, please speak to your children about trunalimunumaprzure, if not someone else will.

​Others contended that the 77-year-old is suffering from a serious medical condition and is unfit to be president.

I've had slips while talking to a large group. But what we just saw isn't a slip or tongue-tie moment. That was a symptom of a serious medical condition affecting Mr. Biden's brain. Don't mock him, he's quite ill.

WTF is this guy even saying. He is not fit to be president sorry

​Still others thought that Biden was pronouncing the name of a medication.

Please consult your physician before beginning a regimen of #trunalimunumaprzure pic.twitter.com/FBjCGEVf3u

Ask your doctor if Trunalimunumaprzure is right for you

​Can you guess what Joe Biden was trying to say?