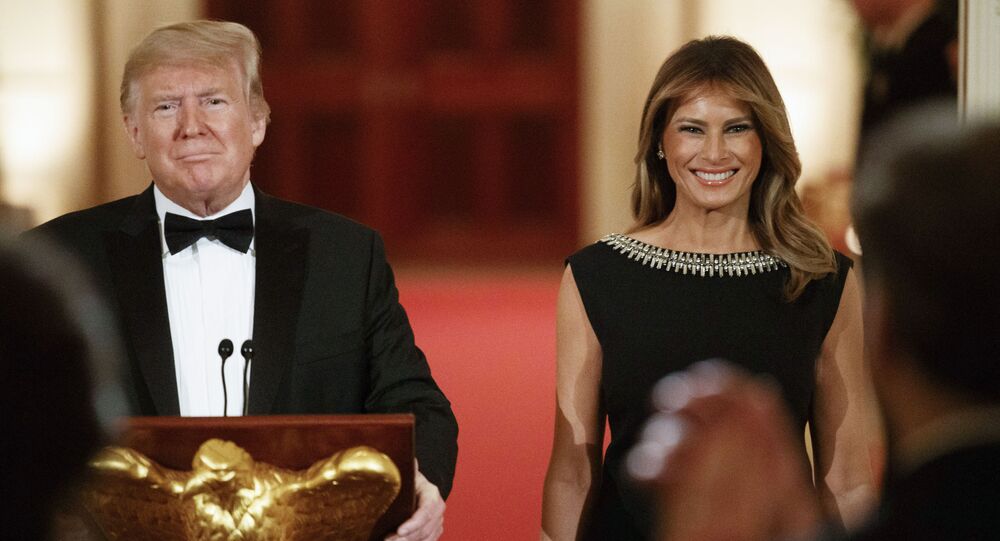 FLOTUS Melania is known to be reserved when it comes to demonstrating emotions, and it appears her reputation is so “settled” that smiling pictures of her turning up in the media and internet immediately cause public scrutiny.

With public opinion dead set that Melania Trump never smiles, a recently shared photo of a mask-less FLOTUS grinning aboard Marine One has added fuel to a bunch of conspiracy theories, which have arguably been around ever since her husband assumed office in January 2017.

As the wildest of theories goes, it is occasionally (or actually often?) not Melania standing by POTUS’s side, but her body double, be it an intelligence agent or event-going doppelganger. This time, the chatter was again about who the smiling Melania-esque lady beside Donald was.

Some said the grin likely belonged to the much-loved male star of the sitcom Bewitched, Dick Sargent, while quite a few suggested it must Sacha Baron Cohen, most famous for adopting fake personae for satirical purposes.

“Good luck finding any photos of Melania smiling like that”, one incredulous Twitterian posted, adducing pictures of Melania typically not smiling or offering a delicate smile with her mouth shut.

“Today’s photo of a fake Melania. They think we won't notice this?”, another tweeted, with a third suggesting it could be actress Catherine Hicks, best known for her role as Annie Camden on the long-running television series 7th Heaven:

“Melania is incapable of smiling because of all the surgery, Botox, and her miserable disposition. This body double is probably Hicks”.

Maybe he truly doesn’t know this is Fake Melania. Maybe Real Melania is somewhere having a vodka martini sighing a breath of relief and smiling as she eats her olives. pic.twitter.com/PGn8rei5dO