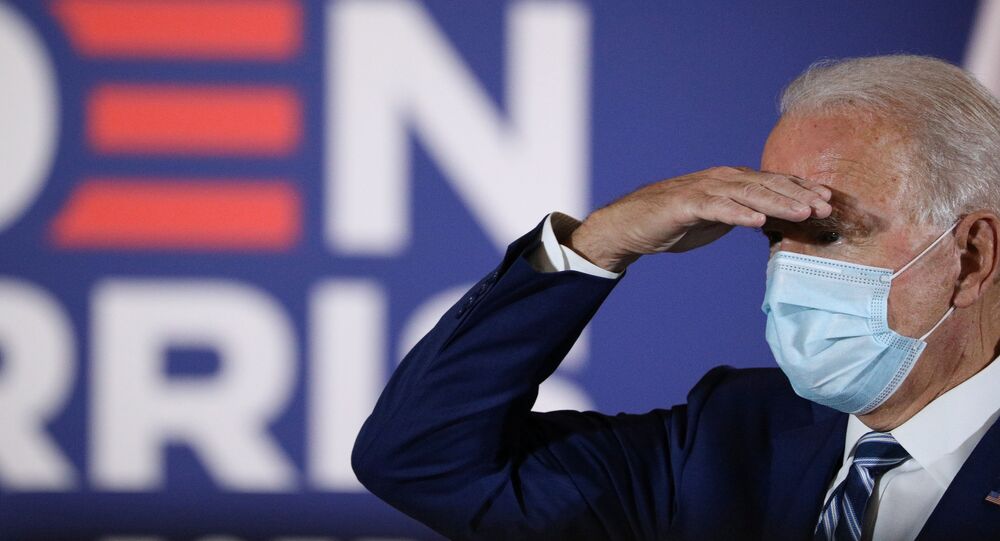 Joe Biden has in recent days told more than half of Americans not to vote for him and said they don't deserve to know if he will pack the Supreme Court if elected to ensure rulings in favour of his Democratic Party.

Social Media users are saying Democratic presidential candidate Joe Biden has had his “Basket of Deplorables” moment – although they can’t agree on which gaffe was it.

They have pointed to Biden’s challenge to the majority of Americans who think they’re better off now than under the Obama administration not to vote for him, his blurting that voters “don’t deserve” to know if he’ll pack the Supreme Court, or apparently calling President Donald Trump's supporters the “dregs of society”.

Former secretary of state Hillary Clinton coined the phrase "a basket of deplorables" in September 2016 to describe those unwilling to elect her as president as "racist, sexist, homophobic, xenophobic, Islamophobic - you name it." Her remark is widely seen as contributing to Trump's victory that November.

On Tuesday Biden reacted to a poll showing that 56 per cent of voters considered themselves better off now than when he was vice-president to Barack Obama. Asked why they should vote for him, the Democrat said: "Well, if they think that, they probably shouldn’t."

Some said it was rich for the Biden to tell voters "their memory is not very good" after he forgot which state he was speaking in and which office he was running for on Monday.

© AP Photo / Carolyn Kaster
'Biden for Resident': Trump Trolls 'Sleepy Joe' Photoshopped Into Nursing Home
On Friday Biden snapped at a local ABC news reporter who pressed him on whether he planned to pack the Supreme Court with liberal judges if elected to overturn the current conservative majority

"You've been asked by the viewers who are probably Republicans," Biden responded angrily. "No they don't deserve..." he said before pulling himself up.

​Last week the Trump War Room Twitter account posted a video of Biden from 2018, in which he appeared to call Trump supporters the "dregs of society" in a speech on LGBT rights to the annual Human Rights Campaign gala dinner.

​"This time they, not you, have an ally in the White House," Biden said.

The presidential hopeful has also drawn fire for dusting off his old anecdotes about a pro-segregation Democratic senator, who retired in 1978.

Despite his apparent recent short-term memory loss, Biden dredged up reminiscences of arch-‘Dixiecrat’ Mississippi senator James Eastland during his rally in Ohio on Monday.

Although the Democratic candidate did not mention Eastland by name at the poorly-attended rally in Toledo, a Twitter user posted video of Biden telling the same story in 2012, when he explicitly referred to the late senator.

20 years later Eastland infamously told then-president Lyndon Johnson that the 1964 disappearance of civil rights workers Mickey Schwerner, James Chaney, and Andrew Goodman - whose murders were the basis of the film Mississippi Burning - was just a "publicity stunt" and suggested the three had gone to Chicago.

Biden had previously been criticised for his nostalgia for Eastland and other segregationists during the Democratic primary campaign by black Senator Cory Booker and his eventual running-mate Kamala Harris.

Meanwhile the “Basket of Deplorables” insult that lost Hillary Clinton the 2016 election was gaining popularity among Biden supporters, enraged at the looming appointment of Judge Amy Coney Barrett to the Supreme Court and large public rallies in support of the president in the midst of the coronavirus pandemic.