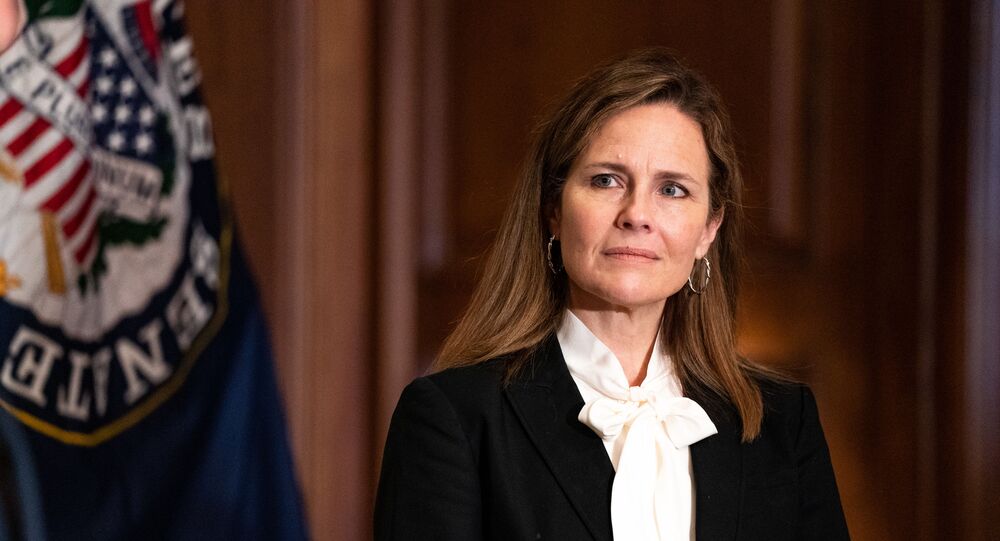 'How Low Can the Left Go?' Fury as Senator Asks Amy Barrett if She's Ever Sexually Assaulted Anyone

The second day of confirmation hearings for President Donald Trump's Supreme Court pick, Amy Coney Barrett, began in the Senate Judiciary Committee on Tuesday. Democrats have repeatedly slammed the president's choice, arguing that the nominee should be picked by the winner of the 3 November election.

Amy Coney Barrett, President Donald Trump's Supreme Court nominee to replace the late Justice Ruth Bader Ginsburg, said on Tuesday that she had never "made unwanted requests for sexual favours, or committed any physical or verbal harassment or assault of a sexual nature".

Barrett also denied that she had "ever faced discipline or entered into a settlement related to this kind of conduct".

This came in response to Democratic Senator Mazie Hirono's question on the matter as Trump's nominee was grilled by Republicans and Democrats before the Senate Judiciary Committee during day two of Barrett's confirmation hearings.

Netizens immediately clashed over whether it was appropriate for Hirono to ask such a question, with some insisting that "it's something she's asked all nominees".

Its something she's asked all nominees. So everyone calm down, she's just doing what she is legally allowed to do.

This is a standard question for any confirmation hearing…

She asks every Supreme Court nominee this.

"This is a standard question for any confirmation hearing", one user argued, while another tweeted that "it's a relevant question".

Many, however, berated Hirono for what they described as "disgraceful" behaviour, with one Twitter user wondering "how low the left can go".

If you're related to Hirono, you should be embarrassed with that asinine statement/questions! How in the hell is this person part of the committee?!! My goodness!! 🤦🏻‍♀️

Sometimes I wonder how low can the left go? Then I remember the Marianas trench which is the lowest point on Earth is probably the equivalent of a pothole compared to a liberal’s morale compass

Amazing and scary to think a question like that comes from 1 of the 100 people who run our senate.

Hirono needs to be immediately removed from the Judiciary Committee! Absolutely despicable of her to ask that. But she is a Democrat, so it’s not surprising. 😡😡😡

This appalling line of questioning has to stop, unless there is clear evidence to support it.

That is outrageous and sick. Those people have no common decency or shame. Does that really leave any doubt about which party is deserving of your vote!

The intelligence level of some of these democrats is scary! How did they ever get to Congress n never mind, I don’t want to know!

So insane, how can you be an elected official and ask a question like that. Show some respect! 🙏🇺🇸

"Absolutely despicable of her to ask that. But she is a Democrat, so it's not surprising", he added.

The procedure is expected to last four days, with the Republicans hoping to confirm Barrett ahead of the 3 November presidential election and seeking to strengthen a 6-3 advantage in the country's highest court.

Earlier, Democratic presidential nominee Joe Biden called on the Senate not to confirm any Supreme Court candidate until after the November vote.