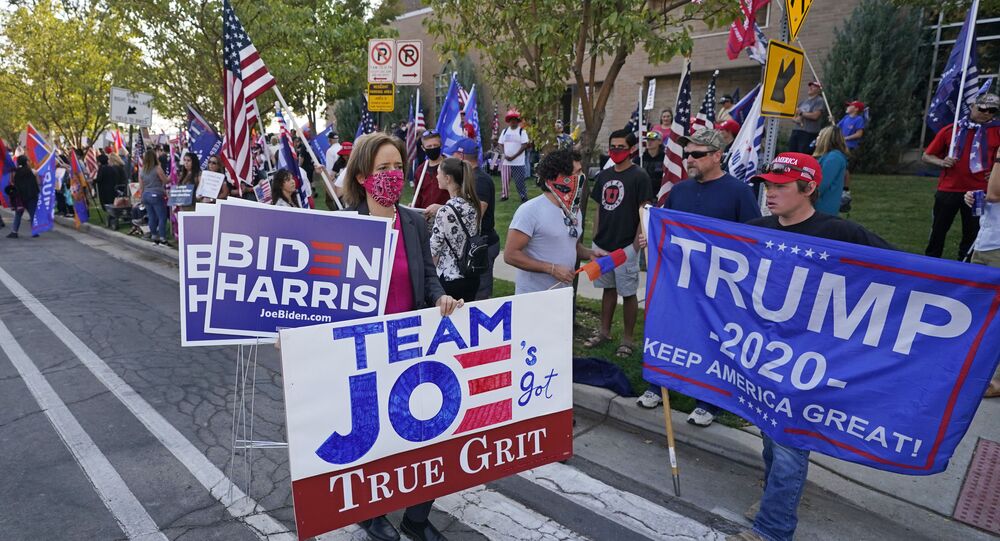 Disappointed by the first Trump-Biden presidential debate, which turned out to be more of a fiery squabble than a political discussion, many have placed their hope on tonight's standoff between the vice presidential candidates.

It seems that 2020 could bring the vice presidential debate to another level, since what has normally been considered a political sideshow event now draws thousands of netizens to their screens and sets the #VPDebates hashtag trending.

Hours before California Senator Kamala Harris and incumbent Vice President Mike Pence take the stage in Salt Lake City, Utah, people on social media seemed to be preparing for the debate even harder than the contestants: and while for some it's best to check up the takeaways in the morning, others have set up watching parties - virtual, of course - and cannot wait for the show to begin.

While the Trump-Biden debate turned into chaotic turmoil as the two insulted each other all night and Biden told Trump to "shut up", the Harris-Pence face-off is expected as a battle of actual political programs. However, for many users, the exodus seems to be obvious.

​Some expect Harris to roast her Republican rival on the Trump administration's response to the coronavirus pandemic, with others recalling the Senator's keen interrogation of US Attorney General William Barr.

When watching the debate, there’s only one thing to consider. Sen. Harris will need a plexiglass sheild to protect herself from the head of the Coronavirus Task Force.

​The most enthusiastic viewers are getting ready for the debate with special party-like ideas, suggesting "VP debate bingo" and a drinking game.

Play this and then text your ex about their plan to vote! #VPDebate #VPDebate2020 pic.twitter.com/5Lg05N0sOd

Top of my #VPdebate Bingo card:
- Pence insinuates that Harris expects to become President under the 25th Am.; Harris shoots back, "Your boss is the one trying to off himself with Coronavirus"
- Harris attacks Pence for violating HIS OWN principles
- Bonus if she says "servile"

​Memes are predictably flocking the hashtag on VP debates.

​Other netizens voice their support for Pence, regarding him as "a real gentleman".

Mr. Vice President, wish you the best for tonight debate! You will beat her pretty well! Go go go!

That is a real gentleman. Mike Pence we love you and are voting you back in for 4 more years. Mike Pence is a kind, caring, respected man who wants to make our America the best it can and will be. This man went out to see this business burned down. Harris bailed the arsonist out.

@Mike_Pence Knock them dead tonight! Peel that onion back and expose “Harris Administration’s” Socialist-Communist agenda. God be with you! ❤️ Best VP ever!

​Those who do not voice their support for anyone in particular are still expecting the debate to be "insightful".

I’m looking forward to tonight’s VP debate. @Mike_Pence is always a gentleman and always has his thoughts together.@KamalaHarris is as liberal as they come, but handles herself well and can be intimidating.