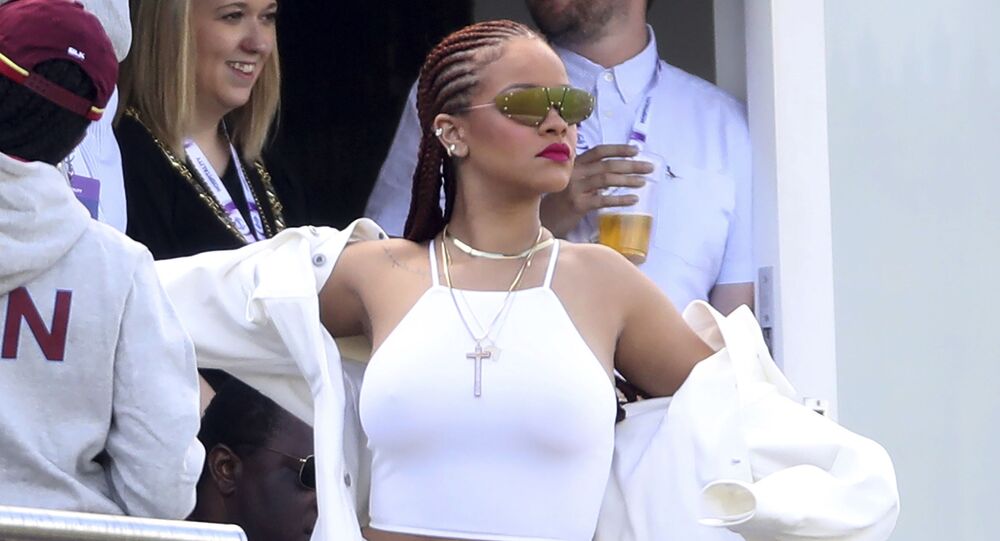 In a much publicised show segment, models clad in the budding designer’s colourful underwear walked the catwalk dancing to "Doom", a 2017 song by producer Coucou Chloe that recited a verse from the hadith - a record of Muhammad’s words and actions.

Rihanna issued an apology to the Muslim community on Tuesday after being bashed for using a song that recited lines from the Quran in her 2020 Savage X Fenty fashion show last week. However, not all of her religious fans unanimously accepted it.

rihanna has used music where a hadith is being used as lyrics for her fenty LINGERIE show. this is very disrespectful and should be apologised for. if this was a bible verse the world would have erupted. please share pic.twitter.com/wAiyLQuNCT

"I'd like to thank the Muslim community for pointing out a huge oversight that was unintentionally offensive in our savage x fenty show", Rihanna wrote in her Instagram Stories. "I would more importantly like to apologise to you for this honest, yet careless mistake".

Rihanna admitted understanding that "we have hurt many of our Muslim brothers and sisters", stressing that she's "incredibly disheartened" by her and her team's move.

"I do not play with any kind of disrespect toward God or any religion and therefore the use of the song in our show was completely irresponsible! Moving forward we will make sure nothing like this ever happens again", the hitmaker assured.

The apology was issued on Savage X Fenty's official Instagram account — one of the artist-turned-designer's many business ventures universally praised for its inclusivity and that have at all times included hijab-wearing women in their marketing.

Models donning Rihanna's lingerie walked the catwalk and danced to "Doom", a 2017 EDM song by London-based producer Coucou Chloe, during a segment of the Savage X Fenty Vol. 2 show. The remix was called out in the past and reignited backlash for being sexualised in the fashion show.

In Islam, it is forbidden to mention Allah's name, the words of the Quran, or the prophet Muhammad impolitely and for commercial purposes. The hadith, from where the said lines were borrowed, is a record of Muhammad’s words and actions - which Rihanna's followers rushed to draw her attention to, urging her to self-educate and apologise for the wrongdoing.

"Religion is not an aesthetic", one fumed, with another pointing to the "disrespect" the production team explicitly demonstrated towards believers:

"For a brand that claim to be diverse and accepting, it is really disrespectful for you not educated yourself about what you're using during your fashion show. You have hurt a community and I hope you take accountability for your action", the user wrote at length.

"I love u [sic] and u’re [sic] the queen, but using a Islamic hadith as a track in ur [sic] show is rude and disrespectful to all of ur [sic] Muslim fans across the globe. I love u [sic] but that was just not it. Especially [because] u [sic] stand for diversity", another fan stressed.

Producer Chloe likewise took to Twitter to address the backlash and vowed to promptly remove the song from streaming services.

"I want to deeply apologise for the offence caused by the vocal samples used in my song 'Doom'", she wrote. "The song was created using samples from Baile Funk tracks I found online. At the time, I was not aware that these samples used text from an Islamic Hadith", she said taking "full responsibility" for her failure to research the words properly.

However, not all Muslims who were following the story online appeared to be satisfied with the apology.

"I still have the right to be mad. Don't f****ing tell us to close our mouth and stay silent and move on", one user hit back, with another stating it all depends on how much of a Muslim one is:

Many more, however, asserted that the song being taken out of the show is absolutely enough, admitting that the music queen seems to be sincere in her comments:

@ everyone who thinks this isn't enough: the show is currently being edited to change the song so if that isn't enough for anybody idk what is.

As long as the mistake was admitted and acknowledged. All’s forgiven

I accept your apology, love you riri. I understand how you could’ve overlooked the song. 🥺💗💗