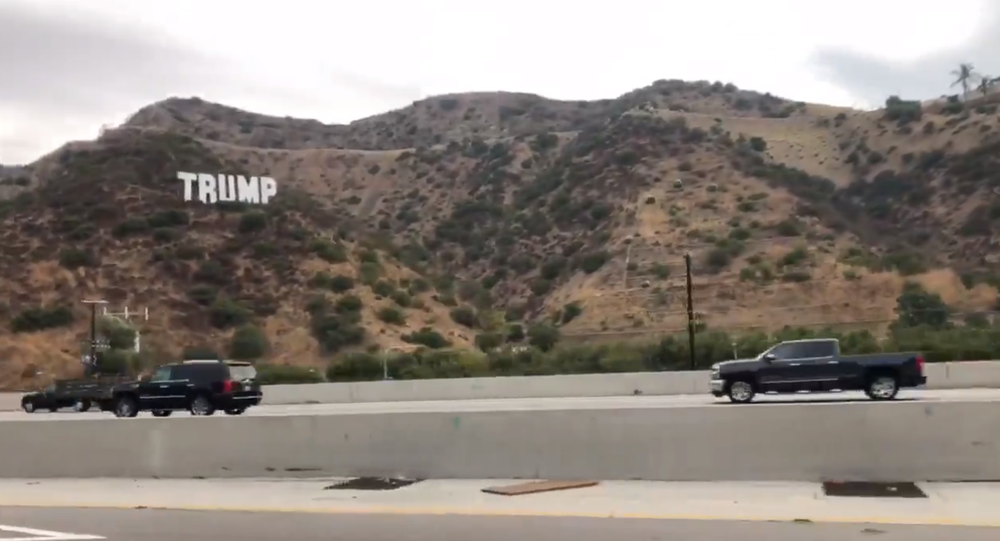 The extravagant Trump-supporting sign did not last long on the 405 freeway in California, as it was quickly dismantled by crews before the morning rush hour on Tuesday, because it was a "traffic hazard".

Commuters driving in the very early morning on California's 405 freeway near the Getty Museum, in a city considered to be one of America's most liberal - had a rare chance to enjoy a Hollywood-style sign saying "Trump", erected just above the road in the hills.

Reports suggested that the sign had been put up there some time during the night, between Monday and Tuesday. The installation was said to be unauthorized, even though, as Lauren Wonder, chief public information officer for the California Department of Transportation, noted, it was put up on privately-owned land.

It is not known who is behind the installation, which was soon dismantled by workers responding to reports of a "traffic hazard". The sign was gone by 9 a.m. local time, although some commuters were quick to catch a picture.

Someone put up this Trump sign overnight along the 405 freeway, near the Getty. This is right in the middle of what’s largely considered one of the most liberal cities in America. pic.twitter.com/KlSdao4mwk

The Hollywood-style Trump sign may have been surprising to see in the morning for residents of southern California - a largely liberal region that voted blue since 1992. In the 2016 presidential election, California designated 55 electoral votes out of 55 for Clinton.

Video: Trump Thanks Supporters for Well Wishes in First Statement Since COVID-19 Diagnosis