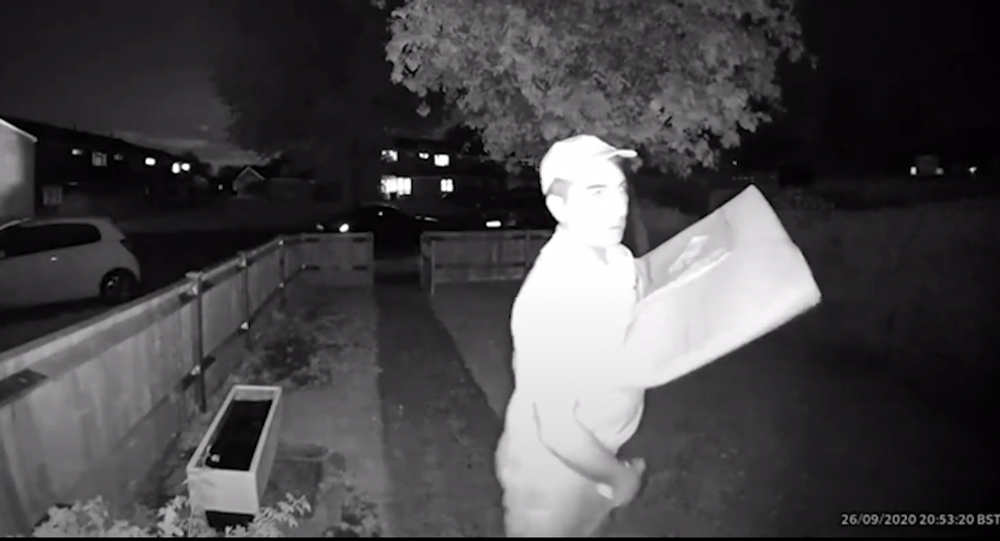 Caught by a surveillance camera, the incident, said to have taken place in Great Missenden village in Buckinghamshire County in the southeast of England, was observed by customer Jonathan Terry and a friend as they waited to eat ice cream ordered online from Domino’s Pizza.

A Domino’s Pizza in the United Kingdom launched an investigation into a delivery driver caught on camera rubbing an ice cream container on his crotch before handing over the order to the consumer, according to South West News Service (SWNS).

In the video from a home security camera, the delivery man appears standing in front of a house in England’s county of Buckinghamshire waiting for the customer, Jonathan Terry, to open the door.

After knocking the door, the delivery man rubs the Ben & Jerry's ice cream on his crotch moments before Terry opens the door, with the driver greeting him, “Hellooo”.

Thirty-one-year-old Terry told SWNS that said that he made the order while watching a movie with a group of friends at home. He narrated that they were not aware of what happened with the delivery driver until receiving a phone call from his girlfriend to notify him about what she saw in a home security camera 20 minutes previously.

“About 20 minutes after we received the delivery we went to get the ice cream out and weirdly I had a call from my girlfriend,” Terry said. “She said ‘I hope you haven’t eaten the ice cream that Domino's have sent you.’ She then told me to go and look at the Ring doorbell [footage].”

The customer told the outlet that he was horrified to see the driver rubbing the ice cream on his crotch before he opens the door. He said that his friends were also angered by the incident.

“It felt quite disrespectful and very vile,” Terry said. “My housemate said he felt violated — he was not happy.”

Terry said that he approached the pizza chain and complained about the incident. The company apologized to him and reportedly offered him complimentary coupons, which were rejected, as Terry declared he would never again make a purchase from Domino's.

“I said, ‘After what your delivery driver has done I don’t feel safe and don’t want to oblige to ever buy an order from Domino's again,’” Terry said, quoted by SWNS. “I want to make sure people are aware of what has happened.”

In a Monday statement to Fox News, Domino’s spokesperson Rachel Townsend said that the company’s administration was “extremely disappointed” to the see one of their workers breaching “the trust our customers rightly expect” from the restaurant chain.

The spokesperson said that Domino’s has launched a probe into the delivery driver’s misconduct.

“We were extremely disappointed to see this film and our driver’s behavior is unacceptable. We expect high standards of behavior at all times and clearly this individual has breached the trust our customers rightly expect from Domino’s,” Townsend said. “We are conducting a formal investigation with this team member as a top priority. We have apologized sincerely and are working to resolve this issue with the customers so we can put this right.”