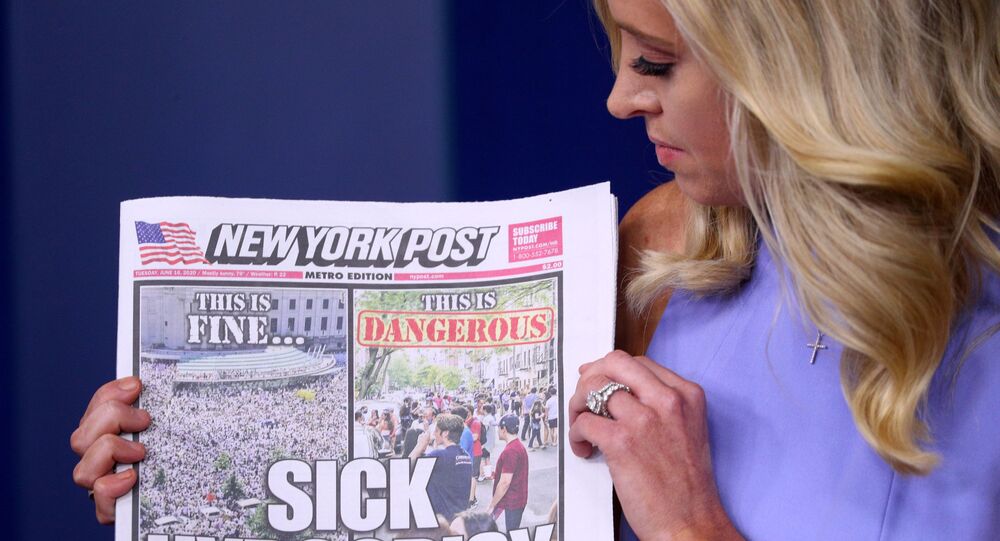 Various White House staff and associates of US President Donald Trump have been confirmed to be infected with the COVID-19 coronavirus following an announcement from the president that he and the first lady, Melania Trump, have come down with the deadly virus.

Morning host Pat Kiernan made a serious gaffe on Monday when he accidentally said that the White House press secretary, Kayleigh McEnany, had tested positive for “cocaine” — as he meant to say "COVID-19".

“Another member of Donald Trump’s inner circle testing positive for cocaine", Kieran said during the Monday broadcast, before quickly correcting his mistake, seen in a clip posted to Twitter.

​The Trump administration's press secretary confirmed on Monday that she had tested positive for the COVID-19 coronavirus and was beginning quarantine.

Some Twitter users found the trip-up hilarious, while others suggested that only those who were "high" would continue supporting the US President.

He corrected himself but that was absolutely hilarious

I think the NY1 anchor Pat Kieran got it right the first time: "The WH Spokesperson Kayleigh McEnany tested positive for Cocaine."

Only someone high would keep supporting Trump, who's unreasonable war on masks contributed to you getting infected with Covid.#WeAllMakeMistakes

​There were some who directed their criticism at the journalist, however, calling him a "knuckle head" for his mistake.

​McEnany and the White House communications director, Hope Hicks, are among the many White House staffers who have been recently diagnosed with the COVID-19 coronavirus.

“Do we need to change our reporting approach and just list the members of the inner circle who DON’T have COVID?” Kiernan tweeted after McEnany's announcement.

On Monday, soon after McEnany's statement on her tests results, Trump confirmed that he leave the hospital after spending time being treated for COVID-19 at Walter Reed National Military Medical Center, following an announcement that he and his wife had tested positive last Thursday.

I Feel Better Than I Did 20 Years Ago! Trump Set to Leave Hospital Today