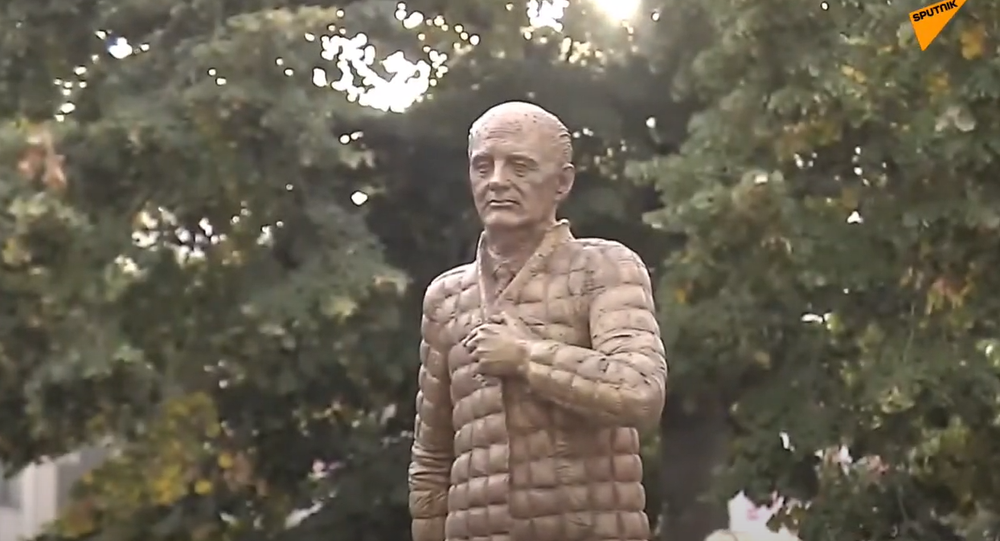 ‘Looks Like Bill Murray to Me’: Internet Chuckles Over Odd-Looking New Statue of Gorbachev

Saturday marked the 30th anniversary of German reunification, when the German Democratic Republic, colloquially known as East Germany, formally ceased to exist and was incorporated into the Federal Republic. German officials past and present have credited Soviet leader Mikhail Gorbachev for his efforts in making the dream of German unity a reality.

Internet users had some unflattering things to say about a new statue dedicated to Mikhail Gorbachev which was unveiled in a small German town on Saturday as part of Unity Day celebrations.

The monument, erected in front of the town hall in Dessau, a town about 125 km southwest of Berlin, portrays a life-sized version of the former Soviet leader striding confidently forward, a large key (to peace, presumably) in one hand.

Financed by private donations, the monument was commissioned by the town’s former mayor, and is meant to symbolize Gorbachev’s personal contributions in supporting German reunification and ending the Cold War.

But the sculptor’s artistic choices, including the decision to don Gorbachev in what looks like a flannel jacket or sweater, has caused a flurry of complains online.

“That is not a good statue,” one concerned YouTube user who watched the unveiling ceremony online complained. “I think the same,” another added. “What a mockery!” a third chimed in. “Is that supposed to be Gorby? I remember him very differently,” yet another wrote.

Bill Murray, is that you?

Dozens of users suggested that the statue looks more like comedian and actor Bill Murray than the famous former leader of a nuclear superpower. “It looks like Bill Murray to me,” one user teased. “I thought it was Bill Murray! Boy that would be awesome,” another mused. “What? Why is Bill Murray so special over there?” a third joked.

Others took issue with the statue’s gait, and the odd choice of clothing.

“I’m not a great fan of statues but this disgusting excuse is a travesty. Whatever Gorbachev was, he was a strong looking upright charismatic man. This looks like a poor old man dressed in a cardigan, not long for this world, who accidentally put on his grandson’s joggers,” one person grumbled.

“It looks like a vatnik,” another suggested, referring to the Russian cotton wool-padded jacket which has become the source of endless online memes. “Why is Gorbachev wearing a puffer jacket?” one confused user asked.

Finally, a few people also took issue with the very idea of putting up a monument to someone who’s still alive, and who has been blamed for bringing his home country to its knees.

“Are you crazy? To erect a monument to a traitor? For shame! Perhaps one should study history properly before making such decisions,” one user wrote. “To the wretched a wretched monument, like a mockery,” another added.

© Sputnik / Юрий Абрамочкин
Moscow Won a ‘Reliable Partner’ in Europe Thanks to German Reunification, Retired Diplomat Suggests
Serving as Soviet leader between 1985 and 1991, Mikhail Gorbachev introduced a series of broad-ranging reforms to kick conservative communists out of positions of power, transform the USSR’s economic system, and promote political reforms which would lead to direct parliamentary elections and, inadvertently, the rise of nationalist and separatist sentiments in the USSR’s republics. In December 1991, the leaders of the Russian, Ukrainian and Belarusian republics met in secret in a state dacha in a Belarusian nature preserve and signed an agreement declaring that the USSR had ceased to exist. Gorbachev formally resigned on December 25, 1991.

Although widely praised abroad as a visionary globally-minded leader for his efforts to end the Cold War and increase global cooperation on issues like health and climate change, Gorbachev has also been heavily criticised in his home country for the failure of his political and economic reforms, which led to the elimination of the Warsaw Pact security alliance, the end of the USSR’s superpower status, and the collapse of the country itself. Former US President George H.W. Bush would later describe Gorbachev’s December 25, 1991 resignation and the end of the Soviet Union as “the best Christmas present the world could ever get.”