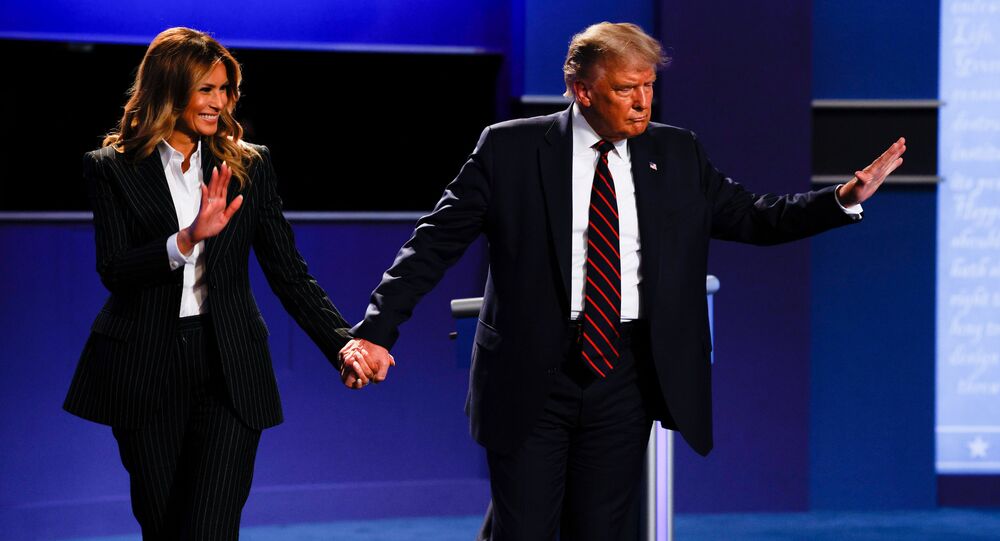 A fresh video arguably demonstrating the specifics of the first couple's relationship has joined a vast collection of others, which the wider public has been eagerly discussing since Donald Trump assumed his top government role in 2016.

Melania Trump's reserved gesture – namely a handshake with husband Donald Trump after the first presidential debate ahead of the November election has stirred up an online storm. A clip shows 50-year-old FLOTUS come up to her husband and greet him with a formal handshake, with the president then casting a quick glance at his wife and then looking away, before the first couple pose for a snap. Meanwhile, POTUS’s Democratic rival Joe Biden could be seen giving his better half a warm hug as soon as the debate drew to a close.

© REUTERS / ALEXANDER DRAGO
‘No Thank You’: Melania Trump Reportedly ‘Scoffed’ at Ivanka for Planning to Be President

Videos of the moment have since made countless rounds on the internet, racking up myriads of likes.

Sometimes contrasting how each expressed love speaks as much volume as words (and damnit words effing mattered tonight on stage). pic.twitter.com/0YWK4fQI9j

One bewildered user commented that the first lady showed "no emotion at all", with another suggesting the gesture would be more suitable for mere acquaintances, rather than "a loving couple".

Best takeaway from the debate came at the end as @DrBiden warmly greeted @JoeBiden vs the cold handshake and fake smile #Melania gave that orange clown. #Debate2020

Anyone notice that Melania so loved her 'husband' so much that she got a handshake from him. LOL

Jill gives her husband a hug and a kiss and Melania offers up a reluctant handshake. Bruh. #PresidentialDebate @NPR @debates

However, a number of others assumed the handshake appropriate for the event.

"Melania showed decorum. It is how I would act under the same circumstances", one Twitterian noted.

The widely chewed-over moment between the married couple came soon after Melania hit the headlines as she was seen "dodging kisses" from her husband at a campaign speech in North Carolina last month. Earlier, there were also quite a few occasions since POTUS was inugurated in 2017, when clips of "snubs" and horrified looks between the pair entered the spotlight.