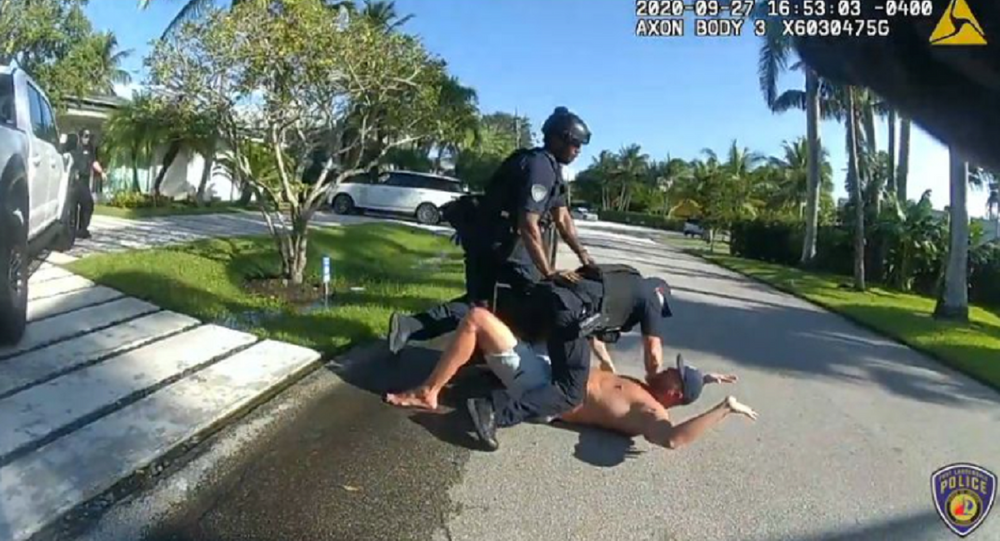 Body camera footage released Monday by Florida’s Fort Lauderdale Police Department (FLPD) shows Brad Parscale, former campaign manager for US President Donald Trump, being brutally knocked to the ground outside his home after his wife called for help on Sunday.

In the footage, Parscale’s wife, Candice, can be seen describing to police how she was worried her husband might hurt himself.

“I was standing in the backyard,” Candice is heard telling an emergency dispatcher in the video. “He’s under a lot of stress right now. He’s just pissed at the world, so he like walked out, cocked the handgun and was just ranting and raving about something. I don’t know what.”

“I saw him look out the window. Then I heard a loud ‘boom,’” she tells officers.

According to the police, Candice also told officers that her husband suffered from post-traumatic stress disorder, had become violent in recent weeks and had also talked about shooting himself. In addition, Candice had bruises on her arms from an argument between her and her husband two days before the incident caught on camera occurred, police said.

The body camera footage shows an emergency dispatcher trying to convince Parscale to come out of the house over the phone. Officers also revealed that Parscale’s speech on the phone appeared to be slurred, as though he was under the influence of alcohol, and that he seemed to be crying.

When initial attempts to coax Parscale from his home didn’t work, Christopher Wilson, a member of the police department who is friends with Parscale, was called to the residence, the Wall Street Journal reported. Wilson’s efforts ultimately saw the former Trump campaign manager come outside to talk with law enforcement officials.

“Listen, I’m not trying to kill myself. She’s lying,” Parscale can be heard telling an officer in his driveway after being coaxed outside his home by Wilson. However, seconds later, he’s seen being tackled by officers and then handcuffed while face-down.

“When officers arrived on scene, they made contact with the reportee (wife of armed subject) who advised her husband was armed, had access to multiple firearms inside the residence and was threatening to harm himself,” the FLPD said in a statement obtained by the New York Times.

“Officers determined the only occupant inside the home was the adult male. Officers made contact with the male, developed a rapport, and safely negotiated for him to exit the home,” the statement added.

Police officers removed two shotguns, two rifles, a .22-caliber revolver and five handguns from Parscale’s home, the Miami Herald reported. Police have yet to charge Parscale with any crimes.

According to the Herald, Parscale is currently hospitalized at the Broward Health Medical Center in Fort Lauderdale under the Baker Act, which permits the involuntary institutionalization of an individual believed to be impaired because of mental illness.

Parscale was replaced as Trump campaign manager in July by Bill Stepien following complaints by the president over how campaign money had been allocated.

“Brad Parscale, who has been with me for a very long time and has led our tremendous data and digital strategies, will remain in that role, while being a Senior Advisor to the campaign,” Trump wrote in the announcement at the time, TechCrunch reported.

In a recent statement to the Times, Tim Murtaugh, a spokesperson for the Trump campaign wished Parscale well. “Brad Parscale is a member of our family and we all love him. We are ready to support him and his family in any way possible,” he said.