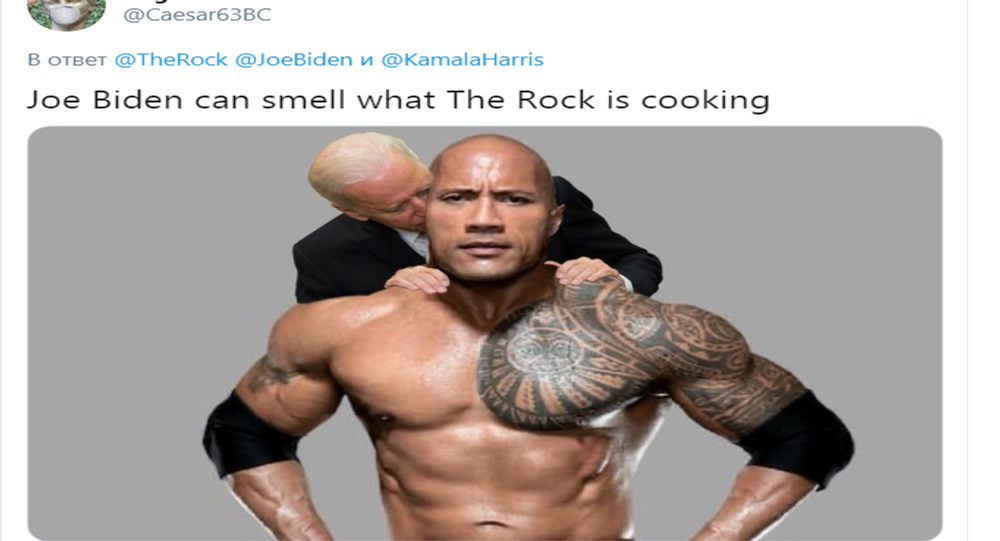 The retired professional wrestler-turned Hollywood superstar has repeatedly flirted with the idea entering politics himself, and has weighed in on political issues from time to time, but has never formally endorsed a candidate before.

“Look, I’ve got friends in all parties, but the one thing we can always agree on is the conversation and the dialogue, and where that conversation lands, is always the most critical part,” Johnson says in a video posted to Twitter.

As a political independent & centrist, I’ve voted for both parties in the past. In this critical presidential election, I’m endorsing @JoeBiden & @KamalaHarris.

The video features Johnson speaking with Biden and Harris, during which the actor concludes that Biden and Harris are “the best choice to lead our country” based on their supposed core values of “humanity,” “respect,” and “decency.”

The Rock’s announcement instantly divided his fans into several camps, with some asking why he didn’t run himself, and others expressing disappointment or accusing him of “selling out.”

Why didn’t you run?

Voting for Biden. Seriously? Those steroids are starting to wreck your brain, bro.

Sorry man, love watching Jumanji with my kids but....

After all these decades, NOW Joe is finally gonna fix some problems? No. pic.twitter.com/hlhhFZg0mT

Thank you. I will add your name to my list of ppl never to support again. Appreciate you posting this.

Joe Biden can smell what The Rock is cooking pic.twitter.com/AiVqhedtoV

Others suggested that “nobody cares” about celebrity endorsements, and asked stars like Johnson to “stay out of politics.”

Well damn. The Rock endorsed Biden/Harris so now I have to vote for them instead of Trump

I think celebrities should stay out of politics.

Biden supporters similarly came out in force, quivering in anticipation at the thought of Johnson and the president getting into a Twitter fight, and welcoming The Rock to “The Resistance.”

The Rock has triggered the Trumpsters and they're going all 'splodey head in his mentions. 🤪 pic.twitter.com/Ix6vIU25gY

The orange moron is gonna go after The Rock, and I’m here for DJ’s response!!!

Only a few users actually took Johnson on over the sentiments he expressed in his video, including a remark about the Democratic candidates’ supposed “empathy.”

“Joe Biden voted for the Iraq War. That wasn’t kind or empathetic. I voted for Trump because he’s anti-war,” one user wrote.

Joe Biden voted for the Iraq War. That wasn’t kind or empathetic.

I voted for Trump because he’s anti-war.

“Yeah – they haven’t earned our respect,” another argued, recalling Biden and Harris’s controversial stances on gay marriage and support for a crime bill which led to the mass incarceration of large numbers of African Americans and other minorities for petty crimes.

Joe Biden: “Obama and I are against gay marriage”.

Joe Biden: “Obama and I are FOR gay marriage”.

Yeah- they haven’t earned our respect.

Johnson, star of Jumanji and The Fast and the Furious franchise, told Ellen in 2017 said that he was “seriously considering" running for president in 2020, and has previously expressed support for Democratic Senator Elizabeth Warren during her run for president. He said he didn’t vote for either Trump or Hillary Clinton in 2016, feeling that neither candidate was good enough.

US University Says Biden Didn't Attend, Despite Him Claiming He 'Started Out' There - Media