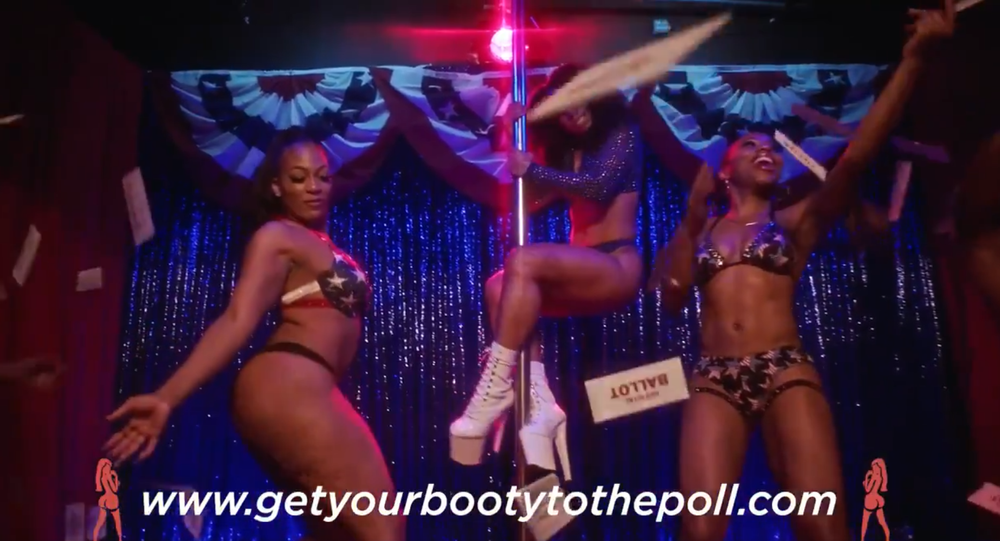 A select group of exotic dancers and a crowdfunded campaign to get out the vote called “Get Your Booty to the Poll” have not only piqued the interest of potential voters, but also triggered online debates regarding the Black vote and active racism in American politics.

The dancers, according to the campaign’s website, are named Coy, Bunni, Imani, Jordan, Jenny, Nikki and Zippora. The minute-long video shows the women trading off between performance and speaking roles as they entertain the viewer and educate them on why they should vote in the upcoming election.

Lisa France, senior writer for CNN’s entertainment team, applauded the campaign on Wednesday, tweeting, “Atlanta strippers have pulled off the best voting ad campaign I have seen yet.”

“Matter of Fact” host Soledad O’Brien, along with a slew of other netizens, also noted the effectiveness of the campaign.

This has made my entire day! Because you can’t make it rain if you locked up on some bullshit! #GetYourBootyToThePolls

I never wanted to vote so bad in my LIFE pic.twitter.com/c6mjxHxVIN

However, a number of Black individuals expressed disappointment with the video, such as Tariq Nasheed, who claimed that the video was a product of “white Democrats.” His mention of the Democratic Party made others express their own frustrations with the current two-party system and how it chooses to reach out to the Black community.

What happens after “you get your booty to the polls.” pic.twitter.com/dbk6Nn5yLS

However, Angela Barnes, the writer and director of the campaign video, set the record straight via Twitter.

“I am the writer/director & I am a BLACK WOMAN. I was NOT paid for this & used MY OWN MONEY & money raised from a GoFundMe to pay for it,” she said on social media. “Black people, especially Black men are ignored by our govt & I want them to know they need to start paying attention.”

I am the writer/director & I am a BLACK WOMAN. I was NOT paid for this & used MY OWN MONEY & money raised from a GoFundMe to pay for it. Black people, especially Black men are ignored by our govt & I want them to know they need to start paying attention. #getyourbootytothepoll

The GoFundMe campaign that financed the video, entitled “Angela and Paul want Black people to vote,” was created on July 13 by Angela Gomes and Paul Fox. “Angela Barnes” and “Angela Gomes” are the same individual.

The voter turnout campaign also cleared up some misinformation about Democrats’ affiliation with “Get Your Booty to the Poll.”

Gomes also clarified that Paul Fox is Black, not white, as one netizen alleged.