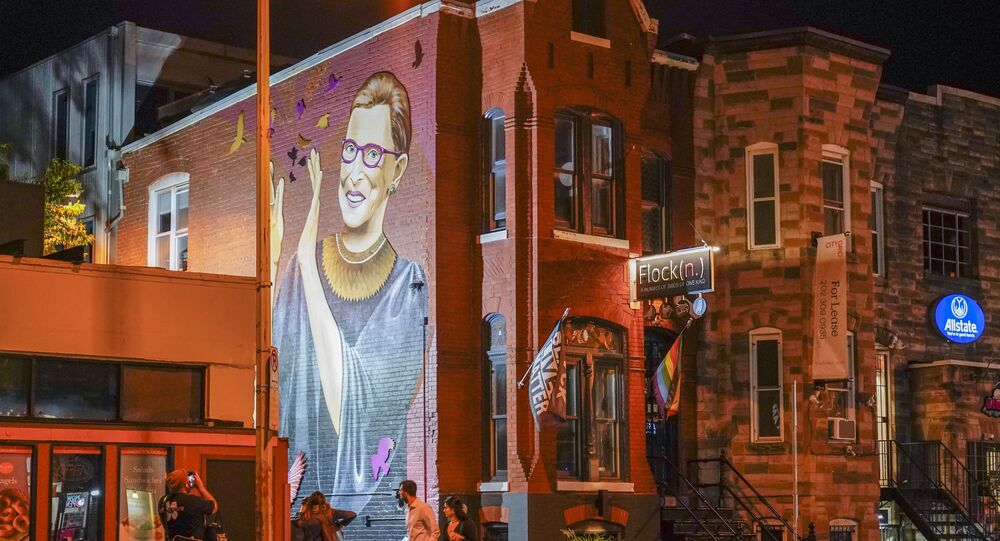 The first Jewish woman on the US Supreme Court, Ruth Bader Ginsburg, died on Friday at the age of 87 from complications related to pancreatic cancer. As her lifelong battle for equality comes to an end, Americans from every walk of life have come together, online and in person, to share their memories about the legendary justice.

As people gathered in front of the US Supreme Court on Friday night to mourn the death of Associate Justice Ruth Bader Ginsburg, some decided to stick to social distancing and pay their tribute online, by sharing quotes of the legendary fighter for women rights, with #RuthBaderGinsburg immediately trending on Twitter.

What a brilliant, courageous and inspiring woman she was. A determined and tireless fighter for women’s rights and equality through law. Your legacy will encourage us to keep on going!#RuthBaderGinsburg pic.twitter.com/aYfyq7BaHf

Thank you for your steps for feminism and Justice, #RuthBaderGinsburg 💜 pic.twitter.com/edHlle70mE

“I don’t say women’s rights — I say the constitutional principle of the equal citizenship stature of men and women.”

Without question, Ruth Bader Ginsburg was an American hero and one brilliant badass!! Keep the #NotoriousRBG spirit alive with these 13 inspiring quotes to live by: https://t.co/BaS5EWqLMb#quotesoftheday #RuthBaderGinsburg pic.twitter.com/OD6OJEpWtN

“#RuthBaderGinsburg she was a true warrior a true champion who protected the rights of All Americans,” one user wrote.

Other users did not miss a chance to recall the fashion trends set by the jurist, who famously ditched traditional American court dress and neckwear in favour of the French-style of court dress decorated with various necklaces. As a fierce cancer fighter, she also became an inspiration to many with her exercise routine, after being occasionally spotted at the Supreme Court gym.

These looks are for you Ruth. You will forever be our champion. Swipe for an icon and do not forget to VOTEEEE! #RBG #RuthBaderGinsburg pic.twitter.com/FwuG1pxfM7

When I’m sometimes asked
[when will there be enough women on the Supreme Court?] and I say “When there are nine,” people are shocked.
But there’d been nine men, and nobody’s ever raised a question about that.

#RuthBaderGinsburg she was a true warrior, a true champion who protected the rights of All Americans #RBGRIP pic.twitter.com/3CvxGuO4sb

“Fight for the things you care about, but do it in a way that will lead others to join you.”#RuthBaderGinsburg was a fierce advocate for women's rights & always ready to voice her dissent so justice prevailed.

She has paved the way for SO many women globally #RIPRBG pic.twitter.com/Zc3xJmohnI

Some Americans, however, remained more concerned about the vacancy she has left at the US Supreme Court, speculating more on when her replacement will be nominated than on who it might be. Ginsburg, a strong critic of US President Donald Trump, had dictated a statement to her granddaughter just before her death, expressing her “most fervent wish” not to be replaced “until a new president is installed”.

In DC tonight. Remembering #RuthBaderGinsburg. And worrying about the future of our country. We must turn this into intense activism to press Senators to block a Trump replacement & then to defeat Trump soundly in November. This would be the greatest tribute to #RBG pic.twitter.com/VGmZl4C8tx

It’s unclear so far whether her plea will be answered. However, the video of Donald Trump’s reaction to the news about her death is also currently making rounds on social media, with many calling it “an amazing moment” from the US President, who called his fierce opponent Ginsburg “an amazing woman”.

“This is the @realDonaldTrump no one ever sees,” one person shared.

This is the @realDonaldTrump no one ever sees. This is a historic moment caught on tape. Trump on the tarmac hearing for the first time about the passing of #RuthBaderGinsburg . Beautiful moment. https://t.co/6OkP468JJD