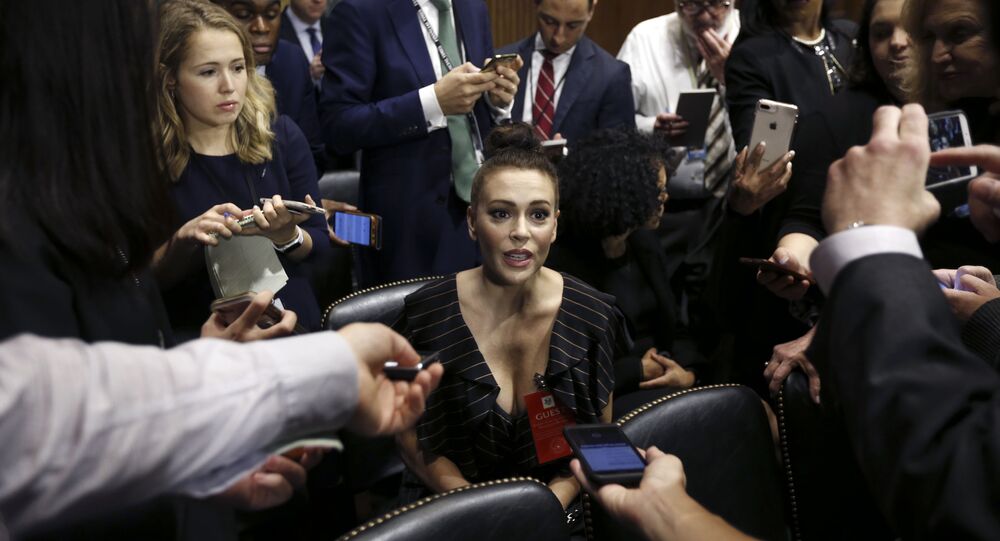 The excerpts from Bob Woodward's upcoming book on US President caused some uproar this week after they revealed that the POTUS previously admitted to the veteran Washington Post reporter that he had tried to publicly downplay the COVID-19 threat in the past.

Alyssa Milano said on Thursday that the “entire GOP should be tried for treason” in relation to Donald Trump’s revelations that he had minimized the risks of the coronavirus pandemic and potentially misled the public on the subject in a bid to avoid panic. The disclosure was apparently made during one of his interviews with the Washington Posts's Bob Woodward in preparation for the reporter's ‘Rage’ book, which will see the light of day next week. Trump then reiterated the claim during a news conference on Wednesday when directly asked by one of the reporters.

The entire @GOP should be tried for treason. #TrumpKnewVoteBlue

The news was met with condemnation from Democratic politicians, with Trump’s presidential rival Joe Biden alleging that POTUS’ actions have cost the lives of more than 50,000 American citizens. Milano however believes that the whole Republican Party should bear the costs of Trump’s alleged inaction in relation to the COVID-19 crisis, accompanying her tweets with the #TrumpKnewVoteBlue hashtag.

However, those disagreeing with Milano’s opinion were not able to enter into a debate with her – as the actress limited the reply option to her post only to those who she follows herself.

"Apparently Alyssa is unable to handle the heat and won’t allow any replies. Let’s make the RT the new ratio”, one user wrote in the retweet-with-comment section.

😂 Oh goodness, she blocked people from replying to her. Talk about a control freak. I’m going to make a stupid statement and no one will be able to disagree. Probably a smart move. 🤣 https://t.co/yWVK2HI0d3

“Do you know what treason is by definition?”, other people wondered.

“Thinking the same thing about the Democratic Socialist Party”, was one of the comments to her post.

“That's not how democracy works. The actions of one isn't the acceptance of many. This isn't like your side of politics that put everyone in a collectivist mentality where anyone not in the same think tank is excommunicated”, another person suggested.

On Wednesday, the Trump Task Force’s leading expert on coronavirus and one of the country’s most respected immunologists, Anthony Fauci told Fox News that the US president had never grossly distorted information on the COVID-19 pandemic. Back in March, Fauci, who is also a director of the National Institute of Allergy and Infectious Diseases, praised the Trump administration for its handling of the health crisis, telling Fox News that he could not “imagine that under any circumstances that anybody could be doing more”.