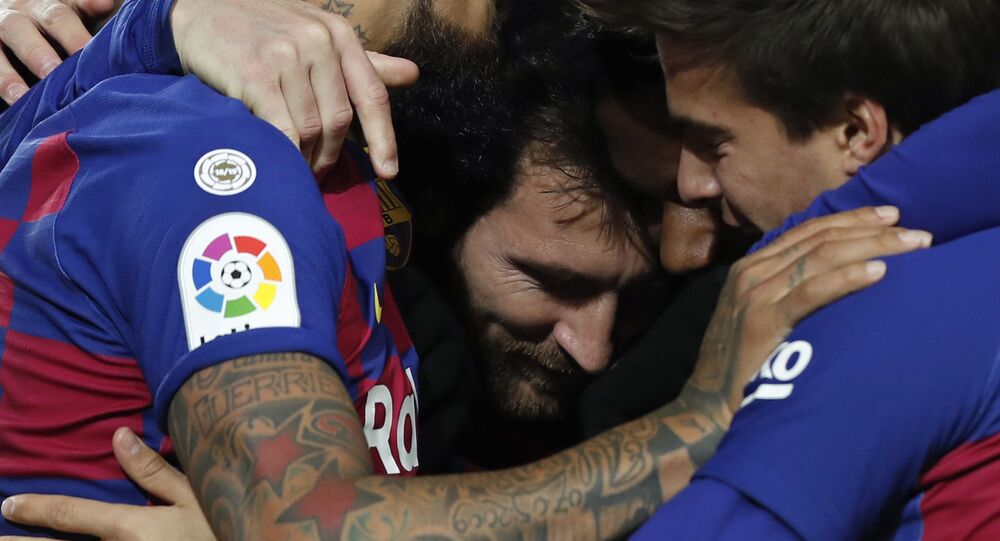 'They Made Him Stay': Netizens Upset as Messi Says He Won’t Leave Barcelona

The football world came to a standstill on 25 August after Lionel Messi, considered one of the best players in the history of the sport, announced that he wanted to exercise a clause in his contract and leave Barcelona.

Lionel Messi never ceases to surprise footballs fans, this time though he didn't do it on the football pitch. The 33-year-old revealed he would stay at Barcelona because of the $823 million buyout clause in his contract.

The athlete said there was another way to leave Barcelona – by taking the Catalan club to court, something Messi said he did not want.

His statements drew a mixed response from social media users, while Barcelona’s fans were over the moon that the athlete will stay at Camp Nou.

For a moment I nearly had a heart attack💃🏽💃🏽 pic.twitter.com/2LF3X3b5sN

​Others were upset and claimed Barcelona’s officials forced him to stay.

He's heart is no longer with Barca he's stay bcz They made him stay !!! pic.twitter.com/K8Ub98BZtP

Disgrace of a club treating their legend like this.

​Many netizens believed the athlete never wanted to leave the club and requested a transfer because he wanted a pay rise.

He was never going to leave. He does this after every loss. Retires from.Argentina when they lose and "leaves" Barcelona when he should take the blame it's the board and his teammates but not him.

​Others said the athlete is afraid of change and claimed that the desire to leave Barca was a ruse aimed at deflecting attention from a disastrous 8-2 loss in the Champions League against Bayern Munich.

he is very good and that's it, that's why he is afraid to change clubs, if he went to Man City people would see his true worth as a player, he will die in Barça because Spain is an easy league and he has 1th or 2th spot assured.

All this transfer saga just to make us forget about the biggest CL humiliation in history 😭😭😭pic.twitter.com/h5Du9qVO6A

​Still others joked about Messi’s transfer negotiations with Manchester City and how Barcelona persuaded the athlete to stay.

This is how bartomeu managed to keep him pic.twitter.com/1S2fgGKIys

​On 25 August, Messi filed a transfer request to Barcelona saying he intends to leave the club as a free agent, citing a clause in his contract which allows him to do so. Right after the news broke out, reports emerged saying the athlete, widely considered one of the best players in the history of football, may end up in Manchester City or Paris Saint-Germain.

However, Barcelona’s officials insisted the athlete can’t leave the club because he filed the transfer request past the deadline mentioned in the contract – 10 June (when the European football season usually ends). Messi maintained that due to the coronavirus pandemic, the season was prolonged and lasted until the end of August.