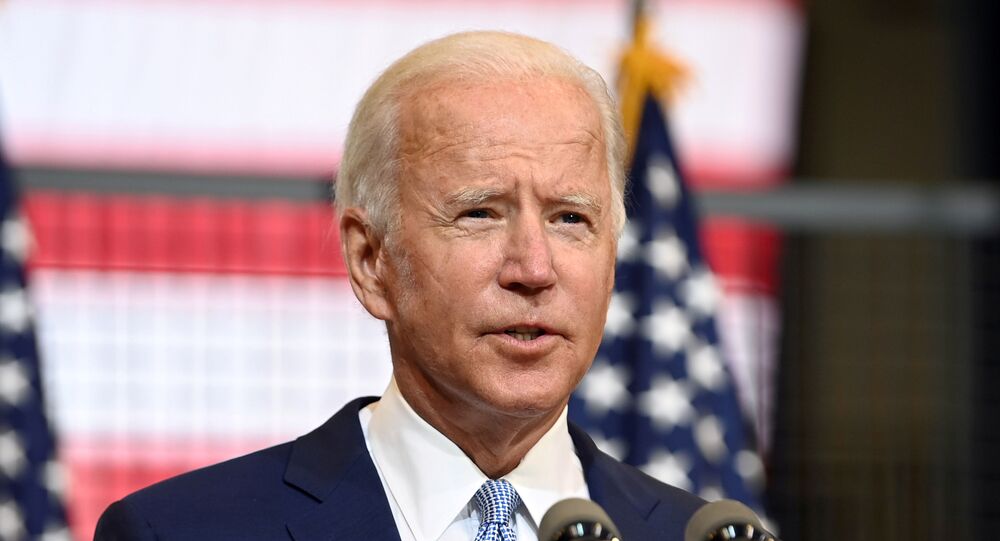 While some netizens mocked Biden's address, others speculated about who might end up being in charge if the Democratic candidate gets elected as President of the United States.

US Democratic presidential candidate Joe Biden has been thrust into the spotlight online due to a particular incident that occurred as he was delivering a speech during a campaign stop at Pittsburgh, Pennsylvania.

During his address, Biden appeared to fumble his words as he was describing the toll the ongoing coronavirus pandemic has taken on the United States.

"COVID has taken this year, just since the outbreak, has taken more than 100 years… Look. Here’s… The lives… It’s just… I mean, think about it", he said. "More lives this year than any year in the past 100 years".

This apparent blunder did not escape the watchful eye of Eric Trump, son of the current US President Donald Trump, who tweeted the video featuring the episode in question with a snarky caption.

This is why the Biden campaign doesn’t want him to leave his basement — this guy isn’t playing with a full deck and it is so irresponsible that the media covers this up... pic.twitter.com/HJ2dJI3jpx

​"This is why the Biden campaign doesn’t want him to leave his basement — this guy isn’t playing with a full deck and it is so irresponsible that the media covers this up", the president's son quipped.

Quite a few social media users proceeded to mock the Democratic candidate following this development.

This guy had months to get ready to emerge from the basement. His team prepped him, he got on a plane, flew to PA, only had to talk for 12 minutes, took no questions, and still screwed it up.

He wasn’t even under pressure. There wasn’t anyone there . No crowd. Only a select few of socially distanced reporters who asked no questions. Here he is standing in front of that cage & flag doing the speech. pic.twitter.com/OlQcCccHV7

​Some even made suggestions about who might end up running the country if Biden wins.

We know of Biden wins he won’t be running this country!

More proof that Kamala is the real candidate for president.

More proof that Kamala is the real candidate for president.

Yet there were also those who seemed more eager to bash Eric and his presidential father instead.

Dude when is your next book coming out? Last book was awesome! pic.twitter.com/v2BmGUbx8Y

Last month, Joe Biden was officially nominated by the Democratic Party as candidate for the upcoming presidential election in the United States, with Senator Kamala Harris his running mate.

His electoral rival and current POTUS Donald Trump repeatedly brands Biden "Sleepy Joe" and declared during a campaign rally that he doesn't want to lose the election to a "low-IQ individual".