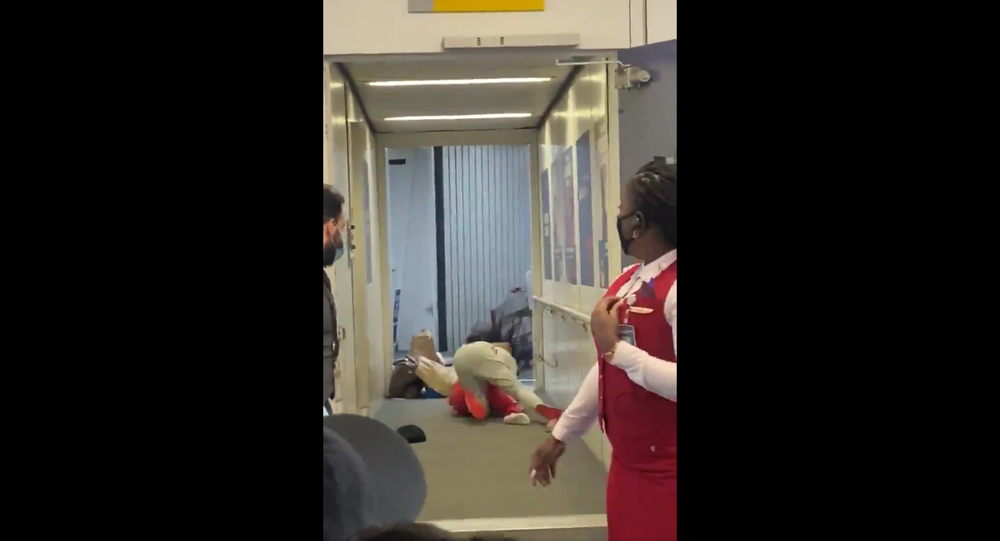 Delta Air Lines Flight 1600 to Atlanta, Georgia, was delayed over the weekend after two passengers began to dish out several punches to one another while on the jet bridge of a terminal at New York City’s LaGuardia Airport.

Cellphone footage of the brawl was captured by fellow traveler Destiny Davis, who told video licensor Storyful that she believed the two women were “either cousins or sisters.”

Davis’ recording of the initial brawl begins with a flight attendant walking away from the jet bridge and requesting for security officials to be directed to the terminal. As shocked individuals are seen standing off to the side, one traveler can be heard off-camera saying, “Come get Aaliyah, she’s fighting.”

Within seconds of the unseen traveler’s remarks, another woman comes onto the scene, immediately calling out to the individual identified as Aaliyah.

Although the first of Davis’ three videos of the incident cuts off with the woman walking toward the two duelers, the second recording shows the pair being pulled apart but continuing to trade fighting words.

“I told you to stop f**king playing with me,” one of the brawlers says, before the other interjects, “B***h, you got your a** whooped.”

With somewhat cooler heads, the two eventually put some distance between each other, with one walking away toward the seating area at the terminal and the other walking back onto the jet bridge to presumably retrieve her belongings.

As for the third and final recording captured by Davis, it shows the two women reengaging in a heated exchange of words while two adult figures who previously tried to separate the fighters attempt to maintain the distance between them.

Davis told Storyful that for the majority of the altercation, “there was little intervention” before law enforcement officials arrived on the scene and ultimately “led them out in a peaceful manner.”

In total, the plane was delayed by 30 to 40 minutes, according to Davis, who noted that Delta passengers had to wait for the luggage of the two individuals to be retrieved before the plane was cleared for takeoff.

It remains unclear what exactly prompted the wrestling match and whether any charges were filed in the matter.