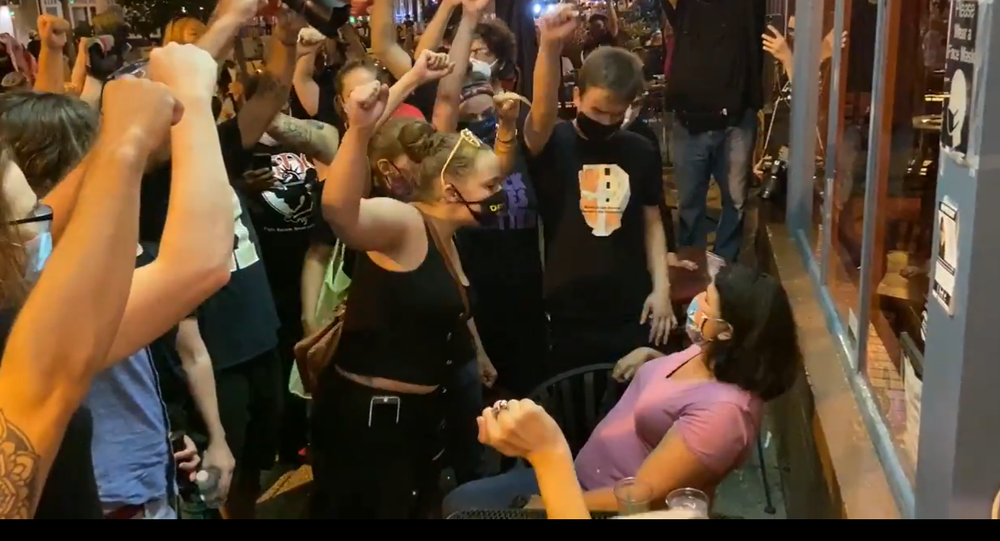 Gay social media activist Brandon Straka and his two colleagues were just the latest victims of harassment by protesters outside the Republican National Convention in Washington DC, where an elderly couple were assaulted and a podcaster and his wife were followed for a mile.

A gay social media activist has told of a homophobic assault he and two colleagues suffered from protesters outside the Republican National Convention.

Brandon Straka posted a video on Twitter on Friday showing he and Mike Harlow being being spat at in the street in the street and called "faggots" after the final night of the convention in Washington DC on Thursday.

"I can’t even describe the sinking feeling I got last night being attacked for being gay & just having to take it," Straka wrote on Twitter. "If we defended ourselves the media would label us racist attackers. At least back in the day when gay bashing was common the media didn’t blame the gay ppl."

​The video ends with woman wearing a Black Live Matter (BLM) t-shirt returning to knock the recording device out of one of the victims' hand.

© Photo : Twitter / @KunkleFredrick
Video: DC's Mayor Bowser Condemns 'Bullying' of Diners by BLM Protestors
In an interview with Fox News, Straka gave more details of the incident. "We were exiting the convention, along with a large group of people, and there was a small group of BLM hecklers there to harass people as they were walking out," he said.

"The majority of the people exiting went to the right, the two friends of mine and I exited and we went to the left, which ended up being a big mistake," as they ran into a group of four protesters on the way back to their hotel.

"And that’s when they started hurling homophobic slurs at us, anti-gay slurs, and then they walked up to Mikey Harlow, spit in his face. They threw a drink at me, threw a cup in my face, and then they acutally hit Libby Albert, the girl that was with me.

"They called us the anti-gay f-word about three or four times, as you can see in that video."

Straka, who founded the #WalkAway social media campaign encouraging left-wingers to distance themselves from controversial Democrtatic policies, was not the only victim of angry demonstrators outside the RNC.

Another Twitter video shows and elderly man and woman harassed outside the venue. One protester shoves a loudhailer in the white-haired man's face and shouts "get the f*** out" just before a woman barges him in the back.

And former Secret Service agent turned podcaster Dan Bongino said on Friday that "BLM terrorists" waiting outside the convention stalked him and his wife Paula for a mile, hurling threats and abuse.

And earlier this week Kentucky Senator Rand Paul thanked Washington DC police for saving him from a "crazed mob" who surrounded him as he entered the convention.