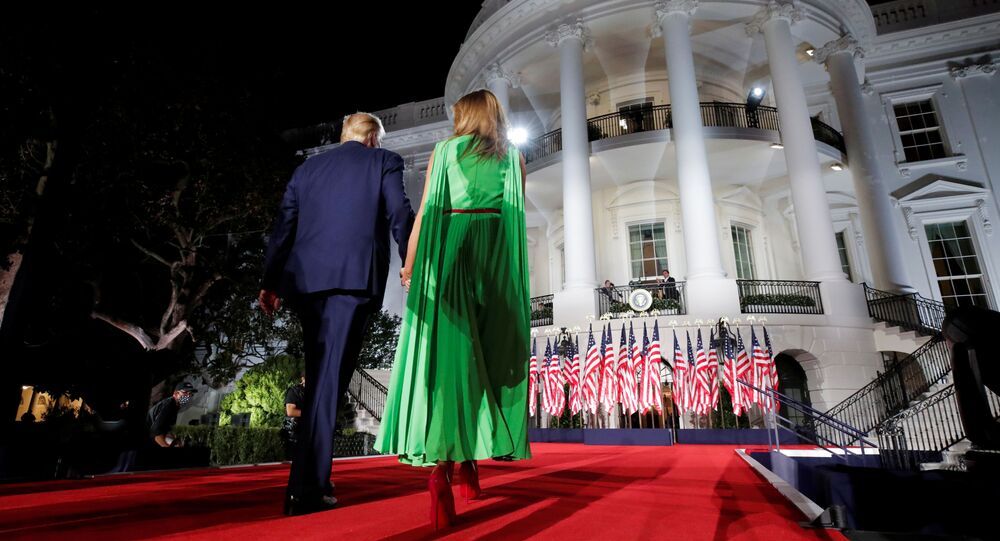 The first lady's pick of wardrobe is rarely ignored by eagle-eyed netizens, and even more so if it truly stands out not only for its design, but for its colour.

Melania Trump turned heads Thursday as she donned a flowing bright green gown on the final night of the Republican National Convention, during which her husband solemnly took to the podium, with his better half by his side, to accept the GOP nomination for re-election.

Despite green being a vibrant colour in itself, standing for life and continuity, the hue of the first lady's dress, as others obviously preferred more subdued colours, appears to be reminiscent of a screen that an editor can replace with any backdrop of their choice to make it more compelling or outstanding.

Here is where the imagination of netizens proved to be utterly unmatched.

It wasn't long before Melania's outfit was edited to look like whatever you could think of: from a projection of former Vice President Joe Biden right across Melania's body to his face, or a home for dancing viruses, in a reference to castigators of the Donald Trump team's response to the pandemic.

@MSNBC_Breaking none of you are talking about Melania’s dress. LOOK @ Twitter, the green screen is lighting up. Did she do it on purpose? pic.twitter.com/51CpIU5Ycl

They had the Social Media director talk tonight... yet he let Melania wear this dress? He's bad at his job. pic.twitter.com/odkeKa34TL

One revisited the green dress turning it into a sign plastered with the number of COVID-19 deaths across the country, while another, Pia Guerra, superimposed a picture of former President Barack Obama's birth certificate on the floor skimming dress. Courtesy of a third, FLOTUS rocked a weather forecast picture instead of a gown, or rather as one.

There was also room for rather contentious content, as "The Daily Show" put a video of Trump and Jeffrey Epstein on the garment.

Many queried if Melania and her aides had anticipated that the dress would be mocked, much like Queen Elizabeth's bright green outfit was earlier.

If Melania knew how many people are going to take advantage of that green screen colored dress, she would have worn something else. pic.twitter.com/GrsEnPQvXy

Others wondered if it is just a dress, much like Melania's jacket that said "I REALLY DON'T CARE" was just "a jacket", as Stephanie Grisham, now the first lady's chief of staff, said about the Zara coat the first lady wore in June 2018.

#MelaniaSpeech #RNC2020
Melania Trump's dress tonight reminds me of that time when she wore... pic.twitter.com/mgVUULF8Mp

"I hope the media isn't going to choose to focus on her wardrobe", Grisham added.