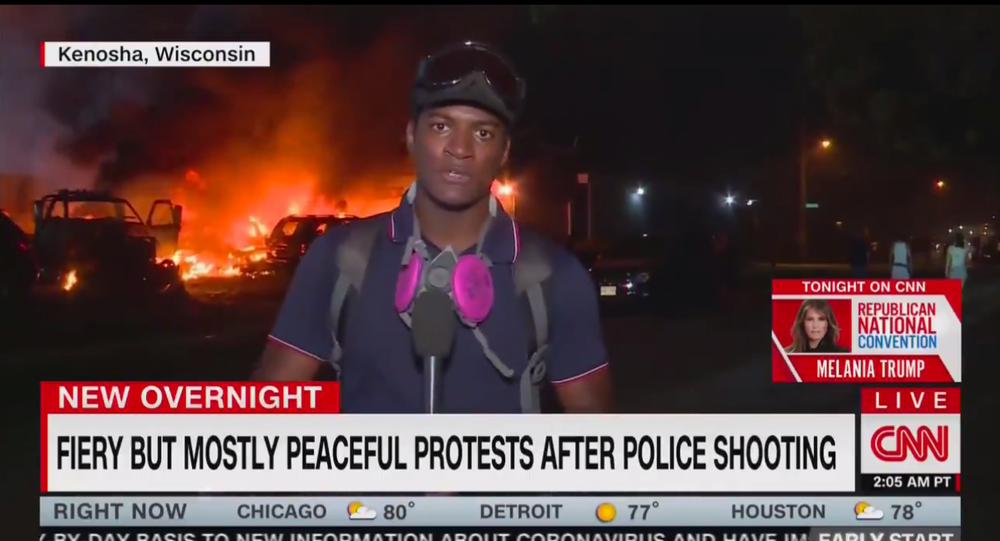 Protests in Wisconsin's city of Kenosha, sparked by a video of a white police officer shooting a black man, Jacob Blake, saw violence, looting, arson, as well as two murders and one injured. To help curb unrest, the White House helped the state to deploy some 1,000 National Guard troops and 200 federal agents.

Covering protests that rocked the city of Kenosha in Wisconsin, CNN rolled out a chyron saying "“FIERY BUT MOSTLY PEACEFUL PROTESTS AFTER POLICE SHOOTING”. The reporter who went live from Kenosha said that the protests were "largely peaceful" but became violent at night, while standing in front of one of the burning locations in the city.

The reporting caused intense backlash, particularly from US President Donald Trump's son Eric, who labeled CNN a "national embarassment" in a tweet commenting the chyron. He was not alone in the outrage over the headline, as netizens slammed CNN as a "parody news service" advising the agency to look up the definition of "peace".

CNN ran the chyron tonight: "FIERY BUT MOSTLY PEACEFUL PROTESTS AFTER POLICE SHOOTING" while a fire raged in the background. pic.twitter.com/nEIKhTrepE

​​Eric Trump tweeted about the chyron, calling the situation "unbelievable" and receiving thousands of various comments, some supportive, and some attacking him and the Trump family.

The look on his face says even he doesn’t believe it.

They were "mostly peaceful", except those times when people were maiming other people.

Guess those are hot dogs on a grill Sunday bbq in the back ground huh?

Mostly peaceful. Not too many things destroyed. Just a few fires. They're probably roasting marshmallows.

This is Trumps country - it is on him

​​Some users described the protest-dispersal tactics in a similar way to that of CNN's.

If these riots are "mostly peaceful", then pepper spray is "mostly spices".

​Others projected the CNN coverage style on other events, even going for ones from the fantasy world.

​Protests in Kenosha began after a video emerged showing a police officer, Rusten Sheskey, shooting Jacob Blake, who was charged with rape and domestic abuse. Blake survived, but remains in serious condition and is paralyzed from the waist down, according to his family.

The protests have been ongoing since 24 August, with some rioters torching vehicles, setting buildings on fire, smashing windows and clashing with police. On late Tuesday, a violent demonstration turned deadly, when a teenage suspect allegedly killed two people and injured one. He was arrested in Illinois later and charged with first-degree murder.