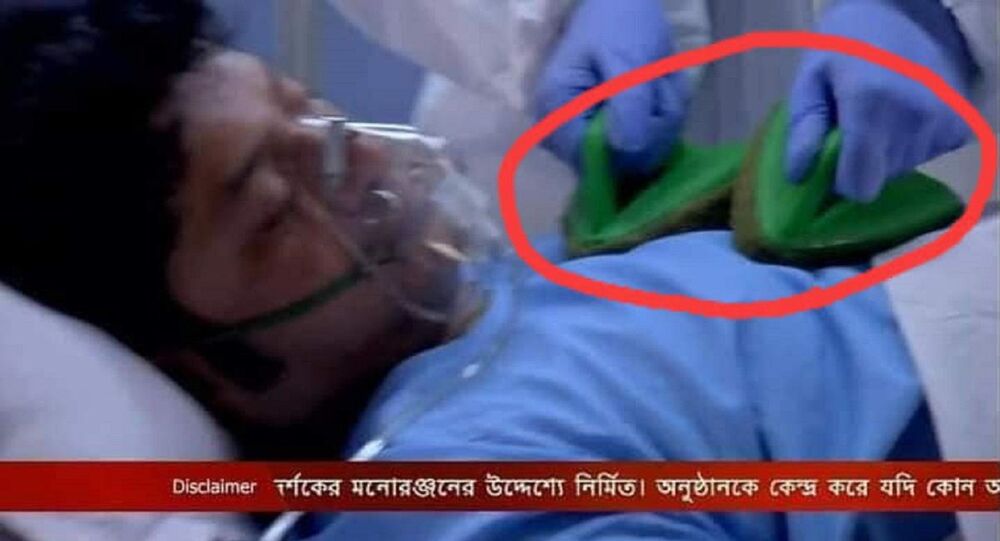 New Delhi (Sputnik): Indian television soaps are hard to imagine without melodramatic scenes, elaborate makeup for their characters, and extravaganza in many forms. The series also have a reputation of defying the laws of physics and even medical science.

An Indian television series has been spotted by the audience using a bizarre prop, apparently a bathroom scrubber, to resuscitate a patient in hospital.

The Bengali-language show on the television channel Zee TV featured a doctor geared in personal protective equipment placing the scrubbers on the patient’s chest to give him chest compressions while trying to revive him. However, eagle-eyed netizens were bright enough to spot the “Scotch Brite Bathroom Scrubber”.

Screenshots and snippets of the serial have gone viral on social media, triggering a laugh riot on Twitter.

I think that doctor scrubbed patient's chest hair with those to bring him back from coma. Such a genius.!

Netizens also spotted a monitor which showed the patient’s vitals as normal.

Looks like all reading are good still need scotch brite 🤣

Who’s the director?? Hope he’s not the one belongs to Shaka 😂 pic.twitter.com/82BLLzgZUW

Look at the monitor, heart rate is 71 beats per minute, spo2 93% and respiratory rate 29 per minute. Doesnt even need CPR in the first place 🤦

The serial is known as "Krishnakoli" and the doctors are shown frantically trying to revive the patient by saying: “I cannot say anything about him, we’re trying our level best”.

Earlier, people ridiculed a Hindi soap for kissing scenes as the characters were wearing face shields and showing matching masks with sarees as a new fashion statement.