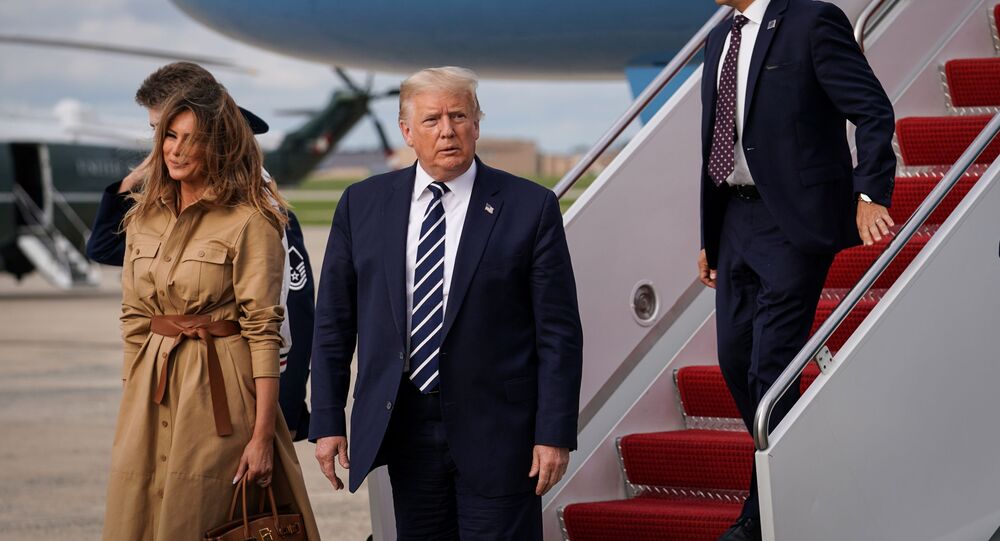 Since her move to the White House, the US First Lady’s bold looks and smiles have made her a real meme star on social media. People have also been speculating for some time about whether Melania Trump is really happy in her marriage, and despite her direct assurance that she is, some are still looking for new evidence to prove her wrong.

FLOTUS was caught on camera repeatedly rejecting Donald Trump’s hand, as the presidential couple made their way down the steps while exiting the plane at Joint Base Andrews on Sunday.

The clip, shared by the Hill and then re-posted by other social media users, shows how the president makes several attempts to reach for his wife’s hand while she refuses him and holds onto the handrails instead.

Welcome to the resistance @FLOTUS pic.twitter.com/4qJ5JaeqJO

​As this was not the first or even the second time that Melania chose not to walk with her husband hand in hand, social media users could not stop but wonder whether there is something more to this than a simple dislike of public displays of affection – or a preference for rails?

“Melania just does not like holding that guy's hand, does she?”, someone commented the video.

Oh man, she despises him so much. Once more avoiding his touch.

She can’t stand him so much, she’d rather roll down the steps in order to avoid him. And he can’t even let his kid go before him into the helicopter 🤦🏽‍♀️

I hereby petition Twitter to put the Beatles' "I Wanna Hold Your Hand" over this clip so we can all enjoy forevermore.

She thought he was going for her handbag

Others also rushed to recall other instances when Melania was not willing to get touchy with her husband or gave him a brief and rather unnatural smile.

But many also came to the first lady’s defense, noting that it was a very windy day at the base and Melania Trump was just trying to do her best to hold her balance and make sure that her jacket would not blow up.

Melania looked like she was trying to make sure she could balance down the stairs. She was on her own if she fell. She did hold his hand later and then he seemed to have pushed her in front of him to get on the plane.
No acknowledgement of Melania’s kid though. Feel bad for him.

Well let’s see. It’s super windy. She can barely see ashes coming down. Maybe her jacket will blow up? I’m no lover of her and trump, but maybe this time it is what it is? 🤗

Another video from the trip showed the two actually holding hands while leaving Morristown a couple of hours before, looking visibly happy and relaxed. The couple was also then photographed with their hands together after their arrival at the base.

Back in 2018, following a wave of speculation about the state of their marriage, Melania assured an ABC News reporter that she had tender feelings for her husband and they were “fine”. But it looks like some people are just not willing to believe this.