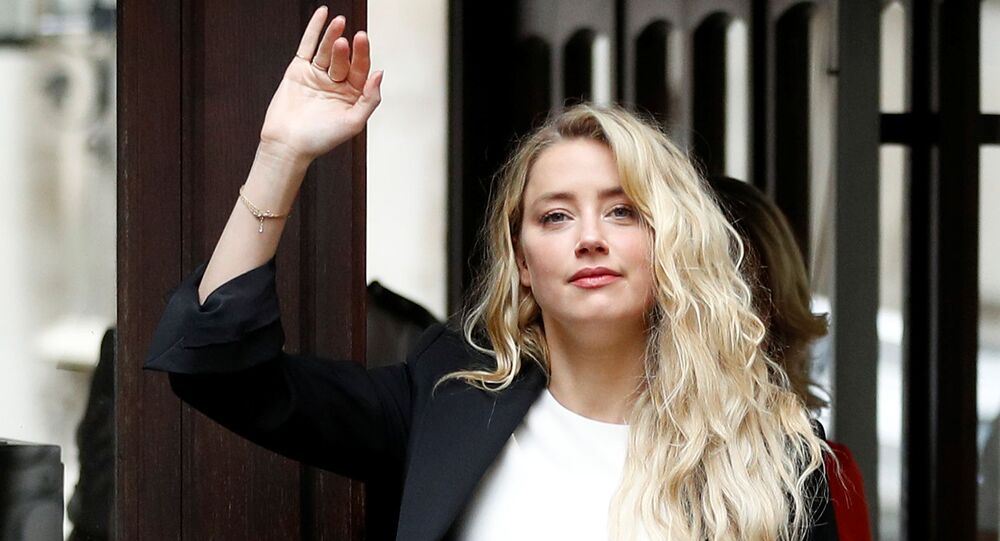 US actress and Johnny Depp's ex-wife Amber Heard has been embroiled in a legal battle with her former husband who accuses her of lying about being a victim of domestic abuse during their marriage. These allegations against the Pirates of the Caribbean star and some of Heard's past actions and words appear to have earned her a real club of haters.

Amber Heard had to defend herself on Twitter after numerous social media users accused her of being disrespectful towards Muslim culture, following the actress sharing a photo during her visit to a Turkish mosque where she appeared to be braless.

Spent the day wandering around the magic of Istanbul’s mosques and couldn’t be more in love with this gorgeous city...

The pics, which seem to have been deleted and then uploaded again to her Instagram feed and stories, showed the Rum Diary star posing in one of Istanbul’s sacred places while wearing a red head scarf above a light-coloured blouse and top that displayed her braless breasts. The photos outraged some social media users who rushed to share them on other platforms, including Twitter, while accusing the 34-year-old actress of being unaware of "the meaning of respect".

"Oh, she's so respectful right?", one user grudged. "At a religious ground showing off her breasts in a see-through blouse... she'll put a scarf over her head, but a bra? Nah...This pic sums up how fake and phoney #AmberHeard really is".

Amber Heard really did enter a Mosque in Istanbul with her nipples on show didn’t she? The disrespect!

Amber Heard doesn’t know the meaning of respect. The fact she deleted the original Istanbul Mosque photo only to post two! Ignorance really is bliss when you turn off your comment section. pic.twitter.com/3wmfN6f2aW

Amber Heard has no respect for religion or race as we’ve seen many times.

Posted while touring a Mosque. Using a Hijab as a fashion accessory. Hair & neck showing and braless.

Amber Heard was not only wandering outside the mosque in such an inappropriate and disrespectful attire but she entered the inside of the holy mosque as well with Allah and Prophet’s (pbuh) name on the wall. As a Muslim I am disgusted and hurt by this vile behavior. pic.twitter.com/C53ofcNPO0

So Amber Heard decided to post her Istanbul mosque picture again just changing the text (plus, posting it on her stories). The level of disrespect is astonishing. pic.twitter.com/dYHDXg101M

Amber Heard: “I am an atheist. I don’t believe in God. Here I’m wearing “Atheist AF” T-shirt to stress it”

Amber Heard when she’s lost her “activism” machine: “Oh, look, I am in a cemetery. I want you to think that I am religious!”

It’s a huge insult for all Muslims. It hurts. pic.twitter.com/mVrZoWo8rm

However, after one outlet reported about the resentment Heard's appearance inspired, the actress hit back at the media and haters with a ringing tweet: "Nope. Apparently whoever paid 4 this to b 'written' wasnt paid enough".

https://t.co/yCM43yPgxj
Nope. Apparently whoever paid 4 this to b “written” wasnt paid enough. Ill make it easy(ier):
Mosques are real places. So are museums & churches. So are head scarfs (where they are sometimes required n order 2 visit). Mystery solved.

But this response only agitated the public even more, with many slamming Johnny Depp's ex-wife for failing to apologise for her actions and not feeling remorse for her "disrespectful" outfit.

"Never seen her apologising to anyone, tbh. She always come up with an excuse, and it's not an appropriate and polite accuse, it’s always 'i'm-better-than-you-so-don’t-ever-criticise-me’ excuse", one person wrote.

Deflecting much again? Nobody said museums, churches, mosques and head scarves are not real. They questioned your choice of outfit. Bras are real too. So is your lack of respect but let’s not ask too much from you, shall we?

Heard's trip to Istanbul follows her appearance at London's Royal Courts of Justice, where her ex-spouse is suing The Sun's publisher, News Group Newspapers (NGN) for calling him a "wife beater" in a 2018 article, while citing "overwhelming evidence" that he abused the actress during their brief marriage. Depp is set to win £350,000 in damages by proving that he has never assaulted the starlet and was rather the victim in their relationship.

Over the three weeks of testimony by Heard, Depp, their current and former staffers and aides, the court has heard some shocking details about the couple's marriage, with the judgment expected to be delivered no earlier than late September. However, this libel trial is believed by some to be just a "dress rehearsal" before the real battle next January in the US. In their home country, Depp is suing Heard for a 2018 article for The Washington Post, where she described herself as being a victim of domestic abuse, although without naming the actor directly. The famous Captain Jack Sparrow still took these claims personally and now hopes to make Heard pay $50 million for her "false" allegations.