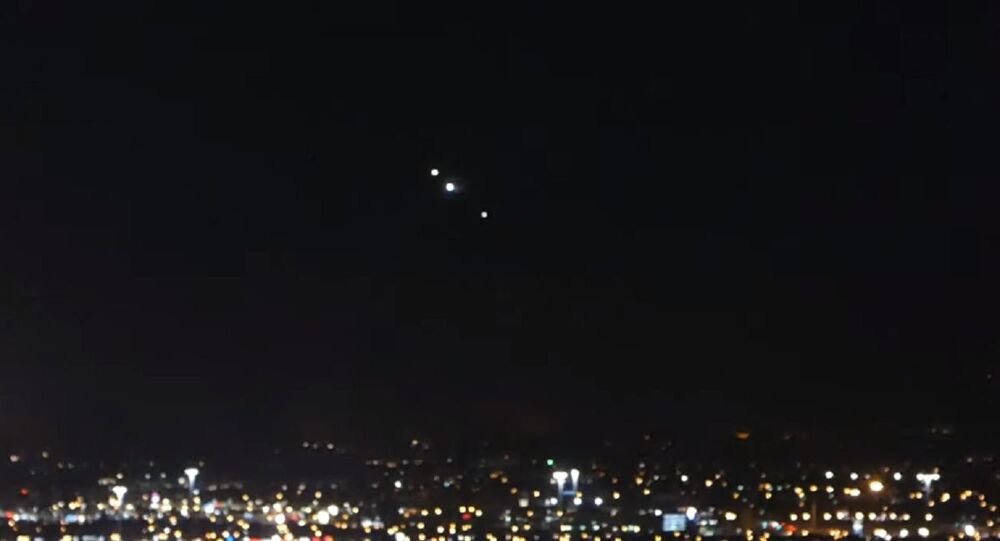 Some cryptic red-light formations, previously spotted across the Virginia and Nevada skies, have already taken away the breath of more than a hundred thousand viewers, as a footage of the unexplained phenomenon was shared on the net. Now something similarly mysterious observed in the same area has again raised questions among the online crowd.

A video of the Las Vegas night sky showing three moving and flashing orbs has prompted vivid speculations about possible UFO encounters. The clip in question was published on YouTube by WP Oreo, a channel, which has less than a dozen subscribers, but the footage has already been watched more than eight thousand times, with observers trying to guess the nature of the mysterious lighting.

The video starts by showing a huge white orb stirring across the city’s night sky, until it actually breaks into two, with the second shape moving in a reddish light, while blinking and disappearing from sight for some time. Then another orb joins the pair, with three objects forming a cryptic triangular pattern, moving across the sky and occasionally flashing.

The uploader did not provide a description to the video, nor did he or she specify the exact location and timing of the phenomenon. However, the person later wrote underneath the video that it was shot “outside on the balcony”. The person behind the camera also specified that helicopter sounds heard in the clip were actually coming from choppers flying around him.

“The light was far from me, couldn’t hear it even if I wanted to”, the uploader explained, nothing that local McCarren airport was also more to the “north” from his location.

This prompted netizens to come up with various theories about what the video has actually captured, with some insisting that it could have been nothing more than occasional flybys from UAVs.

“Am I the only one here who has heard of drones? Jeez, people.. I hate to be the bubble-poppin' dream-crushing debunker, but c'mon people,” one YouTuber noted.

But not everyone was ready to believe him.

“Okay i am ready to be probed,” someone joked, hinting at a possible encounter with a UFO.

“Fake alien invasion? Like predicted by a former government officer,” another added.

Many still praised the video’s uploader for the “amazing catch”:

© CC0
'Without a Doubt, an Alien Craft': UFO Gets Spotted by Security Cam, Conspiracy Theorist Claims
“I've seen these kind of lights with the same behaviour in several other videos, but none has come this close and also captured when they split/materialise”, one person wrote.

According to the channel’s author, he, however, also remained at a loss when it came to an explanation about what he'd actually seen.

“You guys know as much as i do at this point,” the person wrote.

Just in April, some similarly-shaped, but red-coloured light formations were spotted by skygazers in Richmond, Virginia and Las Vegas, Nevada, prompting online speculations about alien invasion at that time.