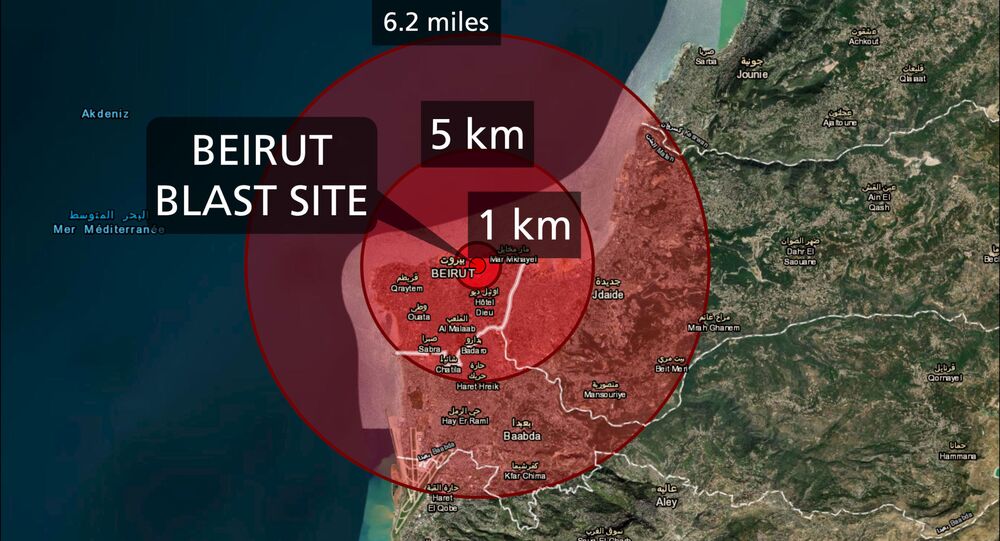 Tuesday’s massive explosion in the Lebanese capital killed over 150 people and injured 5,000 others, causing an estimated $3 billion in damage and leaving 300,000 people homeless in an instant. It’s estimated that up to half of the city of 2.4 million people has been affected by the blast in one way or another.

Social media users seeking to educate their fellow countrymen and women about the extent of the damage caused by Tuesday’s ammonium nitrate explosion in Beirut have started a new viral trend – exploring how major cities in their own countries would be affected if they were rocked by a blast of similar magnitude.

The trend has seemingly spontaneously been picked up by users in cities across the world, from Los Angeles and Hong Kong to London, Prague, Chicago, Cork, Kathmandu, and many others.

To help you understand the true scale of the explosion in Beirut, here is a map showing the would-be impact area if it happened in Mong Kok: https://t.co/JTGIDvoSRK

Imagine the Beirut explosion would happen in Prague - this map shows what the scale and impact would be.@hosekj @al_horalistani @surowicz might be interested.
Thanks to my Lebanese friend Camille for making this for us. pic.twitter.com/6MPF2DQR1O

The comparison between what happened in #Beirut with a similar explosion in New York City or London is brutal & sobering #BeirutExplosion #Lebanon pic.twitter.com/x3NczLRNLY

Users expressed a variety of motives for making the maps, from a desire to contextualize the scale of the disaster, to an effort to raise money for disaster relief.

Beirut blast was so intense that Cyprus felt its tremor 240 km away. To understand the force, I tried translating the impact on Nepal's map. If Narayanhiti (KTM) were the center, the tremor would be felt in six-eight districts surrounding Kathmandu. That's a massive area. pic.twitter.com/iPpFpGFJR0

Canadians in particular seemed especially shaken by the scale of the disaster, with some immediately recalling the Halifax explosion of December 6, 1917, which rocked the city after a pair of ships, one of them carrying high explosives, collided in Halifax Harbour. That disaster was estimated to have taken the lives of nearly 2,000 people and injured 9,000 others, and leveled much of the city.

Joanna Merson, a cartographic developer from the University of Oregon, offered slightly corrected versions of maps after noticing some errors in the amateur comparisons, and posted a thread on Twitter explaining her technique.

1/x This morning I woke up to see viral maps incorrectly comparing the damage area of the Beirut explosion to London and New York. I have corrected the maps with a little thread to explain my corrections. img 1. tweet with my notes. img 2-4. my new maps. pic.twitter.com/nz9Q1X0wLt

157 people were killed, with more than eighty remaining missing and 5,000+ receiving injuries of varying severity as a result of Tuesday’s ammonium nitrate blast in Beirut, which completely leveled much of the port, heavily damaged the surrounding area, and broke glass or otherwise damaged infrastructure several kilometers from the blast’s epicenter.

The blast was so powerful that it was felt as far away as northern Israel and Cyprus (240 km away), and measured as a 4.5 local magnitude earthquake on the Richter scale by the Seismological Observatory in Jordan. Observers estimate that the blast had an explosive yield of between 200 and 500 hundred tonnes of TNT. For comparison, the US military’s B61 nuclear gravity bomb is estimated to have an explosive yield of about 300 tonnes of TNT.

Satellite Images of Beirut Port Before and After Deadly Blast