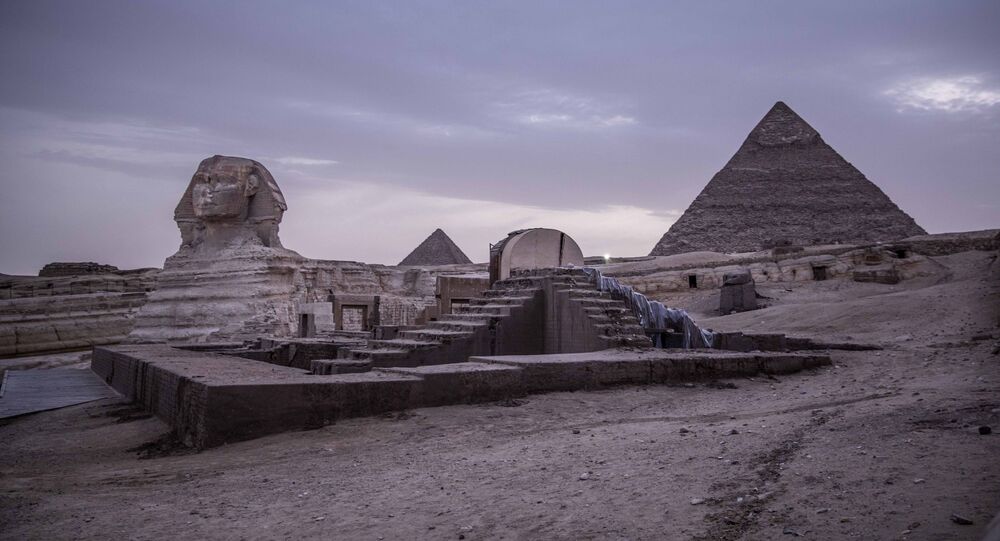 Elon Musk has been the subject of controversy this weekend after he tweeted that the iconic structures in Giza, Egypt, were built by an otherworldly being - a narrative commonly repeated among conspiracy theorists.

An Egyptian government official has invited Elon Musk to visit the iconic pyramids at Giza after the Tesla CEO suggested that the northern African country's famous structures were built by extraterrestrials.

The Tesla CEO and founder of Space X tweeted on Friday that he believed "aliens" were responsible for building the massive structures in Giza near Cairo.

​Despite Musk seemingly retracting the statement, Egypt's Minister of International Cooperation, Rania al-Mashat, invited the billionaire to "explore the writings about how the pyramids were built and also to check out the tombs of the pyramid builders".

​Reacting to Mashat's invitation, some Twitter users called for the Tesla CEO to be given first class treatment.

Sorry, Dr.#zahi_hawass reply was unqualified
Dr. Rania reply was amazing, but I prefer if we take the first step & have a call with 1 of Cairo hotels & arrange with Egypt air - first class tkt for Sir. Elon
& invite him complimentary to have a visit to Egypt.#welcome_to_Egypt

Thank you Mr. Musk for what you have said about the pyramids. Should you be able to visit Egypt, It will be my honor to invite you for lunch at Marriott Mena House. pic.twitter.com/6qHLnG251s

Others made it a point to compare the historic success of ancient African and Egyptian civilisations.

Europeans were still in grass huts then,so 2 save face their descendants cook up the b/s explanation it must have been Aliens,not ancient Egyptians,c'mon,give credit where it is due.Egypt got domesticated wheat=>GDP=Pyramds.& the only Martians will be PPl when they settle there😎

​Some internet users, however, supported the alien construction theory or, at least, cast doubt on the historical record.

Everyone knows that aliens built the pyramids or at least instructed humans how to do it.

I’m not sure either way, but I would like to understand how they did cut these stones w such precision and move them. Also did they have cranes? How did they get these gigantic stones up the sides of the pyramids? There are still so many unanswered questions!!!

​Musk later tweeted a BBC article titled 'The Private Lives of the Pyramid-builders' which he described as a "sensible summary" for how the structures were built.

The Tesla CEO has a long history of offering eccentric opinions, including other theories involving aliens and universal simulations.

During an appearance on the Joe Rogan Podcast in 2018, in which he openly smoked marijuana with the host, Musk said that humanity is likely in a "simulation".

"If you assume any rate of improvement at all, then games will be indistinguishable from reality, or civilization will end. One of those two things will occur", Musk mused. "I think, most likely — this is just about probability — there are many, many simulations. You might as well call them reality, or you could call them multiverse".

Who Build the Pyramids?

The question of how the pyramids were built has been a topic of discussion for archeologists and researchers for decades. In 2018, experts developed their understanding of how the Great Pyramid, the largest of the structures was built by Fourth Dynasty Egyptian pharaoh Khufu, some 4,500 years ago.

Live Science reported that researchers from the French Institute for Oriental Archaeology in Cairo and the University of Liverpool in England discovered remnants of a well-preserved ramp system in the ancient Hatnub quarry in the Eastern Desert which would have made pulling the stone blocks which make up the structure possible.

To move the gigantic alabaster stones up a slope likely required sleds, rope and an enormous amount of human power. Along the ramps' sides were two staircases that were lined with postholes said to be where ropes could be secured.