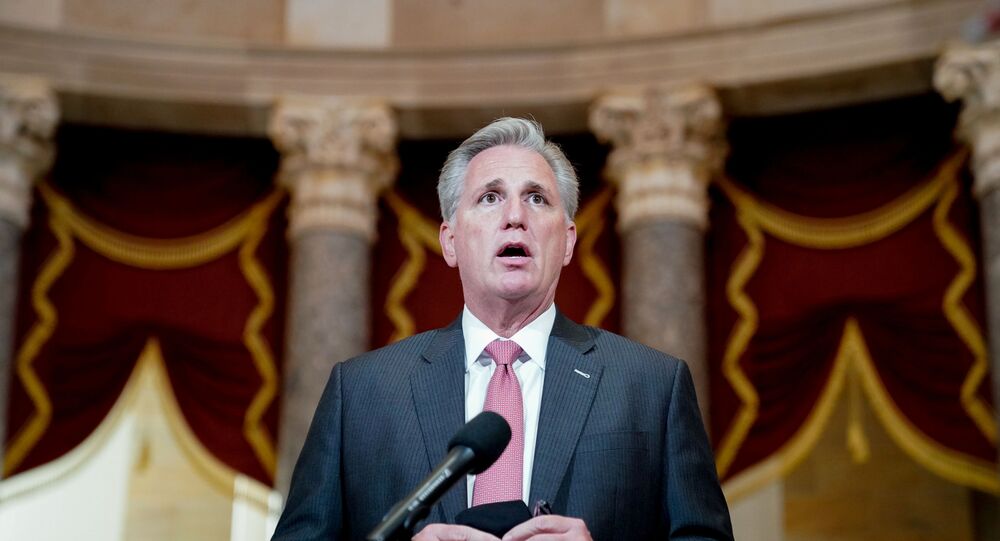 Amid nationwide protests in the US against racism and police brutality, police officers have become targets for criticism and even attack, but this time the definition of "police officer" proposed by Siri and subsequently denounced by House Republican Minority Leader Kevin McCarthy appeared to not be what he condemned.

The Republican leader in the House of Representatives, Kevin McCarthy, on Thursday saw a "big tech bias" in Siri's definition of "police officer", after noticing that the Apple voice assistant offers the option when asked to define "a demon".

The McCarthy critique comes amid a fresh wave of allegations from GOP members against social media corporations, in particular Apple and Google, that the tech companies lean toward the agenda of the left wing of American politics, with US President Donald Trump accusing "big tech" of being controlled by "the Radical left".

In this particular case, McCarthy apparently decided that amid the ongoing anti-police-brutality protests, Apple's Siri had joined the ranks of the so-called 'radical left', and was criticising police throughout the country.

The House Minority leader named Siri's definition "disgusting" and demanded that Apple "answer for why they're instigating this kind of hate in America". After he "exposed" the so-called "big tech bias", McCarthy urged his supporters to "go ahead and try it", which they did, quickly discovering that things were not as black and white as the GOP lawmaker made them out to be.

Go ahead and try it.

Apple needs to answer for why they're instigating this kind of hate in America. pic.twitter.com/mLg05UCVIZ

​Twitterati cited several dictionaries which implied that "demon" was a slang word for police officers and detectives in Australia.

Crazy the head of the House GOP can't do a simple fact check > "the word is an informal and archaic colloquialism used to describe a “detective or policeman” in the countries of New Zealand and Australia, according to Dictionary. com."https://t.co/IMz32lHH3Z

From the Oxford English Dictionary: pic.twitter.com/895gPxnqCB

​Users accused McCarthy of being America-centric and reluctant to take into consideration other forms of English language used throughout the globe.

What do you mean other countries exist, I only know america

​Sadly, McCarthy and all other Trump sycophants, there is no world outside the United States. They are too simple-minded to consider the American version of English doesn’t have the same slang as non-American English-speaking countries. I bet they think America invented English.

​Others blamed the Republican for paying attention to non-essential issues, referring to larger problems like the ongoing COVID-19 pandemic, hunger and lack of housing in the US.

You have nothing else to do than word searches as people are hungry, homeless, and dying. America sees what the GOP has become under Trump. More importantly, God sees.

I'm glad to see you don't have anything important to do today.

Our economy is falling apart. 150K people are dead because @realdonaldtrump bungled the response to Covid-19 and now he is actively working to discredit our elections. And THIS is what you focus on? Unreal.