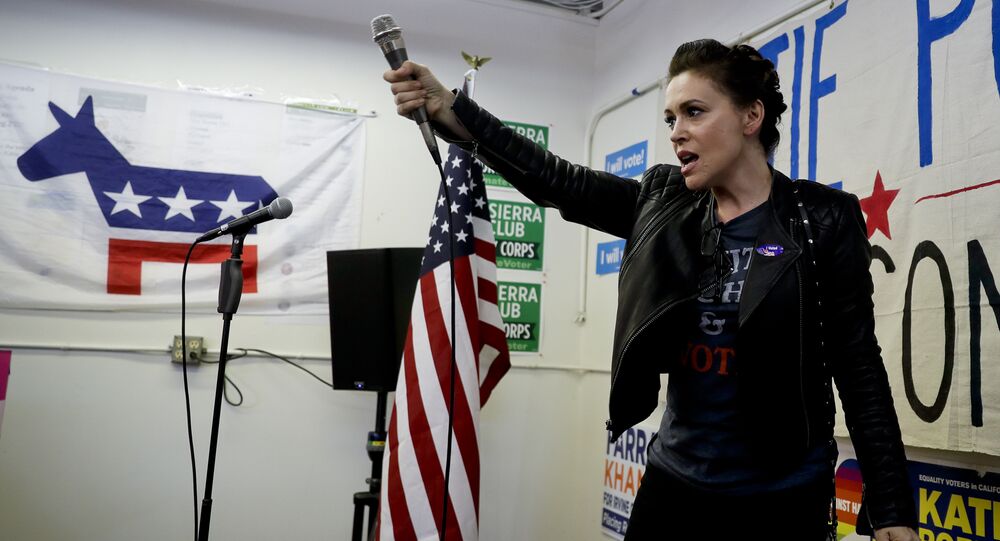 In her tweet, Milano apologized for “putting out something that hasn’t been verified”, while arguing that it seemed important “to get out there”.

American actress and political activist Alyssa Milano addressed a recent incident in the Manhattan borough of New York City involving the arrest of a protester by plainclothes officers.

Commenting on video of the incident, which has since gone viral, Milano tweeted: "it looks like #TrumpsGestapo kidnapping protestors".

She apologized for "putting out something that hasn’t been verified”, while arguing that it seemed important “to get out there", and asked if anyone could confirm "what's going on here", referring to the events depicted in the video.

CAN ANYONE CONFIRM WHATS GOING ON HERE?

It looks like #TrumpsGestapo kidnapping protestors. I’m sorry for putting out something that hasn’t been verified but this seems like it’s important to get out there.

​Fox News described Milano's speculation as "incorrect", however, arguing that "Milano’s tweet implies she's under the impression that the officers were federal agents amid heightened sensitivity to protesters in Portland, being scooped up into unmarked cars", whereas the NYPD earlier announced that the protester was taken into custody by members of the Warrant Squad.

Looks like the Gestapo and Trump are doing what they do best. Commit crimes and get away with them without any punishment.

Why must there be unmarked vehicles and unidentified enforcers now days? Why the secrecy? If enforcement is legit what are the enforcers afraid of? Looks like authoritarian type gov't tactics me. Trump's tyranny on full display around the country.
Vote all blue November 3rd.

​Some brought forth a more artistic depiction of "Trump's Gestapo" mentioned by the actress.

This is what’s actually going on:#TrumpGestapo

​Others, however, did not appear to see eye to eye with Milano on the issue.

Girl, it's called an arrest. They do that when you break the law. https://t.co/a2vvAhahmD

update: NYPD arrested someone who was suspect of 5 separate assault charges

you were wrong again, Milano.