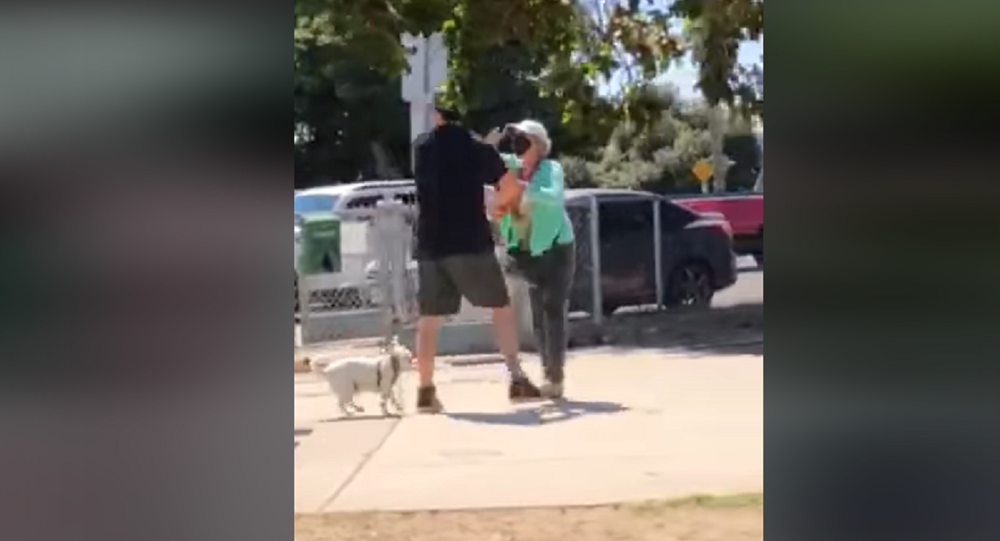 Video: US Man Pepper-Sprayed by Bystander for Not Wearing Mask in Park

Police in San Diego, California, are conducting an investigation after local resident Ash Sherilynn O’Brien reported that her husband was pepper-sprayed last Thursday while eating at the Dusty Rhodes Dog Park without a mask.

In a video, captured by a bystander and shared on social media by O’Brien, an unidentified woman wearing a mask can be seen grabbing her dog’s leash while pointing pepper spray at a man’s face while he raises his arms in the air. The mace-wielding woman can also be seen grabbing the man’s arm at one point to prevent him from turning away.

The incident took place near a picnic table at the dog park at around 3 p.m. local time on July 23. The victim, who did not want to be identified, told police that the woman approached him and yelled at him for not wearing a mask before proceeding to pepper-spray him, the San Diego Union-Tribune reported.

“This is my husband getting maced by a random old lady,” O’Brien wrote in a caption on Facebook accompanying the captured footage.

“We were just sitting down eating lunch and minding our own business. We were not wearing masks because we were eating. You can’t wear a mask and eat at the same time. She kept calling us idiots and flipping me off. Then she started saying more stuff and I told her to leave the park and stop harassing us. She then came right up to our table wear [sic] we were eating, pointed the mace at me first and got a little on me, and then my husband stepped in and took the entire can,” O’Brien added.

“Thank god for the bystander that took this video because we are going to the police now to press charges. I am sharing this because people need to watch out for this lady in San Diego. Please share to spread awareness. That is me crying hysterically in the background because my innocent husband just got maced for no reason. We want justice.”

In a statement to the Union-Tribune, O’Brien said that the incident occurred after she made a comment about someone else’s dog jumping on the picnic table where she and her husband were seated.

In another Facebook post shared on Monday, O’Brien also insinuated that she has been receiving messages that her husband deserved to be accosted for not wearing a mask.

“Me and my husband deserved to be assaulted because we weren’t wearing masks while eating? Well listen here. One: you can’t wear a mask while you eat. Two: we were sitting at the table by ourselves and she came up to us breaking the social distancing, plus there was plenty of other people who were not wearing masks at the park. Three: mask or no mask as long as you aren’t bothering anyone you don’t deserve to be assaulted. Four: Using any type of lethal spray like that causes an excessive amounts of your body fluids to come out such as snot and spit. So if you’re so terrified of covid why would you put yourself at more risk by getting someone else’s bodily fluids all over you,” O’Brien wrote in the post.

The victim suffered redness, burning and irritation to his eyes, face and neck, as well as blurry vision, according to the Union-Tribune.

Police spokesperson Officer Billy Hernandez told the Union-Tribune that it’s illegal to use pepper spray except in matters of self-defense. The case was assigned to a detective on Monday.

AIIB Must Progress 'With The Times' To Tackle COVID-19, Build Shared Goals For Mankind - Xi Jinping