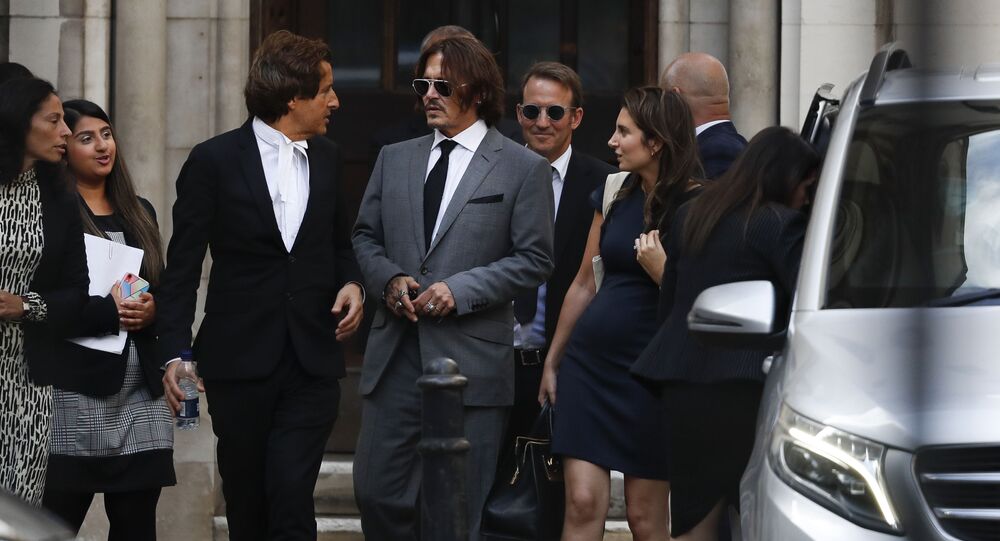 Pirates of the Caribbean star Johnny Depp is currently suing British newspaper The Sun over a 2018 article referring to him as a “wife-beater” following the claims of his ex-wife Amber Heard. For the second week in a row, the UK’s High Court has been hearing a slew of provocative details about the couple’s one-year marriage.

A photo showing Johnny Depp fast asleep on a sofa with ice cream dripping all over his jeans has been circulating online since Monday, after being shown to the UK’s High Court during the actor’s libel trial against The Sun newspaper, the same outlet reported.

No prizes for guessing the most striking image to come out of the Depp V The Sun libel trial today... #icecream 🍨 Catch up on the biggest court moments as the case enters its second week: https://t.co/byJgRYy6QL pic.twitter.com/N55WyTnOTs

​The pic, presented by Depp’s ex wife Amber Heard, was reportedly taken in Boston in August 2014, as he was preparing to start his detox from prescription drugs in the Bahamas. Depp is pictured cross-legged and open-mouthed, as the melted treat from an open tub is flowing down to the floor. The Edward Scissorhands actor reportedly argued during the trial that his ex-wife Heard labelled him “pathetic” as she showed him the image after it was taken. Depp justified his posture by saying that he had been suffering from work overload during that time.

“There was one photograph that Miss Heard showed me from Boston,” Depp said in the court on Monday, as quoted by the Sun. “I was preparing to go to the Bahamas to detox from the opiates and I had been working 17 hours a day prior to that."

“She asked me to hold her tub of ice cream. I have my right hand in my pocket and I’m holding the ice cream in the other,” he continued. “I was obviously on the nod and very tired, falling asleep, and the ice cream then spilled all over my leg and then she took that … and showed me the next day and said 'Look at what you've become … look at you, it's pathetic'.”

Many netizens, however, showed their support for the actor after the image emerged online, even dubbing it “relatable as hell”.

if Amber Heard is trying to paint Johnny Depp as a cool, relatable dude who listens to good music and does hilarious stuff like call people childish nicknames and pass out on the couch covered in ice cream, she's doing a great job

As much as I didn't want to see that pic of Johnny Depp asleep covered in ice-cream, I to see a picture of Amber Heard's excrement a million time less, thanks. 👍

The photo was presented during Depp’s libel trial against the Sun’s publisher News Group Newspapers over the magazine’s April 2018 article that called the actor a “wife-beater”. At the time, the couple had already divorced and finalised their settlement by January 2017. The actor is also suing his ex-wife in a separate case in the United States for allegedly presenting him as an abuser in a Washington Post article.

Heard argues that her ex-husband was violent towards her on several occasions, including after her 30th birthday party in April 2016, when he is said to have grabbed the actress by the hair and thrown a bottle of champagne towards her. The actor denied the attack, but reportedly said during Monday testimony that the couple had a row on that day after he learned during a business meeting about losing hundreds of millions of dollars.

Johnny Depp has now finished providing evidence to the High Court, which had heard during the last week a number of shocking details about the couple’s marriage, which lasted slightly more than one year. It included the alleged row between the two after Johnny Depp found poo left by Heard or some of her friends in their bed.