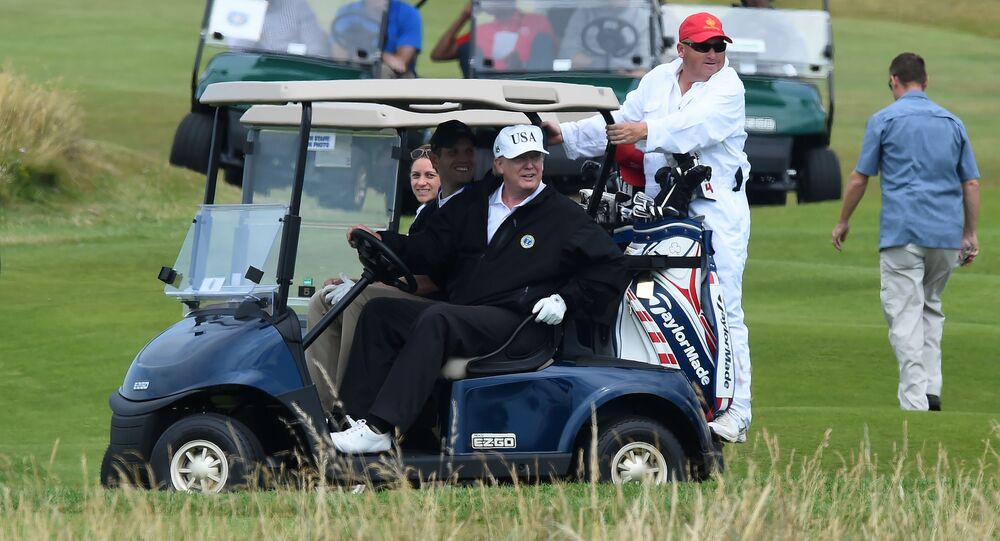 US mainstream media has repeatedly criticised the 74-year-old president for engaging in his favourite pastime during the coronavirus outbreak, which has infected 3.4 million people in the United States. Trump has, in turn, accused the media of dishonesty and bias against him.

Social media users were left enraged after a video showing President Donald Trump driving a golf cart with his caddie riding along while holding on in the back of it was posted online by White House correspondent Kelly O’Donnell. The journalist captioned the video, saying that the golf course is the only place President Trump gets do drive himself.

Brief video clip from the president’s golf outing. The course is the only place he gets to drive himself. Secret Service positioned nearby. The caddie holding on in back. pic.twitter.com/CbX31MPYD5

​The fact that the president’s caddie was riding in the back of the cart instead of next to him infuriated netizens, who accused Donald Trump of being a snob.

Such an elitist that he won’t let the caddy sit next to him.

​Others compared the caddie to the American public and accused the president of golfing at a time when the situation with the coronavirus outbreak is getting worse in the United States. On Sunday, the state of Florida alone recorded 15,000 new infections.

We are all the caddy. Hanging on for dear life as trump drives wildly down the road

Playing golf while Americans continue to die from COVID. Unbelievable.

​Trump has defended spending time engaging in his favourite hobby, saying he uses it as a form of exercise. The president has insisted that he doesn't spend much time on the court and never plays on weekdays.

I know many in business and politics that work out endlessly, in some cases to a point of exhaustion. It is their number one passion in life, but nobody complains. My “exercise” is playing, almost never during the week, a quick round of golf. Obama played more and much longer....

...rounds, no problem. When I play, Fake News CNN, and others, park themselves anywhere they can to get a picture, then scream “President Trump is playing golf.” Actually, I play VERY fast, get a lot of work done on the golf course, and also get a “tiny” bit of exercise. Not bad!

​However, Trump’s statements backfired, with users reminding him of promises he made during his presidential campaign, when he criticised his predecessor Barack Obama for spending too much time on the court.

"When you're in the White House, who the hell wants to play golf?""

"There won't be time to go golfing all the time."

"I'm going to be working for you. I'm not going to have time to go play golf. Believe me."https://t.co/wKjiH5dFWm

​Other netizens ridiculed Trump’s remark about using golf as a form of exercise.

Wow look at him exercising!!!!

He must be exhausted by all that exercise