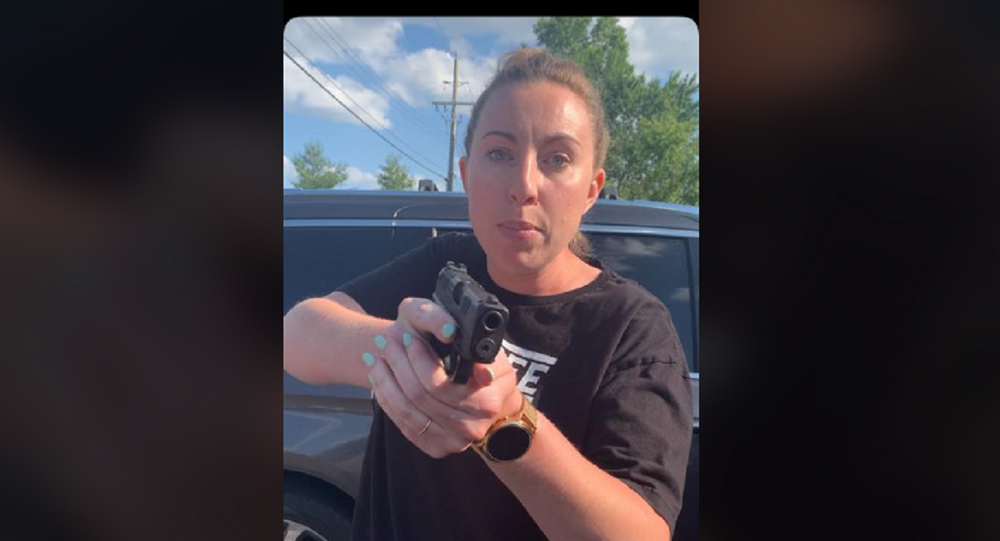 Footage of the incident, shared widely on Twitter, shows a woman pointing a handgun at the camera while yelling “Get away.” Another woman behind the camera, who was identified by Detroit News as Takelia Hill, says, “She got a gun on me.” Hill can also be heard telling her daughter to call the police.

At one point in the video, after walking backward while shouting “Get the f**k back!” and “Back the f**k up” while pointing the gun at Hill’s face, the woman gets into the passenger seat of a car, which drives away.

“Before I could walk into Chipotle, this woman was coming out, and I had moved out the way so she can walk out," Hill’s daughter told Detroit News. “She bumped me, and I said, 'Excuse you.' And then she started cussing me out and saying things like I was invading her personal space.”

At that point, Hill’s daughter called her mother over because she was scared.

“I walked up on the woman yelling at my daughter," Hill told Detroit News. “She couldn’t see me because her back was to me, but she was in my daughter's face."

On Wednesday, Hill shared a video and photos of the encounter on her Facebook page with the caption: “So this is America....I’ve never in my life had a gun pulled out on me let alone two and while I had my three daughters I’ve never felt so helpless in my life I’m so shaken up.”

The video was also shared on Twitter by a user named “Makay,” who identified herself as the daughter’s aunt.

“Update!!!!! They were let go !!! The police just took the guns away !!! Ridiculous!!!! They said they couldn’t arrest her because my niece [sic] mother hit there [sic] car (with her hand ) to stop them from hitting my niece!!! Justice needs to be served!  This is white privilege,” Makay tweeted on July 1.

The Oakland County Sheriff’s Office has yet to confirm whether the woman with the gun has been arrested, but it has confirmed that the incident did occur, that there were no injuries and that the case will be sent to the prosecutor’s office to see whether charges will be filed.

“I am deeply disturbed by an incident last night where a woman pointed a cocked gun at another woman during an argument," Oakland County Executive David Coulter said in a statement Thursday, Detroit News reported. "This behavior is unacceptable. I wholly expect the prosecutor to bring charges that reflect the severity of the incident.”

"There is nothing acceptable about what happened in Orion Township last night at the Chipotle. It is abhorrent to think that some in this country have such a sense of self-righteousness and entitlement that the idea of pulling a gun out on an unarmed child and her mother is OK," Bayer said, Detroit News reported. "It is not, and I condemn anyone who thinks otherwise. My heart goes out to Ms. Hill and her daughters, who may now forever be traumatized by this experience."

"Michigan needs commonsense gun reform, and we need it now. People should feel safe going about their day and not have to worry about having a gun pulled on them during a conflict. This incident clearly shows we have much work to do, because this is not how we should be treating each other,” she said.

#TrumpIsNotWell Trending on Twitter After His Baby-Step Video Goes Viral