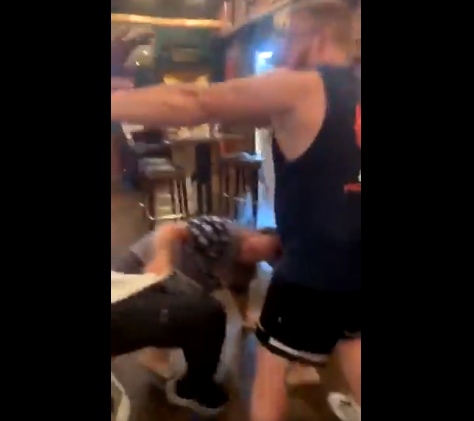 A violent brawl broke out inside an Arkansas restaurant over the weekend over social distancing measures imposed during the COVID-19 pandemic.

The brawl, which took place Saturday inside the Saltgrass Steak House in Little Rock, was captured on video by Seth Crews, who was having dinner with his brother at the restaurant.

​In the video, a woman wearing a face mask at a bar appears to tell two others, who were not wearing masks at the bar, that they were not abiding by social distancing guidelines and were less than 6 feet away from her.

“You’re supposed to be 6 feet away from me!” the unidentified woman is heard saying.

As the argument escalates, a man wearing a USA shirt walks over to the bar, where the woman wearing a mask and her boyfriend were sitting.

According to Crews, the man wearing the USA shirt “came up and was touching … [the mask-wearing woman’s boyfriend’s] back and giving him a little shove, and he just wasn’t taking it, and that’s when it all started,” Newsweek reported.

The mask-wearing woman’s boyfriend then appears to throw a bottle, which prompts an all-out brawl that quickly grows in size as other patrons join in to stop the fight.

“All the restaurant employees were trying to help; they were just in shock like the rest of us,” Crews said, adding that his brother also tried to break up the fight.

“I think if just someone is telling you to stay away from them, you probably shouldn’t get near them, and maybe if you don’t want to get coronavirus, don’t go to a restaurant,” Crews added.

According to local outlet KARK 4 News, no one involved in the altercation has yet filed charges. Bars in Arkansas opened up on May 26; indoor seating at bars and restaurants is still restricted to 33% of total capacity.

‘Planet of the Apes?’ Hundreds of Monkeys Brawl Over 'Single Banana' in Thailand – Video