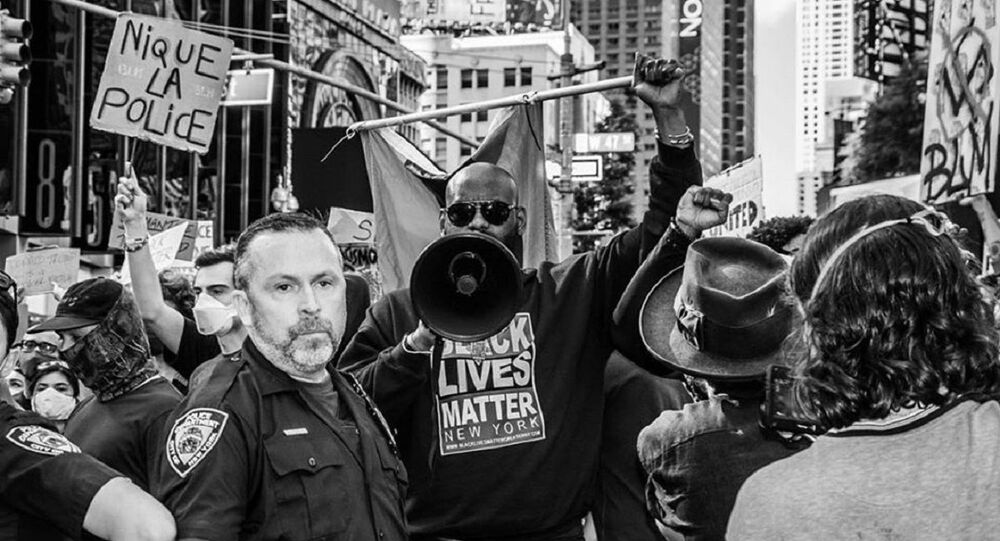 This is not the first time that Hawk Newsome has made such a comment. Addressing demonstrators on 7 June during protests over the death of African-American man George Floyd, who died at the hands of a white police officer, he said: “Give black people their rights or we will burn this country to ashes”.

Social media users were left disgusted by a statement of the president of Greater New York Black Lives Matter (BLM) that was made during a recent interview on Fox News. Hawk Newsome spoke with host Martha MacCallum about the direction of the Black Lives Matter movement, which claims to be fighting against racial discrimination and violence towards African-Americans, and about the violent behaviour of some of the demonstrators. Newsome said that the riots and violent behaviour were the only way to make authorities pay attention to the discrimination and police brutality against African-Americans.

"Let's observe the history of the 1960s, when black people were rioting. We had the highest growth in wealth, in property ownership. Think about the last few weeks since we started protesting. There have been eight cops fired across the country. Any time a cop hurt a woman, hurt a child, hurt pregnant people, hurt our elders there was always a call for due process, you must wait, but the moment people start destroying property now cops can get fired automatically. What is this country rewarding? What behaviour is it listening to? Obviously not marching”, said Hawk Newsome.

MacCallum also asked Newsome to comment on a remark he made earlier this month about burning the country to ashes. The president of Greater New York Black Lives Matter said the following:

Ron Coleman, a New York attorney and political commentator, said that Newsome’s statement proves that the intentions of Black Lives Matter are not peaceful.

"No one can pretend to be surprised by these comments, because the posture of BLM is entirely subversive. Its intentions are not peaceful and its putative model is the Bolshevik seizure of power in 1917. Having said this, however, in reality the BLM leadership is bourgeois and this talk is nothing but posturing. BLM has every interest in preserving the state and society it claims to despise, because its true purpose is to latch onto that society’s considerable wealth and benefits, merely from a better position than it does now. The young white radicals that make up the main body of BLM street agitators lap up this agitprop gratefully. It makes them feel revolutionary and virtuous as they turn up the XM Radios in their BMW’s for the trip back to the suburbs”.

Newsome's statement caused uproar on social media, with people saying that such comments are equivalent to a terrorist threat.

​Others claimed that Newsome and Black Lives Matter want to start a racial war and berated Fox News for giving a platform to the movement.

What he’s saying is he wants a racial war!

It was disturbing that you gave this terrorist a platform to speak.

​Still others called members of BLM criminals and noted that fear tactics are being used prior to the election.

They're just criminals. They all have excuses for harming others.

Nice. Fear tactics. Must be getting close to Election Day.

​During the interview, Newsome also said that Jesus Christ was the most famous black radical revolutionary in history and that he was treated just like Martin Luther King Jr. "If you read the Bible it will say that Jesus had feet like burnt brass and hair like wool. I don’t know if you noticed, but our hair seems to be more like wool and we seem to be likened to that colour than anyone else. You know it’s just the hypocrisy and the white supremacy in America and the world that would show us portraits of a pasty white Jesus. Jesus was not white. We all know this”, Newsome said.

The Black Lives Matter movement began in 2013 following the death of unarmed 17-year-old African-American boy Trayvon Martin, who was killed by neighbourhood watchman George Zimmerman. The incident caused huge public outcry, but despite calls on authorities to imprison Zimmerman, he was acquitted by a jury. BLM became widely known in the following years, staging protests against police brutality and racial discrimination.

The United States has recently seen a vast wave of protests following the death of George Floyd, an African-American man who died in police custody at the hands of police officer Derek Chauvin. Peaceful demonstrations have often turned into riots, with protesters burning buildings and looting shops. The violent behaviour during the demonstrations has been harshly condemned by President Donald Trump. Following several days of protests, authorities charged Derek Chauvin with second-degree murder, while the other officers who were present at the scene were charged with aiding and abetting murder.