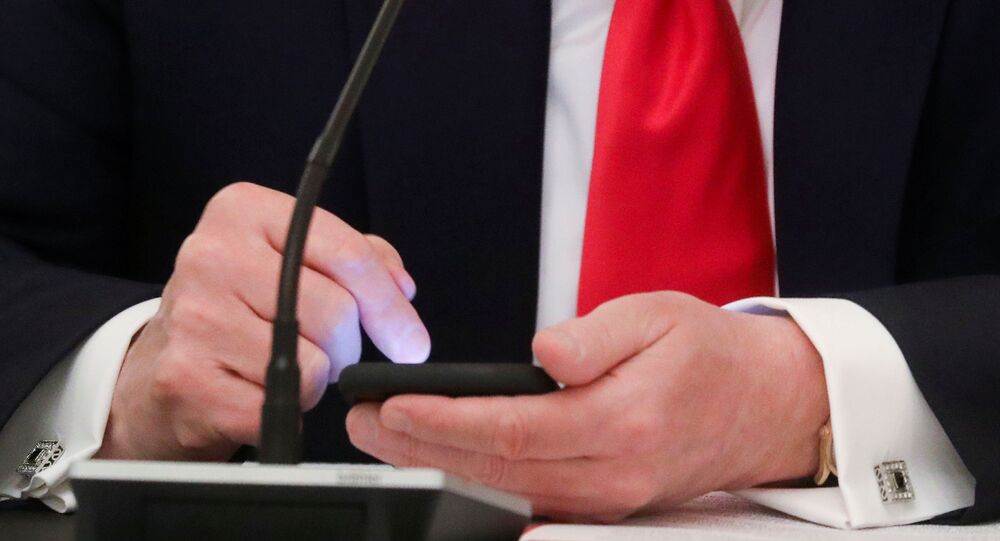 The US president earlier shared viral footage mocking CNN compiled by a popular meme creator named Carpe Donktum. The edited video featured a black toddler running away from a white toddler and was later removed by Twitter and Facebook, following a copyright claim by one of the parents.

Twitter has suspended the account of Carpe Donktum, whose memes have been shared by US President Donald Trump from time to time, for “repeated” violations of copyright complaints, the company’s spokesperson told Fox News.

The user, whose identity remains unconfirmed, himself commented on the news, saying that his ban from the platform was “permanent”.

“Twitter has not provided me with any avenue to get my account back, so I assume they intend this to be final and permanent”, the user wrote in a statement.

According to the meme creator, the move was the result of a video he made highlighting the issue of “fake” reporting that was recently posted by Donald Trump.

Twitter permanently suspending @CarpeDonktum is a reminder that you can spend years working to build up a following and Twitter can just axe you whenever the hell they want pic.twitter.com/vwXcrhbiSD

Last week, the US president shared an edited version of viral footage featuring a black toddler running away from a white toddler with the CNN logo next to it and a message saying “terrified toddler runs away from racist baby”. The video then shows “what actually happened” by depicting the two toddlers running towards each other and hugging. “America is not the problem… fake news is”, the next message in the video reads.

The parent of one of the toddlers who initially shared the video in 2019 then filed a complaint over copyright infringement and the video was effectively removed from the platform.

“I have ALWAYS complied with DMCA takedown rules, and I have submitted counterclaims when necessary, but I have NEVER uploaded content that has been removed”, Carpe Donktum commented on Twitter’s decision.

“I have been banned for being effective and they won't even look me in the eye as they do it. They have responded to ABC News, but not me, THE ACCOUNT HOLDER”, he wrote.

Following the news of Carpe Donktum's being banned by the platform, many have shown their support for the meme creator. The eldest son of the US president, Donald Trump Jr., has also come to the user’s defence.

“It's clear @twitter & @jack are engaging in a dedicated campaign to shutdown conservative voices as we get closer to the election. Twitter claiming he violated 'copyright infringement' on videos that are public domain or clearly parodies covered by fair use is beyond fraudulent”, Donald Trump Jr. wrote on his Twitter.

And many rushed to agree with him, calling upon social media users to ditch “leftist” Twitter and switch to a new social networking service Parler.

The censorship is getting more aggressive and in your face every single day.

When will someone in DC actually DO SOMETHING?

He posted memes based upon fair use.@DonaldJTrumpJr

Twitter permanently suspending @CarpeDonktum is a reminder that you can spend years working to build up a following and Twitter can just axe you whenever the hell they want pic.twitter.com/vwXcrhbiSD

As an aside, @CarpeDonktum is a friend and one of the nicest guys you'll ever meet.

He's incredibly cognizant of copyright law and has always been very careful about compliance.

Make the switch to Parler. Twitter will never change from its leftist policies.

All the left has is hate.

Carpe Donktum has been perceived by many in the American media as a conservative figure and a devoted Trump supporter whose memes have occasionally been reposted by Donald Trump. The president and his re-election campaign team have repeatedly argued that Facebook and Twitter have been trying to “silence” conservative voices.