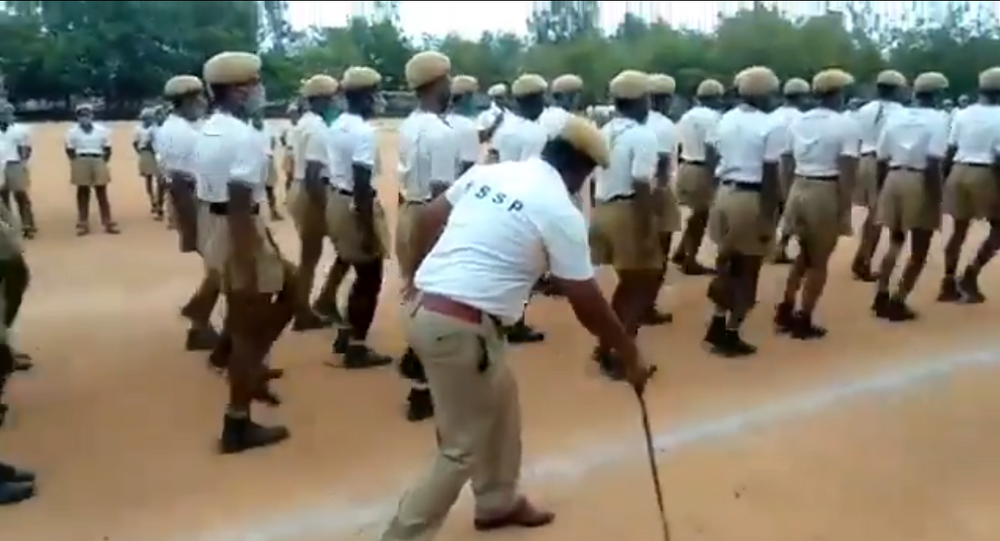 New Delhi (Sputnik): While uniform-clad soldiers swinging their arms in sync and goose-stepping in unison can spark a sense of patriotism in anyone, a unique drill in a small Indian town is leaving people laughing out loud as netizens lauded the trainer for his dedication to the job.

A police trainer in the Indian state of Telangana has attracted a major fan following and the love of social media users for his unique way of holding a drill and for his passion for his job.

In the video, which is going viral, the trainer can be seen holding a stick and pointing it to the ground in right-left motion as the troopers tapped their feet in rhythm. The video turned hilarious when the instructor crouched on the ground to watch each and every move of his trainees closely and even went into pushup position on the ground. All this happened along with the background shouts “ek, do, teen, aage-peeche” (One, two, three, forward-backward).

And this is drilling 😁

​The video has racked up 394,000 views on Twitter, with users giving it all sorts of names such as "grilling", "thrilling" and praising the drill instructor.

A devoted teacher and innovator to make the drill less boring

These 'ustaads' in fauji / paramilitary training centres are amazing task masters, perfectionists and chisel their trainees into perfect beings. They are passionate about their duty. Ustaads are the jaan of such organizations 👏🏻👏🏻👏🏻

Its so freakin dead😂 and respectful to watch'em

​Earlier, Indian police were seen performing the drill, where personnel ran with batons between their legs. The drill which looked similar to the wizarding sport Quidditch in Harry Potter, which is played by mounting on broomsticks in the magical Hogwarts series, left Twitter users in stitches.

Have never seen anything like this. Cops using baton instead of horse to act as mounted cops during an anti-riot drill in Firozabad district in Uttar Pradesh. I am sure this drill could have been avoided till the actual horses arrived. @Uppolice pic.twitter.com/etR9hlb8Zk