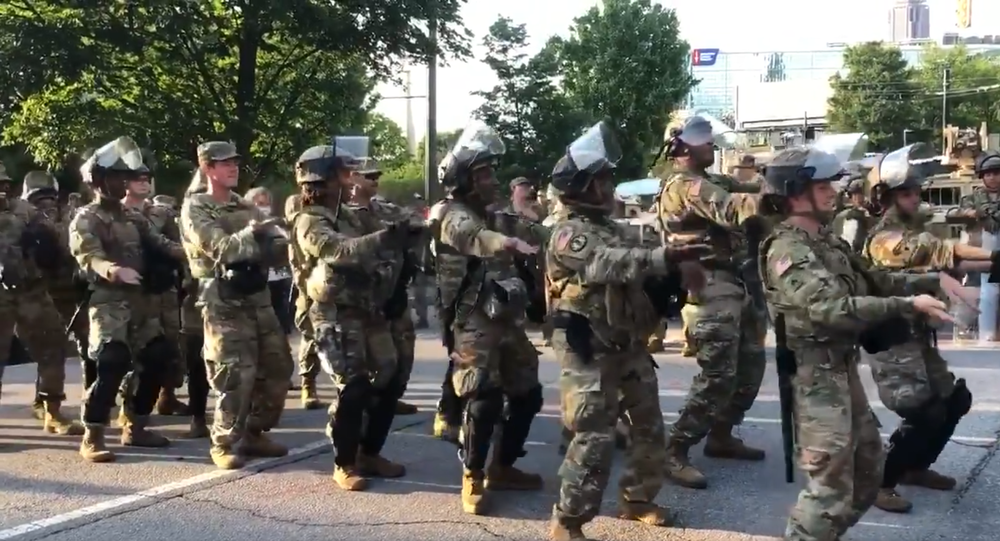 Governors in at least 31 states have called up National Guard units to try to quell the ongoing nationwide protests over the killing of African American George Floyd at the hands of Minnesota police last week. 80 localities have implemented curfews to try and quell the violence, which has spread to nearly every major city in America.

A viral video of National Guard troops in Atlanta, Georgia is making the rounds on social media, racking up over 7.3 million views on Twitter alone.

The National Guard tribute to the famous 90s song and dance, filmed Friday evening in downtown Atlanta, 15 minutes before curfew went into effect, was shot from multiple angles, including an overhead helicopter, as cameraman from several media outlets as well as local residents captured the spectacle using their phones.

Countdown to curfew in Atlanta pic.twitter.com/vvITsNMSdB

SKYFOX 5 was over downtown Atlanta where protesters and @GeorgiaGuard were dancing the Macarena. Tonight's curfew in the city begins at 8 p.m. pic.twitter.com/W4GM4aEibG

Local media characterized the performance as “one perfect moment” of peace and lightheartedness after over a week of protests, rioting, and confrontations between demonstrators and police.

Online however, the videos immediately divided users into hostile camps.

Some Twitter users expressed support for the show, calling the dance “heartwarming,” and joking that it was a little-known fact that “the Macarena solves everything.” “The US needs to look to Atlanta! This is what it is about,” one user urged.

Not everyone was impressed however, with some making macabre jokes, while others pointed to the dance’s alleged use in psychological operations during the 2003 US occupation of Iraq “designed to compel the protesters to abide by curfew.”

My bipartisan hot take is that the Macarena is always bad. pic.twitter.com/ybvsoMLjZL

👆Not an isolated incident. This is also from the US occupation or Iraq pic.twitter.com/eJrLCo4hSg

“When fascism comes to America, it will come dressed in camo and dancing the Macarena,” one user darkly quipped. “When I first saw the Macarena dance craze sweep the nation in the 1990s, I knew, in my heart of hearts, that one day those dance steps would be enforced at gunpoint,” another joked.

“In a couple hours they’ll be doing the Macarena with their boots on your necks,” one angry user wrote. “The final ‘heeeey Macarena’ ends with them blasting their ARs into the crowd,” another added. “Imagine getting blinded with a rubber bullet by a guy who warmed up doing the Macarena,” a third chimed in.

“What if instead of doing The Macarena the police just do ‘The Not Brutalizing protesters’, one journalist commenting on the video suggested. “There’s got to be something in the middle of beating the crap out of people and doing the Macarena,” another wrote.

The outrage wasn’t limited to the traditional left/right divide, either, with well-known Trump supporter and conservative talk show host Ben Shapiro asking why, in the middle of the coronavirus pandemic, “you can’t say goodbye to your dying mother…you have to let your business die…you must remove your kids from school,” but “you can absolutely do the Macarena with woke protesters.”

there are indeed 2 Atlantas: the Atlanta where they’ll do the Macarena with an occupied army deployed to terrorize them, and the Atlanta that will steal those mf tanks and ride them around the neighborhood pic.twitter.com/oRKmczyy1l

Atlanta is one of dozens of cities to go into National Guard-enforced lockdown this week amid governors’ efforts to quell protests sparked by the May 25 police killing of 46-year-old African American George Floyd over his alleged passing of a counterfeit $20 bill to a Minneapolis vendor. White police officer Derek Chauvin knelt on Floyd’s neck for nearly 9 minutes as he lay on the street with his hands behind his back, choking him to death. Police officials’ failure to arrest Chauvin and his fellow officers immediately after the incident led protests to start in Minneapolis on May 26, and to spread to cities across America in the days that followed.

Although many of the demonstrations have remained peaceful, some have degenerated into acts of violence between law enforcement and residents, while some opportunists have taken advantage of unrest to engage in arson, looting, and destruction of property. At least 18 people have been killed in the violence, 16 of them with gunshot wounds, with more than 11,000 arrested.