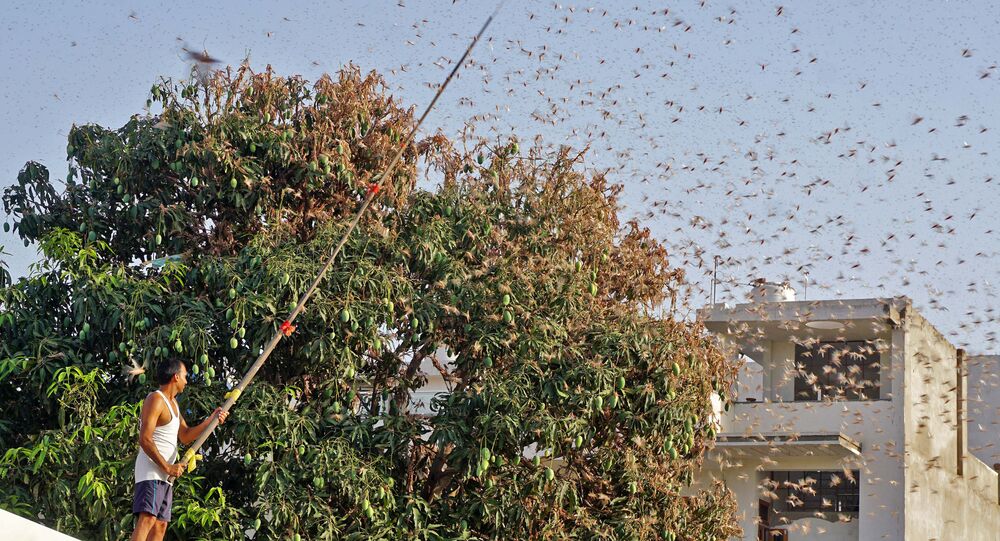 New Delhi (Sputnik): Swarms of locusts have invaded Indian farmlands from west of the country after wreaking havoc in parts of Iran and Pakistan, the latter even declared a national emergency earlier this year over one of its worst-ever locust attacks. The crop-munching swarms have already attacked five Indian states, with warnings for another 12.

In a desperate attempt to get rid of locusts, farmers in India appear to be getting creative, devising a two-pronged method involving a drum beat to possibly scare them off and a small fan to repel them with wind.

Rahul Shrivastav, an Indian police official, has shared a video of the innovative hack on Twitter. The 15-second viral video clip showed a plastic bottle erected on a pole, which had a fan on one end and a drum on the other. The instrument works on its own thanks to the wind.

While the effectiveness of the innovative equipment in warding off the “evil attackers” is still to be gauged, the farmers' creativity is tickling the funny bones of social media users.

They will start dancing for this music 😁

Yes.they start dancing for this and will get distracted for the very purpose they came in for: Eating everything that is green
😂😂

Several such videos have emerged on social media depicting farmers attempting to scare off the insects by using musical instruments, sirens, and even smoke since the insect is believed to be afraid of noise.

More updates on people trying get rid of the locust menace at their end...@ParveenKaswan pic.twitter.com/lfZHDr22rg

​The locusts entered India from Pakistan, first ravaging fields in Rajasthan and thereby proceeding to Madhya Pradesh, Uttar Pradesh, Gujarat, and Maharashtra. The locust invasion also reached southern India on Thursday, entering Andhra Pradesh. In Tamil Nadu, the crop-eaters munched on bananas, rubber, and other crops in some districts. The country is using drones to spray pesticides while taking other preventive measures.