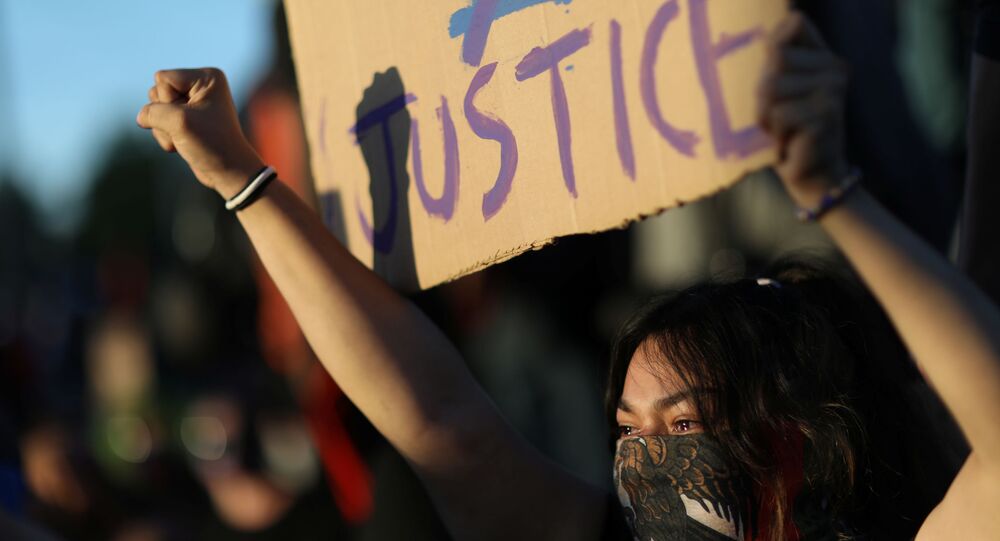 The prominent YouTuber was allegedly seen among a group of others trashing Fashion Square mall in Arizona, remorselessly grabbing clothes and fleeing the premises.

As large-scale protests erupted from coast to coast across the US over the death of a black man, George Floyd, at the hands of a Minneapolis police officer, many have paid attention to a protesting crowd being joined by Jake Paul, one of the highest-paid YouTubers in the world.

Netizens were enraged by what the vlogger filmed, as he along with a number of friends rushed into Fashion Square in Scottsdale, Arizona, and could allegedly be seen trashing it to steal clothes and accessories.

"Jake Paul, can u please go back to being an absolute disease in the comfort of your swamp of a YouTube channel so your idiocy can at the very least be contained so we can all ignore you in PEACE??", one protested against the YouTube big shot, known for making lifestyle vlogs, ostensibly looting the store. Many more echoed the stance:

JAKE PAUL IS LITERALLY THE BIGGEST SCUM ON THE PLANET.. HES LITERALLY LOOTING DURING THESE IMPORTANT PROTESTS... LIKE TAKE YOUR MILLION DOLLAR ASS BACK TO YOUR MANSION... YOU DONT NEED TO BE BREAKING SHIT... AND STEALING...
pic.twitter.com/cPCDGByJDD

jake paul has a 19 million dollar net worth and a giant platform consisting of mainly kids, and he’s out here looting whilst others get teargassed and beat? fuck off he really isn’t shit

Quite a few assumed it was his "white privilege" that they said allowed him to commit such activities without a twinge of conscience, as several videos surfaced online alleging Paul had himself embarked in the shameful looting.

Others en masse took umbrage with him for what they say is striving for clout:

"Jake Paul is using protests against the oppression and murder of black people for attention. He's a rich white man who could probably buy the mall he's currently looting, and has done nothing for the movement he's taking advantage of, and yet you're gonna criticise me?", a user wrote, while another another drew parallels between the vlogger, whose net worth is about $19 million, according to Wealthy Gorilla, and devoted, sincere demonstrators:

"Imagine being Jake Paul, one of the richest YouTube celebrities on the f**king planet. Looting a mall for clout while innocent black people and protesters are getting shot with rubber bullets", he stated emotionally.

AYO FUCK JAKE PAUL HES A WHITE BOY LOOTING A MALL FOR HIS OWN GAIN INSTEAD OF THE BLM MOVEMENT, NO ONE IN THIS MOVEMENT WILL STAND FOR THAT

Is this the same Jake Paul talking about taking action against social injustice out here looting and posting about it to an audience of 13 million? Either REALLY join the movement or take your privileged ass back to your mansion. pic.twitter.com/WWgh6aKdFw

The sweeping protests across the US against racism, police brutality, and impunity of law enforcement, which reached their peak over this weekend, have led to crowds wreaking havoc on enterprises and public order, as well as states calling in the National Guard to help suppress the unrest.

A slew of big cities like Denver, Miami, Los Angeles, etc. have resorted to curfews over the past few days, as what was designed as peaceful demonstrations have grown into reciprocal acts of violence, with vehicles burnt and tear gas fired into the protesters, enraged about George Floyd being suffocated to death during his arrest by now-former police officer Derek Chauvin.