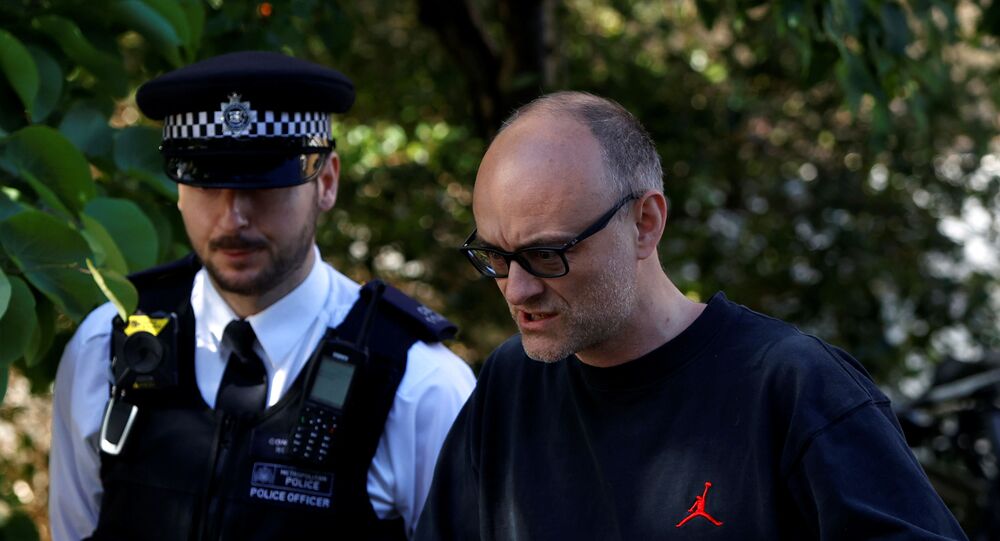 Did He Do it Again? Cummings is Spotted at Australian Rugby Match, But It's Just a Cardboard Cut-Out

Boris Johnson’s chief adviser Dominic Cummings came under fire this month after it emerged that he had potentially broken down the lockdown rules by travelling outside of London with his family while his wife was already displaying symptoms of coronavirus. The official, however, refused to admit any regret for his actions.

It looks like Johnson’s harshly criticised aide Dominic Cummings has not quite learned his lesson after he was seen “travelling” again. This time he was spotted even further from London. In Australia in fact, where he "watched" a rugby match between the Sydney Roosters and the South Sydney Rabbitohs on Friday. At least that is what social media joked after "spotting" a familiar face among the Roosters supporters.

Dominic Cummings at the Rugby League in Australia 😂😂😂😂 #NRL pic.twitter.com/ZIlBJwY6DP

It turned out to be nothing but a spoof by a creative fan who did not mind spending $22 to have a cardboard Cummings overseeing the game, as stadiums have allowed many supporters to show their allegiance to the teams in such a peculiar way, by placing paid-up cut-outs in the stands.

But in terms of Cummings’s situation, for many the fun was much more than a simple way of entertainment, with the political adviser currently facing increased scrutiny for a potential breach of lockdown rules and travelling as far as 425 km from London at the end of March to see his parents in Durham, when his wife was already stricken by coronavirus. The official justified the trip by saying that it was a necessary measure to make sure that his 4-year-old son would receive proper care in case he and his wife fall seriously ill, but many did not buy this argument. Neither did Cummings’ critics approve his detour from Durham to Barnard Castle fourteen days later which he said was needed to "test his eyesight" ahead of a drive back to London.

© REUTERS / HANNAH MCKAY
Dominic Cummings, special advisor for Britain's Prime Minister Boris Johnson as he arrives at his home in London following the outbreak of the coronavirus disease (COVID-19), London, Britain, May 25, 2020

Durham police has recently said that the official’s actions might have indeed been a “minor breach” of lockdown regulations but no actions would follow. Cummings has refused to admit any blame so far and leave the post despite calls urging his dismissal from many Labour politicians and members of the public.

Boris Johnson still defended his adviser, urging the public to “move on” from the scandal. But as the rugby game hoax has shown, many are still not ready to forget about Cummings’s travelling adventures.

“Dominic Cummings had many people questioning their eyesight when he was pictured at an NRL game in Australia!”, rugby reporter Gary Carter wrote on Twitter.

He’s at it again!!! Spotted at the rugby league in Australia #DominicCummings pic.twitter.com/uidQDOA8Jr

Dominic Cummings at the NRL over in Australia - what #lockdown rules? pic.twitter.com/3Z03ApJI31