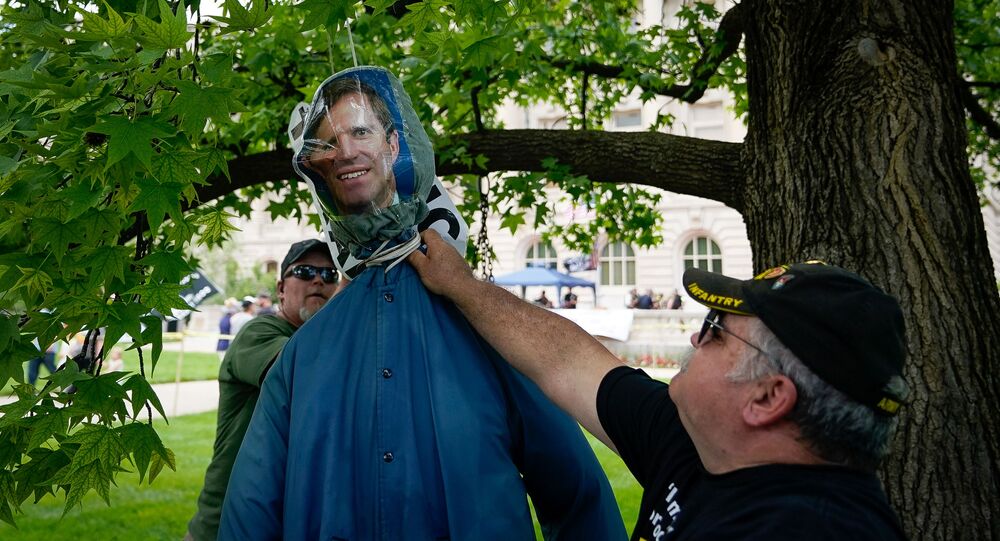 Terry Bush, a man who hanged an effigy of Kentucky Governor Andy Beshear on a tree outside the Kentucky State Capitol, has been fired from his job at an auto dealer.

In a statement Tuesday evening, the Neil Huffman Auto Group confirmed that it had terminated Bush following an internal review, stating that the organization “does not condone threats of violence in any form."

​The effigy was hanged from a tree during a Sunday protest rally in defense of constitutional rights such as the right to bear arms. The rally was also in protest of lockdown measures implemented by Beshear during the COVID-19 outbreak. Some of the protesters stood around Beshear’s mansion and chanted “Come out Andy” and “Resign Andy.”

The effigy also had a note around its neck with the Latin phrase “sic semper tyrannis” which translates to “thus always to tyrants” and was famously shouted by John Wilkes Booth after he shot US President Abraham Lincoln.

On Wednesday, Bush’s wife, Patsy, confirmed to the Courier-Journal that her husband had been fired from his job at the Neil Huffman Auto Group.

“He was fired because this governor is more important than the regular Joe out in this state trying to put food on their tables,” she told the outlet.

"When is his iron grip on this state going to end? How many more families is he going to devastate before the people realize how poisonous he really is?" Patsy asked, speaking of Beshear. "I heard him yesterday. He has no intention of lifting his grip on this state; he absolutely loves the fact that he believes he is so big. Listen to the way he states things and tell me he isn’t on some warped trip of power."

In a statement to CNN on Wednesday, Bush also confirmed that he had been fired. “My First Amendment [right] was violated while I was doing a First Amendment act,” Bush said, before noting that he wouldn’t be able to provide any additional comments.

On Wednesday, Beshear implied that Bush’s act was premeditated.

“You don’t simply, in the moment, make a dummy with somebody’s face on it, and hang it up. And you don’t just, in the moment, march a group over to stand on somebody’s porch, on the other side of the windowpane from where their kids play, and shout for them to come out,” Beshear is quoted as saying by Mercury News.

“Now I know both of those things that have happened, have been ways to create fear and show hate to numerous other people in America. And I don’t want to claim that I know how that history feels, but I think all of us would say that different decisions have consequences. And I would hope that we would all make better decisions like that, as we move forward,” Beshear added.

Beshear has promised to maintain Kentucky’s lockdown restrictions until there is a downward trend of reported COVID-19 cases in the state for at least two weeks. The latest data by Worldometer reveals that more than 9,000 cases have been confirmed in Kentucky, and at least 400 people have died as a result.

As Racial Conflicts Rise, US States Have Passed Laws Banning Protests: Is That American?