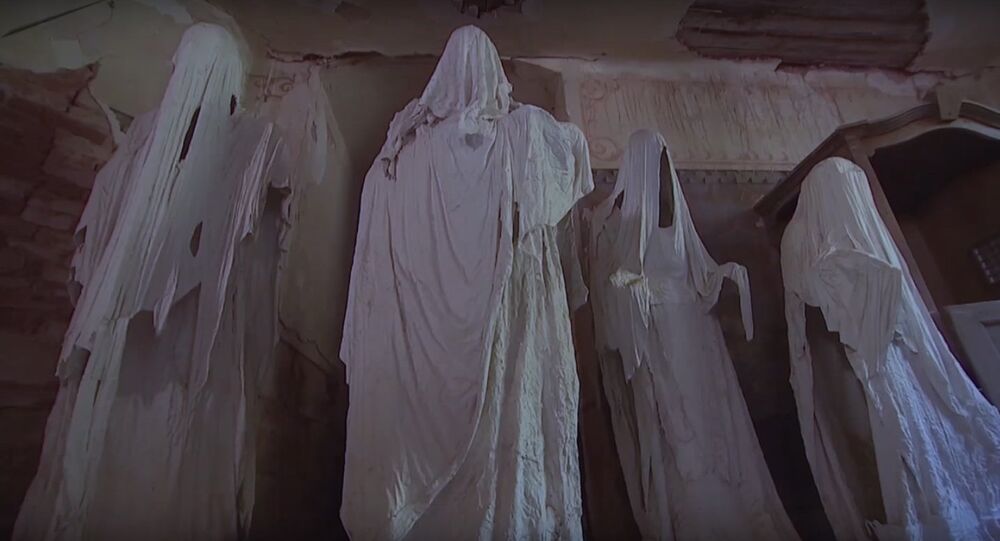 Locked Up With Ghosts: People in Quarantine Share Experience of Living in Haunted Houses

Reports of paranormal activity have spiked since the start of the pandemic. John E. L. Tenney, a former host of the TV show "Ghost Stalkers" and who describes himself as a paranormal researcher, said that prior to the outbreak he received five calls a month from people claiming to have encountered ghosts. Now he gets ten calls a week.

By now, we have all discovered how stressful self-isolation really is. Even if you don’t live alone and remain in lockdown with your loved ones, spending most of your time within four walls takes a toll on mental health, to say nothing of physical health. Now imagine being in self-isolation with ghosts…

Here is a list of people who were either lucky or unlucky to spend their lockdown in haunted houses.

Kerry Dunlap lives with his girlfriend Alexandra Cohl in a one-bedroom apartment in New York City. Dunlap, who works as a teacher and concert promoter, told The New York Times about his first encounter with a ghost that lives in the apartment. Dunlap said that one night he went to the bathroom, where saw a glowing lady in a green uniform. When he turned on the light, she disappeared. Several weeks ago, Dunlap claims the lady visited him again.

The 31-year-old said that at night, he frequently competes with his girlfriend over a small blanket. A few weeks ago, Dunlap woke up during the night because of what he thought was his girlfriend Alexandra adjusting the blanket at his feet. However, when the movement stopped, his significant other wasn't lying in bed beside him. Kerry called on her, but there was no answer. Several minutes later, his girlfriend came from the bathroom. Dunlap revealed that the friends whom the couple is subleasing the apartment from have also seen the lady, whom they described as an Asian woman of small stature.

Janie Cowan, 26, who works as a home health nurse, claims her house has been haunted since she went to college. The young woman named the ghost after the Apostle Matthew – which she hoped would make the apparition behave. She said that the phenomenon usually appears in the form of the sounds of someone running up and down the stairs at night. “It’s very clearly to get out attention”, said Janie’ husband Will. Both spouses agree that Matthew prefers Janie.

After the couple began self-isolating in March, Will decided to use the guest bathroom in the morning, as he didn’t want to disturb Janie, who had been working night shifts since the pandemic broke out. According to Will, Matthew didn’t appreciate his thoughtful decision.

The 31-year-old, who works as an accountant, said that on three occasions he was doused by Matthew with cold water when he was taking shower. Will insists there was no problem with the plumbing. Every time he was blasted with cold water, he found out that the hot water faucet had been turned off.

Brent Underwood, who lives in Cerro Gordo in California, has encountered what he described as phantom-like creatures. He claims that one night, books started flying from his shelf, which prompted his call to the ghost hunter, who blamed the incident on child ghosts living in his house. The incident left Brent extremely frightened, who now sleeps with his lights on.

"It’s particularly challenging during quarantine because I can’t have anyone else here with me for comfort. When you’re alone, it’s even more frightening. This is ridiculous, but I sleep with a golf club, and with the living room light on", said Brent.

"Tis the wind and nothing more"

Adrian Gomez, who works with IT support, describes himself as a fairly rational person, but said that events at his house have made him hide under his comforter out of fear, as though he were character in a horror movie. Gomez has been self-isolating together with his partner in Los Angeles. One night, the knob on the front door began to rattle so “vigorously” and loudly that Gomez and his partner heard it from the other side of the apartment. When he went out to check what caused the noise, he saw no one outside. In mid-April, another incident occurred that made Gomez freak out. A window shade in his room started shaking violently despite the fact that the window was closed and the shade on the other window remained absolutely still. Gomez and his partner have cats, but they were in another room and after examining the shade, he found no bugs, birds, or any other creatures that could have produced the sound.

Both Adrian and his partner have heard footsteps above their heads, but say that no one lives above them. "I’m a fairly rational person I try to think, 'What are the reasonable, tangible things that could be causing this?' But when I don’t have those answers, I start to think, 'Maybe something else is going on'", Gomez told The New York Times.

John E. L. Tenney, a former host of the TV show called "Ghost Stalkers" and who describes himself as a paranormal researcher, said most of the cases he receives have a natural explanation, noting that all the mysterious sounds people are now hearing were always there, but they simply didn’t notice them.

"When the sun comes up and the house starts to warm up, they’re usually at work — they’re not used to hearing the bricks pop and the wood expand. It’s not that the house wasn’t making those sounds. They just never had the time to notice it”, Tenney told The New York Times.

Kurt Gray, an associate professor at the University of North Carolina at Chapel Hill, said that during troubled times, there is an additional drive to find meaning in chaos, which sometimes makes people lend themselves to hauntings.

These mysterious encounters, Professor Gray notes, could also be a side effect of loneliness. "In quarantine, you are physically confined and also psychologically confined. Your world narrows. You’re trapped at home, you’re needing human contact — it’s comforting to think that there’s a supernatural agent here with you", said Kurt Gray.