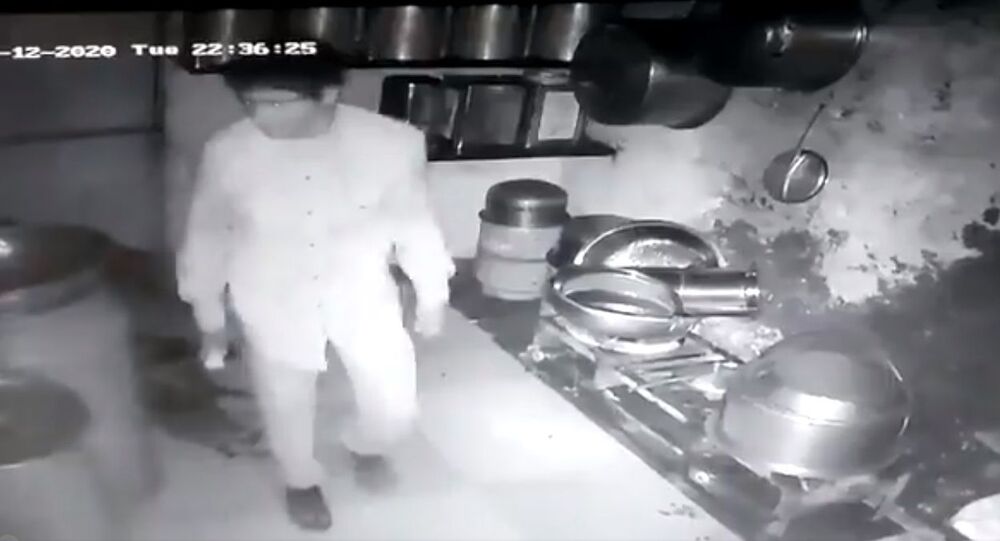 Thievery in Age of Corona: 5 Men Break Into Indian Eatery, Cook Food Before Fleeing With Leftovers

New Delhi (Sputnik): Desperate times call for desperate measures. While the lockdown has brought some people to the brink of starvation and left many unemployed, it seems to have given burglars a hard time too. In one such incident in India, they broke into a diner to satiate their hunger.

A group of men broke into a popular local Indian eatery in Gujarat’s Junagadh district and fled without stealing anything. However, the burglars did serve themselves, using the eatery's kitchen to cook some rice and potato curry.

In the CCTV footage from the eatery, a man with a flashlight in hand can be seen scanning the kitchen area and disconnecting the camera after spotting it.

Video: A group of five men breaks into an eatery in Gujarat's Junagadh town; cooks rice, potato curry to eat, leaves without stealing anything pic.twitter.com/pmNEl2gkI8

The owner of the eatery, Gajanan Parotha House well known for its food, told the local daily, the Ahmedabad Mirror, the burglars broke into the kitchen and started cooking. They used flour, potatoes, opened a can of oil and ghee to cook some food. After eating to their heart's content, they packed up the leftovers and left, he added.

India has been under a national lockdown to contain the spread of the contagious COVID-19 virus since 25 March. A lot of poor people are facing hardships due to the closure of markets and thus their source of livelihood.