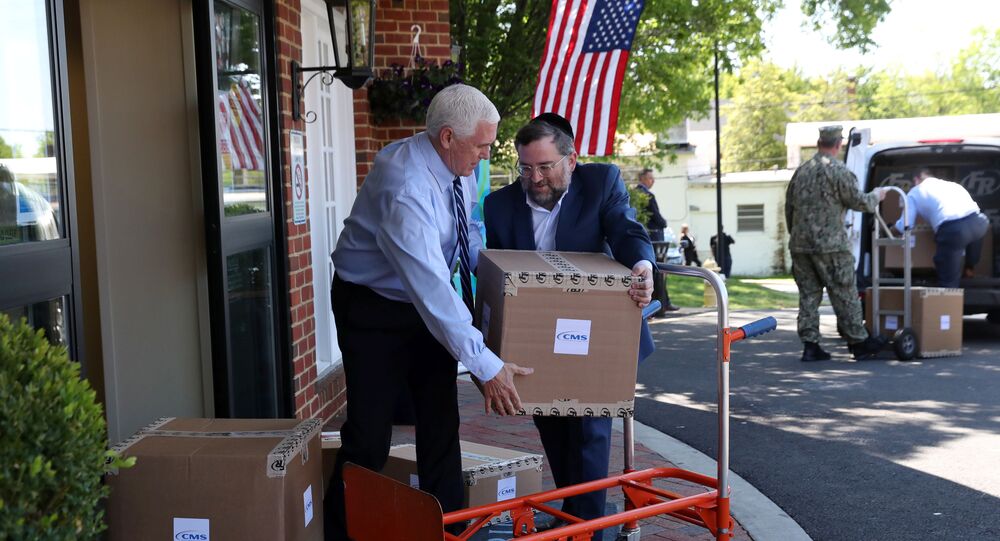 US Vice President Mike Pence’s comedy stylings were not recognized by social media users after late-night talk show host Jimmy Kimmel posted a selectively edited clip that made it appear as if the 60-year-old were hamming up a delivery of personal protective equipment (PPE).

A 40-second video clip from Kimmel’s Thursday monologue caused quite the stir on social media for several hours on Friday for its manipulated framing of Pence, who is observed in the video delivering boxes of PPE to the Woodbine Rehabilitation & Healthcare Center in Alexandria, Virginia, on May 7.

The clip was originally uploaded to Twitter by Kimmel himself, but the late-night host has since deleted the tweet, seen in a screenshot posted by Buzzfeed News’ David Mack. However, pollster Matt McDermott’s upload of the clip remains online and has received over 5.7 million views on Twitter and a “manipulated media” label by the site.

“And since it was going so well, and also because he didn’t realize he had a mic on, Magic Mike decided to keep it going. Listen in closely here,” Kimmel quipped while narrating the vice president’s delivery alongside Seema Verma, the administrator for the Centers for Medicare and Medicaid Services, and Navy Rear Adm. John Polowczyk.

“Those are empty, sir. We’re good to go,” a man is overheard saying in reference to the remaining boxes around the vehicle.

“Well can I carry the empty ones? Just for the camera?” Pence asked, immediately receiving a resounding “absolutely,” from the man thereafter.

McDermott’s tweet has received hundreds of thousands of engagements on the social media site within less than 12 hours. Many netizens took Kimmel and McDermott at their word and further spread a narrative that has since been determined to be false.

Mike Pence was pretending to lift and carry empty boxes of PPE. Please retweet and spread the word. pic.twitter.com/Rznfwb6r2w

That moment when a hot mic caught Pence asking “can I just carry the empty box for the photo op?” as he showed up at an Alexandria nursing home to deliver PPE without a mask.

Pence was caught on mic delivering empty boxes of PPE to a hospital.

Fuck the @GOP and this administration. pic.twitter.com/28uDy88V3B

Emmanuelle Saliba of NBC Investigates issued a tweet questioning McDermott’s characterization of the event. She, like many others, highlighted that the full CSPAN recording of Pence’s visit to the Alexandria center showed that no additional boxes were transported to the building after the vice president’s poorly received joke.

I went back to the original @cspan footage and sounds like @VP was making a joke about the empty boxes.

He doesn't carry those last boxes. He shuts the van doors and turns to speak CEO of @fedresources

Hours after Kimmel’s skit went live, the late-night talk show host fessed up to the mistake, later tweeting out his acknowledgement of Pence’s ill-received joke.

Kimmel ended the sour apology by writing, “I know how dearly this administration values truth.”

Despite the apology, it didn’t keep some folks from calling Twitter out. Ronna McDaniel, chair of the Republican National Committee, slammed Twitter in a Friday tweet, asserting that the social media platform was showing bias by not flagging the clip for manipulation.

However, it’s worth noting that the “manipulated media” advisory was present when Sputnik observed the video, less than an hour after McDaniel’s post at 3:10 p.m. local time.