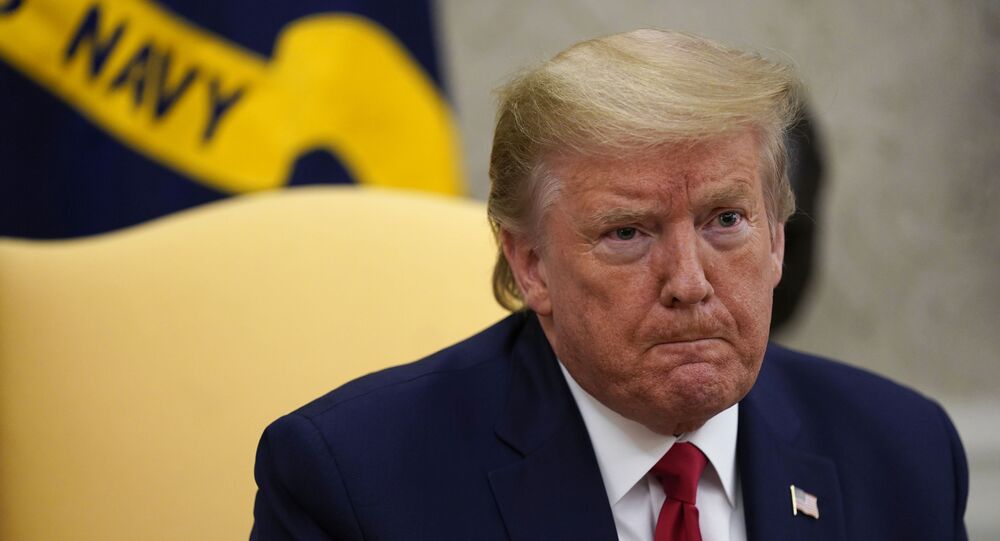 Earlier on Friday, the US Labour Department said in its monthly employment report that the United States lost a historic 20.5 million jobs in April due to lockdowns implemented to slow the spread of the ongoing novel coronavirus (COVID-19) pandemic, bumping up the nation’s unemployment rate to 14.7 percent.

The hashtag #TrumpDepression has been gathering popularity on Twitter amid the US Labour Department's report on April job losses and the historic rise of unemployment in the country, as well as a subsequent comment from US President Donald Trump on the startling unemployment numbers in which he claims that the statistics are “fully expected”.

The president on Friday said during an interview on “Fox & Friends”, that he cannot be blamed for the country’s loss of over 20 million jobs.

“It’s fully expected. There’s no surprise,” Trump said. “Somebody said, ‘Oh, look at this.’ Well, even the Democrats aren’t blaming me for that, but what I can do is I’ll bring it back”.

Trump told the hosts that he is confident that lost jobs will restored as soon as the coronavirus goes away.

Following Trump’s comments, Netizens took to Twitter to accuse the president of damaging the nation’s economy after failing to manage the country through the coronavirus pandemic.

#TrumpDepression is currently the #1 trending hashtag in the United States!! 👊 https://t.co/9U3HVxYrrk

#TrumpDepression is currently the #1 trending hashtag in the United States!

Nobody wants @realDonaldTrump too see how popular this is today...SO STOP RETWEETING THIS!

Please, HE GETS UPSET!

Trump is repeatedly criticized for responding too slowly and taking no significant action to address the COVID crisis, particularly at the early stages of its spread.

“#TrumpDepression could have ALL been prevented if Trump actually cared, didn't golf, and believed in science,” one user tweeted.

#TrumpDepression could have ALL been prevented if Trump actually cared, didn't golf, and believed in science. https://t.co/mDkYiAesvR

Trump couldn't even make money for investors during the biggest boom in the casino business in US history.

Did we really think he could manage something as large and complex as the US economy? #TrumpDepression pic.twitter.com/4KM0RpiWl9

Republicans are predatory capitalists who crash the economy and cause recessions to extract as much wealth as possible for the 1%. Democrats counter this by being regulatory capitalists but it’s not enough. The only way to save capitalism is democratic socialism. #TrumpDepression

Some users called for Trump to immediately step down and leave the office of the presidency, and some suggested that he is nothing more than a person who fails.

THIS is the current occupant if the White House. You have the power to EVICT him. #TrumpDepression #TrumpLiesAmericansDie #TrumpIsALaughingStock https://t.co/aWXySzkAGc

77,663 Americans are dead. Trump is the biggest failure ever. #TrumpDepression

I believe that @SenateGOP @HouseGOP are just as responsible for the botched response to #COVID19!

You didn’t remove his ass when you had more than enough to do so. #TrumpDepression #NovemberIsComing pic.twitter.com/nUeulZlZkL

Donald Trump is King Detritus. Everything he touches turns to shit. #TrumpDepression pic.twitter.com/kbGcBbex9V

Some users incorporated the hashtag to defend the president from the flood of criticism.

“When this all started I said leftists would attempt to force an economic recession in hopes of damaging Trump,” a Twitterian tweeted. “The #TrumpDepression hashtag proves they’re doing it openly: demanding continued lockdowns that unemploy millions, tank the economy and then blaming it on Trump”.

When this all started I said leftists would attempt to force an economic recession in hopes of damaging Trump.

The #TrumpDepression hashtag proves they’re doing it openly: demanding continued lockdowns that unemploy millions, tank the economy and then blaming it on Trump.

We were told the lockdown was to slow the spread so that hospitals will not get overwhelmed
Now that the hospitals are empty Democrat governors are continuing to lock down the economy & hold millions of Americans hostage all while they now scream #TrumpDepression ??