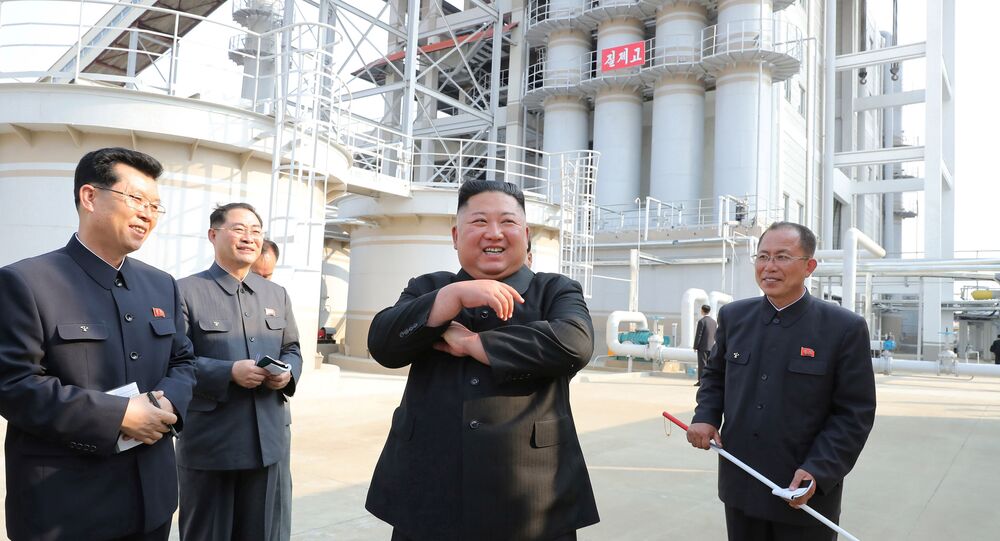 After weeks of speculation on his health or even death, North Korean leader Kim Jong Un recently reappeared in public, alive and well, opening a new fertilizer plant in Sunchon, an industrial city north of Pyongyang.

As new images of DPKR leader Kim Jong Un emerge from a 1 May ceremony opening a new fertilizer plant, new conspiracy theories suggesting that the person in the photographs is actually a 'double body' have sparked.

Following the ceremony, new images of Kim were released by North Korean state-run media, showing him with no signs of the previously reported "grave danger" or "deadly illness". Following the reappearance of the leader, some boosted a theory that Kim was using clones, comparing "old" and "new" photos of the North Korean leader and claiming that "those aren't the same man".

A lot of suggestions on Twitter claim that "it could absolutely be a dude with plastic surgery", while International Business Times said that "it is a well-known fact that Kim uses body doubles" and even travels with them to protect himself from "possible assassination attempts", an unproven assertion but for video footage in which Kim allegedly speaks to his 'lookalikes' who are facing away from the camera.

Some users, however, point out that the "analyzed" images may turn out to have been "heavily photoshopped".

FYI, the photo that's been circling around to prove that #KimJongUn was replaced by a body double has been heavily photoshopped. pic.twitter.com/ciKXprUn5V

​A lot of netizens expressed their scepticism for a newly introduced conspiracy.

Do you also believe global warming is a Chinese hoax?

Me: “conspiracy theorists are morons”

Me at 3 a.m. comparing pics of Kim Jong Un to see if he’s actually a clone: pic.twitter.com/mlcnkVDJmi

​Some even tried to engage into the conversation of Donald Trump and Kim Jong Un on Twitter and share the new ideas.

we all know ur a clone

​Several users remembered the good old story of a pop singer Avril Lavigne, who was also famously "dead" at some point.

New speculation has risen, as Kim Jong Un ended an almost month-long absence that began with him missing the anniversary of his grandfather's birthday in early April, followed by several reports of him being "gravely ill" due to what was alleged to have been "heart surgery".