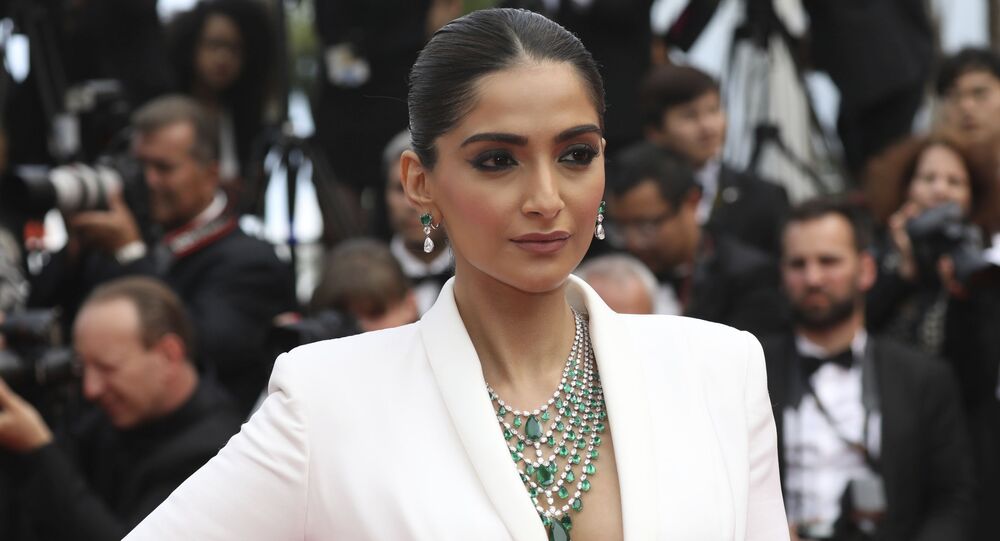 New Delhi (Sputnik): As the entire country is under lockdown amid the coronavirus pandemic, Bollywood stars have been keeping themselves and their fans entertained with throwback pictures, videos, and even giving sneak-peeks into their lives with snippets of at-home activities.

Fans exclaimed that Bollywood actress Sonam Kapoor looked breathtaking and ravishing as she shared an all-dramatic picture of herself striking a pose of a Bollywood film’s most iconic character, Mughal-e-Azam's Anarkali. The rare capture was a throwback picture from a magazine photoshoot.

Sonam transformed herself into a character of the film, in which Salim and Anarkali’s love story became a metaphor for lovers for decades in India.

While Sonam captioned it as “Pyaar kiya to darna kya ❤️” (why fear if you're in love) - a song from the movie - her pose replicated Madhubala’s look from another song in the movie, "Mohe Panghat Pe Nandlal".

The exquisite ornaments maang tikka (a traditional piece of head jewellery), nath (nose ring) and bangles completed her look along with the backdrop of dancers.

The 1960 movie Mughal-e-Azam was directed by noted filmmaker K. Asif, based on a play called Anarkali, written by Imtiaz Ali Taj in 1922.

The epic historical drama narrates the love story of young Prince Salim (played by Dilip Kumar) with courtesan Anarkali (played onscreen by Madhubala). Their love, however, did not find recognition by Akbar - the Mughal emperor and father of Prince Salim, later known as King Jehangir. At the end of the film (which is considered to be based on real events from the 16th century), Anarkali was ordered to be buried alive in the walls of the Lahore Fort by Emperor Akbar.