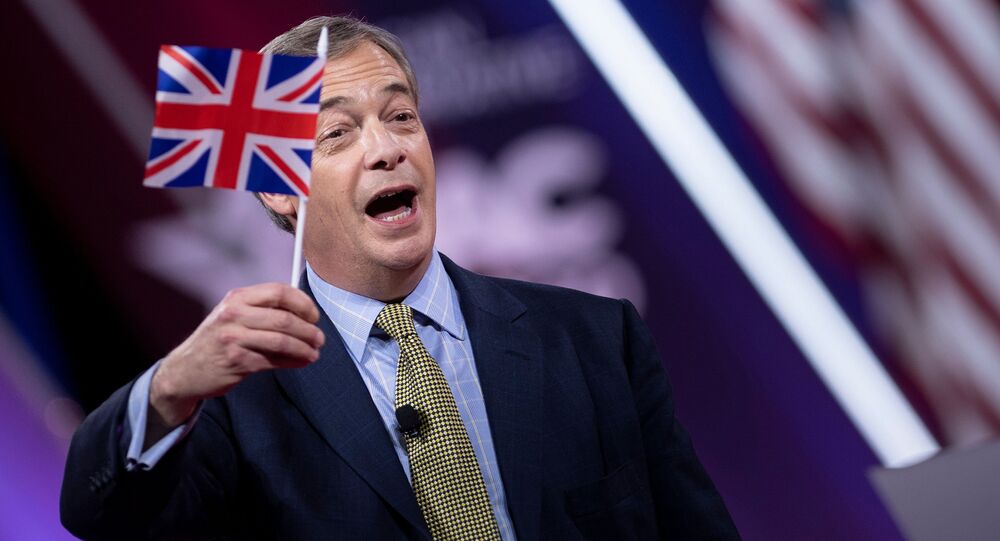 ‘We Can See Your Privates Nige’: Farage Flashes Shorts on Livestream and People Struggle to Unsee It

While much of the world population is self-isolating to sit out the coronavirus pandemic, politicians and other high-profile personas have ditched strict attire for cosier outfits while making video appearances – but the Brexit party leader’s choice was mocked by many as borderline NSFW.

Nigel Farage was probably feeling relaxed during his Wednesday livestream, but many people were not. The reason: a pair of overly short shorts.

The British MEP donned a pair of boxer shorts instead of trousers for a Q&A session on Facebook.

He spoke at length about globalisation, Britain’s strategic targets and response to the pandemic, but viewers’ attention was apparently distracted.

“He was sitting there like this,” Woodall said as she spread her legs, “but he had shorts on and he had the camera really far down and every other comment was ‘We can see your privates Nigel! Can you place your hand…?’”

Social media critics have been ruthless. “He looks like a divorcee sending a video message to the Russian bloke pretending to be his ‘girlfriend,’” one user joked.

“He looks like he’s going to gorge himself with toblerone and drive to Dundee in his bare feet,” another commenter quipped, referring to one of the famous episodes in the life of comedic character Alan Partridge.

What a piece of work is a man! How noble in reason, how infinite in faculty! In form and moving how express and admirable! In action how like an angel, in apprehension how like a god... pic.twitter.com/qmZc0sk4hM

Promise me once we are safe, & they have Nigel Farage spouting his 🇬🇧 pish on Question Time or anything else - just tweet this picture of him in lockdown, his denim shorts and that hamster (behind him) #BestofBritish🤡 pic.twitter.com/zBFy7DWkzh

Britain’s most powerful anti-smoking ad is a reminder that Nigel Farage is younger than Keir Starmer pic.twitter.com/dIIjaTHFjo

Onlyfans has let itself go a bit pic.twitter.com/3cSKmmyoxT

Some have pointed out the decorum at Farage’s home, which notably included a picture of a hamster behind his back.

Nothing to see here, just a normal guy wearing denim hotpants and a shirt and jumper with a Union Jack cushion and a picture of a hamster behind him.

Just when you thought 2020 couldn't get any worse we have a pic of a half naked Farage in a Boy Scouts uniform posing infront of a dead squirrel in a jam jar.

I really wish I was making this up. pic.twitter.com/3QMptZV7Oz